Recife: The Playable City Part One

Recife: The Playable City part one kicked off on 8th January at Watershed in Bristol. In collaboration with the British Council and Porto Digital, we were delighted to host a diverse group of 20 artists, creative producers and creative technologists from Pernambuco (Brazil) and the United Kingdom for 10 days at Pervasive Media Studio. Through a series of presentations, workshops, talks and making, we challenged the group to consider how playful interactions might change the way we inhabit and interact with our cities. We asked them to look past a corporate drive to make cities smart and think about what the joyful, yet still meaningful, implications of using technology in our environment might be. 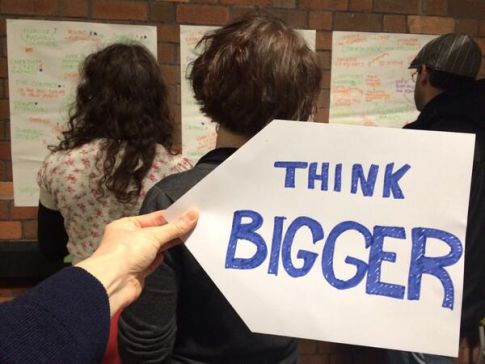 As the cohort introduced themselves and their work on day one of the programme, a wide range of skills and talents quickly became apparent. We heard from choreographers, programmers, theatre producers, games designers and more besides. We’re truly excited about what collaborations between these practitioners could bring.

There was an arc of thinking to the design of part one. This was the first time the group had met, and other than the information in the application pack, the first time they were asked to really engage with what the term ‘Playable City’ could mean in the context of Recife. So we began with a series of exercises over four days, which both enabled exploration of the concept, introductions to Recife and a chance to know each other better. These included:

The creation of Playable City bunting which was not just a chance to add colourful adornments to the Pervasive Media Studio’s event space, but proffered suggestion on what playable might be and it’s potential for causing change. It also completely transformed the atmosphere of the space in which we were working, which was interesting in itself.

A Lego Serious Play Workshop with Stuart Nolan, which explored metaphor and the way in which we as societies, place meaning and value on objects within our cities. The aim of the session was to provoke thought into how we assign value to our environments and the objects within it, and how Playable City projects might intervene, change or play on these values.

This was followed by a workshop with Creative Technologist Pete Bennett, who asked participants to design fictional city interventions using randomly selected technologies, locations and affects. The sometimes-unexpected combinations were designed to provoke thinking beyond the obvious, and encourage participants to consider the different elements that could contribute to a Playable City project.

On day four, the learning from the past days was brought together in a workshop led by Ludic Rooms, in which participants were asked to go out and create a series of playable interventions in the city, which directly engaged the public. We were so lucky that the weather was surprisingly sunny that day and as always, the citizens of Bristol were more than happy to participate in a few playful experiences. 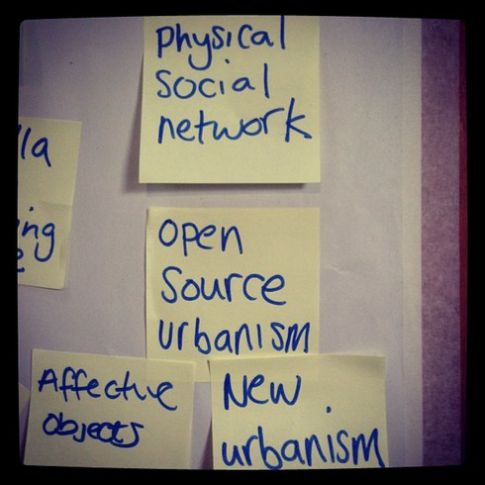 It was a packed first few days, in which we also undertook a great interactive session led by the Brazilian participants introducing the city of Recife, and to add to the thinking, peppered activities with inspiring talks including:

An overview of the Playable City concept from Clare Reddington Director of Pervasive Media Studio, with pointers to other interesting projects out there.

An exploration into the Aesthetics of Playable Cities and introduction to the Pervasive Media Cookbook with UWE’s Professor Jon Dovey.

A great conversation between Dick Penny, Managing Director of Watershed and Stephen Hilton, Director of the Futures Group at Bristol City Council, on the 15 year evolution of Bristol as a Playable City and how partners in the City work together to make things happen.

A talk by Duncan Speakman about his work as an artist, and how as part of Circumstance, he creates emotive cinematic experiences in public spaces. Placing his work in a Playable Cities context, he discussed how his ideas are scalable and replicable across cities globally.

And on a more practical note, Producer and Consultant Kim Plowright talked through the lifecycle of projects – from development to post-release – discussing how the differing emotional journeys of producer, artist and audience, can impact upon a project.

Having collected together talented artists and producers from the UK and Brazil, the first few days sought engage thinking around play and urban space, moving beyond structures and boundaries that are often thought to define urban landscapes.

Week two saw the participants split into mixed project groups (each group including artists, technologists and producers from Brazil and the UK), to begin exploring and prototyping potential Playable City ideas for Recife. Again peppered with visits from speakers such as:

Jo Reid, from Calvium, who discussed experience design and user testing drawing on case studies, which included her work with Historic Royal Palaces.

Sarah Ellis, from the Royal Shakespeare Company, who spoke about their work with Google on Midsummer Night's Dreaming. The project explored the ways the RSC might use technology to interact with their audiences more playfully;

Naomi Fuller from Playing Out, spoke about activating play in local neighbourhoods;

And futurologist Bill Sharpe, who delivered a workshop with the group on the Three Horizons, a practical framework for thinking about the future.

Each participant teased out aspects of the process in their own blogs. For Producer Isabelle Croissant the experience has been one of stepping outside her comfort zone, whilst Katherine Jewkes has begun to consider how we can re-claim our streets. Daniel de Hora sees the project as ‘a chance of getting involved in ideas that can connect people, governments and brands in a new and fresh way’, whilst technologist Filipe Calegario reflects on the process and the opportunities and challenges it offers. Each participant offers a differing viewpoint and they’re well worth a read. 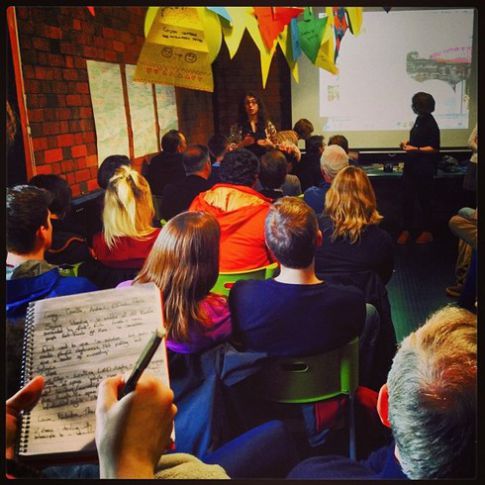 On their final day in Bristol the group took over the Pervasive Media Studio’s lunchtime talk in order to present some of the ideas generated, iterated and rejected over the course of the week. We heard about the potential of Aquatic Pathways to help Recife overcome some of its traffic issues; the possibility of doorways placed throughout the city, that produce narratives when members of the public walk through them; telescopes that offer kaleidoscopic views on the city; sonic branches that connect people through music; games in bus stops; and enchanted forests that promote social cohesion.

In April there will be a second session, which will see our UK participants head over to Recife. During this part, the ideas generated in Bristol will be developed further, culminating in a public showcase of work in Recife. We’re extremely excited about it and hope you can follow our progress along the way.

Follow Recife: The Playable City by using our hashtag: #playablecity, visiting our Storify (rounding up tweets etc from the programme), and reading and commenting on participant journals.