David shares his experiences from Sports Hackathon at YCAM.

David was Creative Technologist at Watershed from end of 2013 to spring 2019.

The event sits in the YCAM Sports Research Project and is designed to question what future sports might look like and how technology could aid these sports.

After two days of generating and testing numerous new ideas and sports, YCAM hosted the 'Yamaguchi Future Sports Day' which brought together both local and distant communities to take part in probably the best sports day ever. Over 200 people joined the developlayers, separated into four teams to compete against each other playing the newly created sports.

What were we going to do?

We were tasked with creating numerous new sports, that could be played by the public. The sports had to adhere to simple criteria: 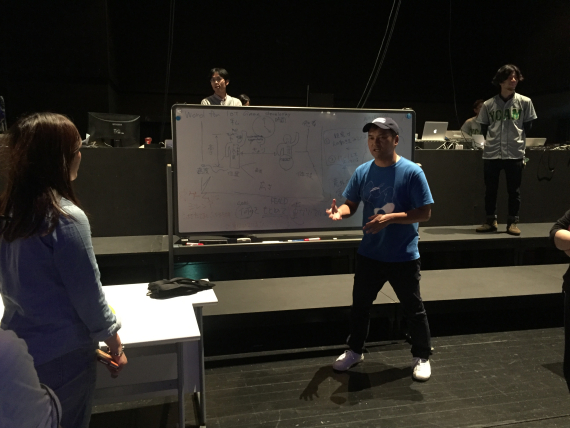 How were we going to do it?

We had a dizzying array of tools at our disposal from giant inflatable bowling pins to bean bags, Zorb Balls to tug of war ropes.

In addition to these, the YCAM team had created a number of technological tools that could be reconfigured and repurposed for the sports.

Tetris Maker: uses a Microsoft Kinect to capture the user and abstract their body into Tetris blocks. Users then could move the block around like a regular game of Tetris using physical buttons. 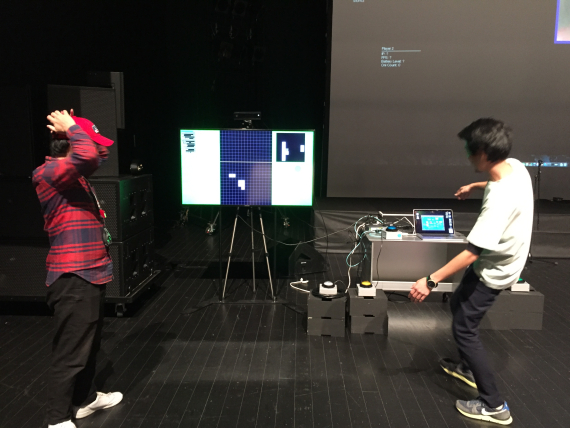 YCAM Stick: a double sword-like object, that had a magnet in one sword and magnetic sensor in the other. An LED strip showed when the magnet was in range. The connection status was sent over the WiFi to a game controler that could be reconfigured. 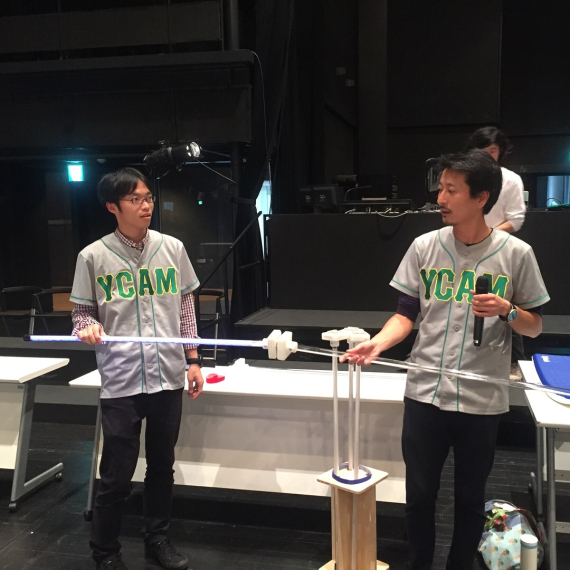 MoCap system: a traditional MoCap system that used retroreflective balls and special infrared cameras to calculate where an object was in real space. 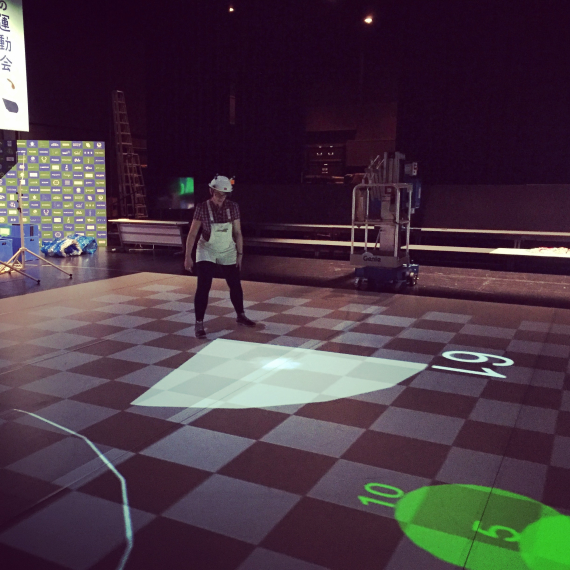 Parallel Eyes: a system that showed the player the visual viewpoint of other players through a headset.

If necessary, people could make their own tools or systems up during the hack as long as they adhered to the sport's rules.

Here is a summary of some of the sports generated during the hackathon and how people played them. (please note that these are rough translations of the names.)

Shaking Race was a game where two teams played against each other, to score the highest points. Each team had two balls - one positive, one negative. The teams would have to shake the positive ball to increase their score whilst passing it to the next team member. The player would then run to the front of the queue, where the negative ball would have to be passed as gently as possible to the next team member. If you were too vigorous with the negative ball your score was decreased - bonus points were given to the team who completed the most loops.

Hungry Kaba is loosely based on the Hungry Hippos board game. It involved all four teams, both children, and adults. One player wears the MoCap Helmet, the other player moves them around the game arena like a wheelbarrow.

The aim of the game was to outscore your opponents by collecting projected tokens on the floor. Circles were worth one point, Squares two points and Stars three points. The team with the highest score at the end of six minutes won. However, you had a limited amount of time per pair, as you had to be back inside your team's safe zone to swap players,before the timer ran out otherwise you were docked points.

Parents Roles involved two teams. The teams selected two sub-teams, usually adults and children. The aim of the game was to roll the adults (now inside giant zorbs) to the other side of the room. The first team to move all of the adults won.

Trisha Run was an obstacle course for two teams, using the YCAM Sticks. The aim of the game was to keep the Sticks connected whilst navigating the obstacles. If the Sticks were disconnected the team's points were decreased. The team with the most points won.

Hungry Wani was a blend of numerous games such as musical chairs, what's the time Mr. Wolf and British bulldog. The teams would dance in the game area (which was the sea), avoiding crocodiles until the music changed. The teams would have a set time to get to a safe zone. These safe zones or islands were generated randomly and only appeared two seconds before the music stopped. If any team members weren't on the islands after the music stopped they were out.  An overloaded Island could sink, in which case anyone who was suddenly in the water would be eliminated. There were five rounds of the game: after each round the number of islands would reduce as well as the size, placement, and island stability. There was also a player from each team who was a 'Wani' who could catch anyone during the 'hawaian dance'. 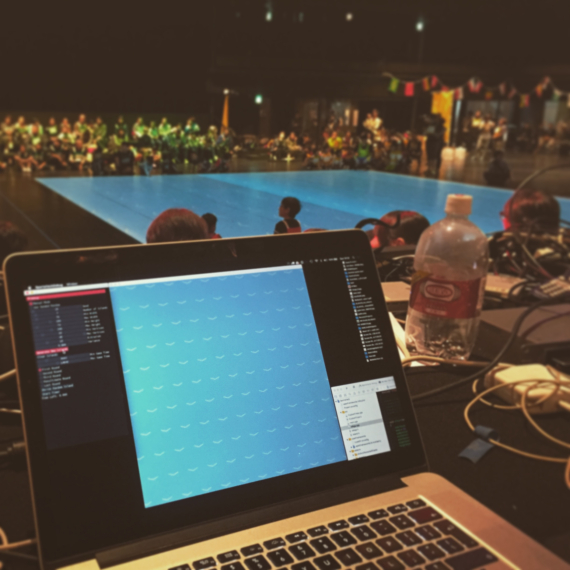 Extreme Tama-iry was probably one of the best fusion games, combining a traditional Japanese Undokai game with effective tech. Two teams faced each other to try and get the most balls into the opposing team's basket. Each ball was worth 1 point, but you could get 20 extra points if you managed to get the golden ball in the basket.  However, the baskets were attached to a member of the defending team who could move around. They had one of the YCAM Ball iPods attached to the basket, and if they moved too vigourously the team would lose points. The team with the most points won.

Kingpin was the final game, it involved all four teams and each team was split into two - throwers and shouters. The aim of the game was to try and topple a giant inflatable bowling pin into your team's area. The shouters would make as much noise as possible to increase the size of the team's win area, whilst the thrower would attempt to knock the pin down using small bean bags.

What is wrong with political polls?

Andy Littledale first joined the Studio as part of his role as a consultant producer at the BBC. He set up his own revolutionary TV analytics company SecondSync which was acquired by twitter in 2014, after which Andy became…