Find out about our latest Residency, supporting Amy Draper, Nina Dunn and Tessa Bide to integrate gestural technologies into Bob, a magical theatre piece for families...

“Bob  bob bob  bob, bobbobbobbob” I’m sitting in the Studio events space listening to Amy Draper, Nina Dunn and Tessa Bide as they play out the character of Bob, a blob of light currently dancing about on the brick interior. 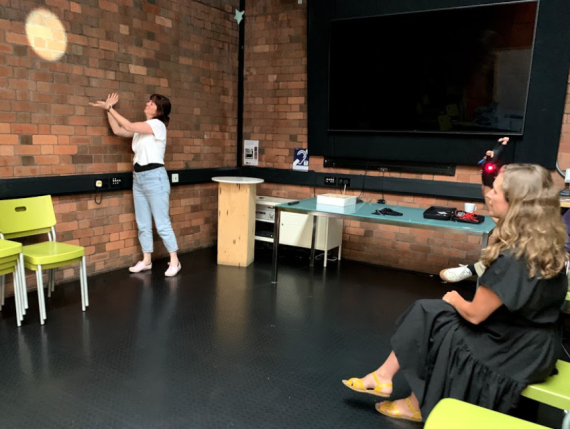 Image of Amy and Nina testing the MI.MU gloves

The trio have joined us on a three day research residency to develop Bob, the central character in a theatre piece the group are currently making. In the piece two friends meet Bob, a blob of light, and their world becomes brighter with him inside of it. With him they play games, make adventures and explore. But one day Bob fades away and the two are left to come to terms with his unexpected disappearance from their lives.

Made for family audiences, the show will use interactive live projections, light manipulation, movement and sound to explore bereavement and loss in a playful, accessible and truthful way for young people.

The aim of this residency is to explore the best and most fluid way to perform Bob. So we’re spending some time looking at a range of interfaces, to better understand how the character of Bob could be played rather than simply controlled. Interfaces we’re testing include:

Yes, we are spending a lot of time tinkering with tech and staring at a blob of white light on the wall. But, Bob is coming to life! And the room is buzzing with ideas, thoughts and enthusiasm.

Amy says: "We first workshopped Bob in 2017 at the Royal Shakespeare Company, where we developed the concept of the show but had to use quite rudimentary technology to bring the central character to life. This residency at the Pervasive Media Studio is an essential next step for the project - we can’t take the show further until we test and explore various possibilities to create an intuitive, user-friendly piece of technology with which our performer can puppeteer Bob. The aim for the end of the workshop is to have decided which direction to go in - and so far we have discovered a lot of brilliant options to enable us to give Bob intention, emotion and interaction with the other characters. Watch this space!"

Just halfway through and we’re already uncovering so many possibilities. We’re massively excited to see what will happen next.

Bob is entering an R&D in Autumn 2019. It will be part of Bristol Ferment and go on to tour nationally and internationally in 2020. Bob is a Tessa Bide Productions show supported by Arts Council England.

Catching up with our Artists in Residence

Our call for the Winter Residencies programme is currently open, so we thought this was a good time to let you know what our last cohort of funded resident artists have been up to...

Stepping into Virtual Reality - where to begin?

This is the second in a series of articles, commissioned by Watershed & Arts Council England, to act as a resource for artists looking to work with art and emerging technologies in the South West.