Watching the Augmentors: how an accelerator for VR and AR brings the near future into focus

Gill Wildman is the Business Development Advisor for Watershed and the South West Creative Technology Network. In this Blog she writes about her recent experiences of mentoring on Digital Catapult's Augmentor programme.

After three months of mentoring and training sessions, a group of 8 VR & AR companies pitched their business ideas to a room full of industry and investor folk on the 9th floor next to Kings Cross Station in London. Who knows what actual deals were done, but the talking continued for hours after the event had finished. Not that deals happen precisely at these events, but the being close up to investors really helps to build confidence in speaking with them, improving the chance of future money.

Here are the stats: 120 companies have applied, and over the course of the 3 programme runs £3,181,000 raised in investment and £416,000 received in grants by immersive experience participant companies so far. The balance of people is better than most startup programmes I’ve seen: of the 8 companies, half of them run by women, and three by people of colour. They have 50 partner companies and 80 mentors (including me), and are about to open up a new call in May 2020 for their 4th cohort.

This final session for Augmentor is a showcase, a fairly traditional half day of hearing from an investor panel about what’s interesting to them, and what they think AR and VR startups should be focussed on. It is mirrored by a panel of industry folk, who are developing hardware, software, platforms and their perspective on the future is compelling - as they are people engaged with the hard end of VR - selling VR in applications, content, tools and devices. Sandwiched in between these two panels was a set of pitches by the companies who put their hats in the ring for this immersive accellerator run by Digital Catapult now for its third cohort. 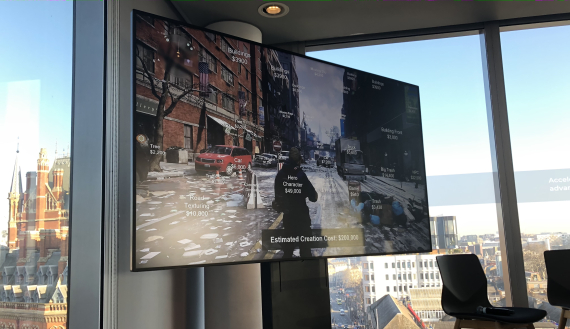 Augmentor is designed to support early VR and AR ideas as they navigate a lack of established market, and slow adoption. Lea Gregorka from the Catapult described a specific set of obstacles to mass adoption, including UX, content, reluctance, legal risks, financing and costs.

Investors, what’s particular about investing in immersive? Denise Xifara explained how entrepreneurs need also to educate investors about a market that is about to happen, to excite and catalyse some activity. We know that investors use these accelerators to filter companies to pay attention to: Fabio La Franca cared how investors still see this sector as risky but “there has to be a dialogue with the entrepreneurs” and how important it is to “understand the biz model of your VC.”

Dave Haynes, clearly impressed with the passion of the pitching companies advised the cohort to not pigeonhole themselves as AR and VR, but more about creative studios/companies who solve problems and to “keep doing what’s you’re doing”.

Where's the future coming from? Fabio from Station 12 suggests gaming, education, and the production of content with strong IP such as Dr Who or Peaky Blinders; Hannah Williamson talked about hardware, location based immersion and B2B being more interesting to Edge Investments, and applications that cross borders, such as learning instruments in VR, designing in 3D, and new ways of telling stories. Denise Xifara looks for tools for developers, analytics, real problem solving, whereas Dave Haynes pointed to the role that new headsets play, and how that has resulted in a flow of consumer apps.

How does an accelerator shows its value? What was so impressive was how they significantly improved their clarity of ideas and market fit in just three months. Some had made huge connections with their markets - one with planners and planning departments, others explored the value of real time biometric data in the applications to give a closer sense of what was taking place in the user. Some used the accelerator to make connections, others to get SEIS and EIS pre-approval, many developed their business models, and others used the proximity to investors to form relationships.

What’s the industry view on this? Faisal Gulain from Blippar says the constituent parts are nearly all here for the leap this  ecology needs to take. Julian Randall from Unity talked about the breakthrough in VR that the standalone headset represents, and how we can now see people trying stuff freely. His question is that while we’re growing the ecosystem, how do we support creatives in this period of rapid change? Ben Lumsden from Epic Games pondered on whether we are finally reaping the promise of this technology, in that one asset designed by a car manufacturer sees its way into a film. James Watson from Immerse.io talked about the quantity of VR/AR data coming out of this year, so companies such as these will be able to have more confident conversations about future ROI. Leila Martine from Microsoft believes that this is the 3rd computing platform: that its all about the ecosystem play, digitising assets for assembly and manufacturing, and taking them into marketing and sales.

What’s the next challenge? All agreed that the industry is moving at a very fast pace with new hardware, use cases and opportunities emerging everyday.  Julian from Unity talked about a big shift “It has shifted away from why to how” whist James reminded the audience to be mindful of revenue, and react to what the market is telling you. Leila Martine from Microsoft shared her experience that many large organisations are discovering 100% improvements in training in VR and massive reduction in errors as a result. The major pain points are still UI and UX - for example putting a headset on a factory worker doesn’t work simply because the experience does not look similar enough to the daily environment they work in, or the work they do.

What was heartwarming was to see how the industry has a range of commitments to help the sector develop. Julian Randall from Unity talked about how Unity are in a process of re-architecting the whole thing including Unity Tiny, a web deployable version for making instant experiences. https://forum.unity.com/threads/oct-2019-update-on-project-tiny-roadmap.754850/ and their MARS studio https://unity.com/unity/features/mars Ben Lumsden mentioned Epic Games huge investment in the future - they have mega grants for content and startups working with Unreal Engine. £100m pre cash no strings investment over the next 5 years (£5-500k). https://www.unrealengine.com/en-US/megagrants

With no time for questions the pitching companies could rest - its thankfully not the kind of grilling that the most ruthless programmes host, and its so much the better for it. Anyone can ask founders what they need after the event, over lunch, and with the time to be able to reply clearly, without a bigger audience. It feels so much more humane! There might be few AR/VR stocks in the market right now, but soon there will be, possibly coming out of Augmentor.

The next cohort call is going to be open in May 2020, and if you are looking at VR and AR, there is a lot to be found in plunging your idea through this programme.

You can watch a film about it here.

Difference and diversity at the intersection of art and technology

This is the third in a series of articles commissioned by Watershed and Arts Council England as a resource for artists looking to work with art and emerging technologies in the South West.