will you sing for us?

Last week we recorded some people singing love songs for the first time in our motorhome.

In 2018, Gemma & James will set off on a 6 month long journey to every country in Europe. Along the way, they'll record people singing love songs to add to a continuous transmission, broadcast from the edges of the continent. 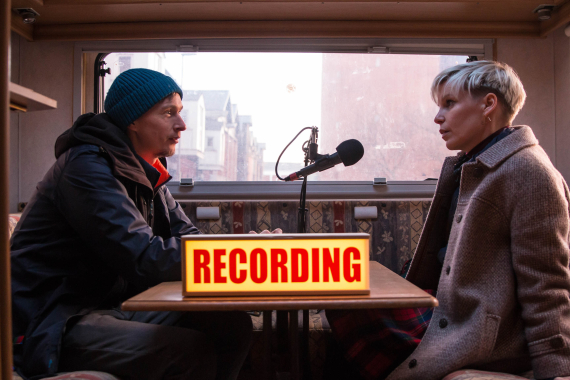 Last week we recorded some people singing love songs for the first time in our motorhome. Up until now the whole concept for this huge project we’re undertaking has been reliant on an idea that remained untested. The idea that people would be willing to come into our motorhome, sit opposite a stranger and sing a love song.

A few people have asked us how we might get people to do it. What tactics might we deploy to persuade people. We’ve spent a lot of time thinking about the invite and how its framed but mostly in terms of design. What the motorhome looks like, what a person sees when they walk past and how easy it is to get a sense of what the offer is. But we’ve spoken less about methods of persuasion. We’ve been very clear that we want to avoid anything that feels shouty, or anything that feels anything like those promotional vans you see in public places. We want the invite to be clear and transparent (i.e. not a trick) but gentle. Because this project is about communication and connection and at its core we’re asking questions about how we listen and how we hear/feel what each other is feeling, it doesn’t seem right to use methods of communication that are borrowed from capitalism or politics. We don’t want to use marketing tricks or ploys; we want to allow space.

But the question remains ‘What if people don’t want to sing for us?’. Last week was the first time we were able to test that question and find out what it means to make the invite and what it feels like to be sung to for both us and the person singing.

We’ve made lots of work in the past that involves co-operation or collaboration from an audience or from one-on-one participants and one thing we’ve learnt over that time is that somewhat counter intuitively, there is very rarely any problem with audience involvement. There are always people willing and enthusiastic to take part almost whatever it is you’re asking. And its often not the people you expect either. On opening the door to our motorhome for this test-out the same scenario played out. We imagined there might be some tentative people looking in, and a slow burn but in fact as soon as we started the first person was in the motorhome and ready to go! We did no encouraging at all. It was just a case of making the offer, and people were willing. The results were beautiful. The emotional impact of someone allowing themselves to be slightly vulnerable in that way and to sing something heartfelt was beyond our expectations and the recordings we got were just gorgeous.

We know that it won’t always be easy, there’s a degree to which the context helped us out of course, and as we travel around Europe we know that different cultures will have different expectations around singing, and possibly around public performance too and different contexts will feel more inviting to audiences than others but right now we feel really encouraged that the eventual library of love songs we collect will be a really special document. We can’t wait to set off!

If you want to hear the recordings we made (and the future ones too) they’ll be transmitting from a beacon in Bristol soon. Keep an eye on our website and we’ll let you know when its live and how to hear them.