The fluid form of whalesong and [whalesong]

Natural whalesong exists in flux with its environment, changing its motifs as the creator moves through the ocean. Here's some stuff about it and how it's inspired my sound piece.

One of the 2019/2020 winter residency programme residents, working on a human-computer duet, [whalesong].

A sound performance on choice, voice and our impending doom. In development at the Pervasive Media Studio. 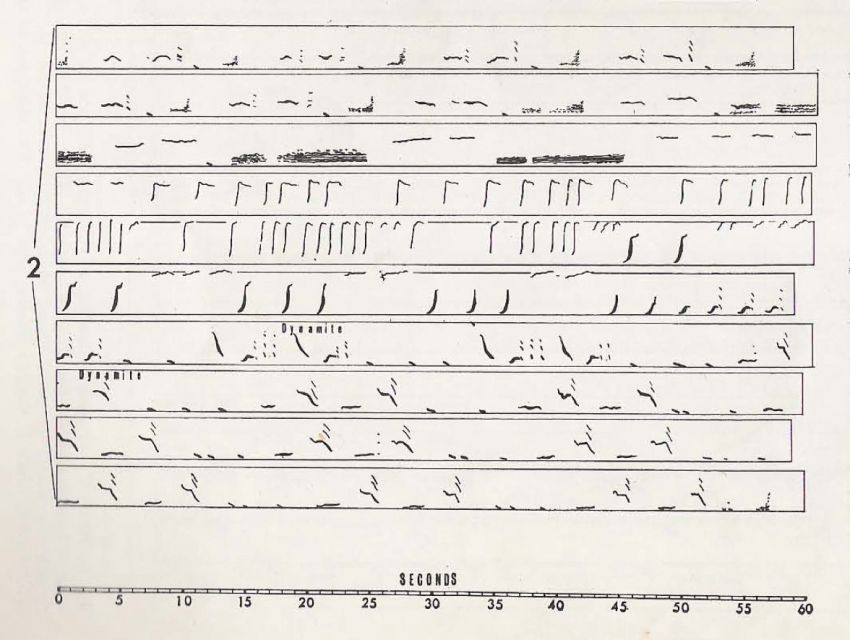 A graphic score of whalesong, annotated by marine biologist and environmentalist Roger Payne.

Whales' songs have an immediate sense of being connected to human musical forms. From our perspective, motifs are created, repeated, varied, developed and concluded in connection with other motifs. It's probably quite short-sighted and anthropocentric to start analysing it from a musicological perspective - the interpretation as music is pretty interesting in and of itself. I guess it says something about our desire to impose structure or order onto things we don't understand; that doesn't necessarily mean the order isn't there. Whales, like humans, are social creatures, and sound underwater, being as important as vision on the land, is first and foremost a tool to communicate, make sense of and change the world. What we call form is maybe just the way the world changes over time, and our attempts to guide it to do so. Music is in a sense, at least compared to visual arts, pure form.

A structural analysis of humpback whalesong by mathematician-naturalists Hella and Scott McVay.

Whalesong appears to be made up of individual units, or motifs, which together create phrases, which combine to create themes, which follow each other to make a song, which in turn is repeated several times over each song session. The precise linguistics of pretty much any of these sections is still a bit of a mystery, which is probably how the whales like it. From what I've seen and analysed, it looks like these repeating cells of semantic information are subject to gradual changes. From a micro to a macro-scale, the songs are constantly in conversation with the aural environment they exist in. Maybe they react to other whales' songs, to changes in the sea, stories and conversations between pods. They certainly change when in the presence of human sound - altering pitch and volume to be heard over anthropogenic noise - but I wonder how much information they communicate across the ocean. Maybe it's me being too much of a posthumanist but I don't think it's as simple to say it's like songlines - the pull of new age ways of thinking is always present when thinking about cetacean intelligence and I think that can be really dangerous (that's for another blog post). Whales' cognitive, emotional and auditory perception is incredibly acute so regardless of intent, it's clear there's a lot of factors that affect the creation and reception of a voice.

I'm attempting to make a performance that, at its core, has a flexible structure just like whalesong. I think it's the best way to celebrate the diversity of whales' voices without sampling them; sampling them leads to me having power over another sentient's voice, and I'm not going to do that. 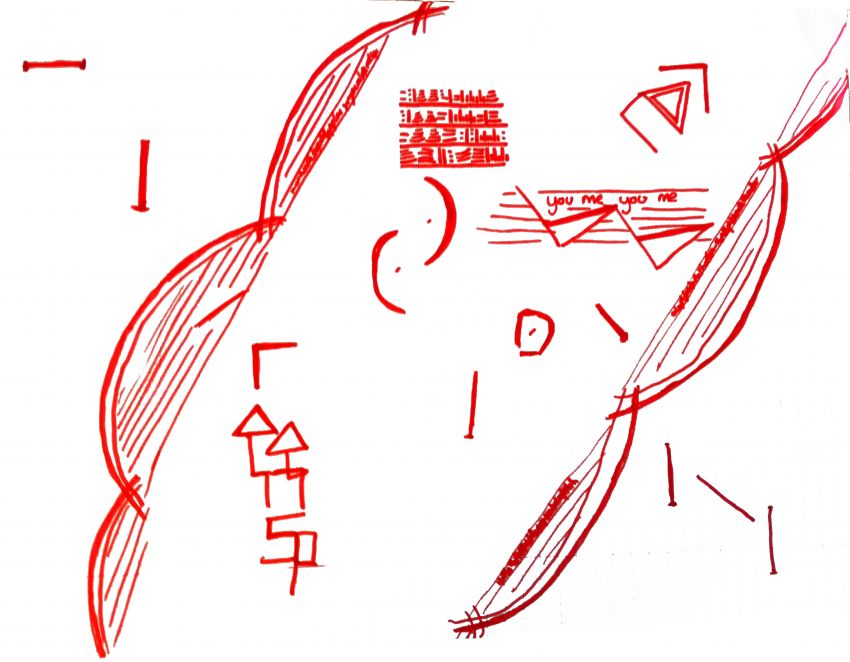 'Torn' - a graphic score/poem I created inspired by whalesong.

My plan for my sound piece [whalesong] is to create a performance system which tracks my interaction with various sound objects and human interface devices, using the information to both directly trigger and change sounds as well as affecting the parameters for future interaction. Each moment of [whalesong] is connected to the overall song session, just like the natural whalesong that inspired it. To do this, I'm using the visual programming environment Max/MSP to make the data talk to each other. The ultimate goal is to get the system to learn how I like to interact, and to let it choose whether to make my life easier or harder (I haven't worked out yet which I prefer) each time [whalesong] is performed. In this way, each hour-long show of [whalesong] is equivalent to one of Hella McVay's 'songs', with the overall project being the 'song session'. The 'units' are made up of what I'm vaguely calling 'action-choreographies', meaning small elements of text, gesture, song, utterance etc. which create mini-narratives simply by being one after another. Honestly, this piece should be about twelve hours long, so I could actually get the repetitions in, but like, that's not going to happen. Nobody wants that. So instead, the 'phrases' and 'themes' are chosen by the learning performance system, the order decided on between me and it during performance, based on data and feelings, to carve whatever sort of narrative we want to make.

That's quite enough for now.

Next up will probably be some experiments with motion capture and gestural control.

More info on the shows: xvwhalesong.com.

And if you are based in or near London, come and see the shows in a few weeks: