Gill Is the Business Development Advisor for Watershed and the South West Creative Technology Network.

A few years ago we stopped thinking that we needed to pay for things. Not everything of course. Rent, power and clothes were all considered necessary. But specifically for music, films, and for some of us, software we learned where we could get digital products and services for free.

Back then we were attracted to digital services where the entry level, or first few months were free. We bought phones that cost a fraction of their retail price. When we bought clothes we became haggling bargain hunters and felt like winners when we got what we wanted for less. We used Pirate Bay for movies or games, file sharing for films and other content because suddenly it was so cool, and we stuck it to the man — and justified it as an acceptable rebellious act. We were so familiar with what appeared to be huge music corporations charging us a lot of money, big software providers charging us through the nose to purchase a license, or of software updates released with bugs, or being expected to pay eye-watering amounts to buy films rather than be able to rent them online. Especially for those who could not afford it, the idea of ‘free’ offered access to new content, and for everyone else we all felt righteous. Over time we just got out of the habit of paying for these things as there became a point where we could get anything we wanted if we could track it down. 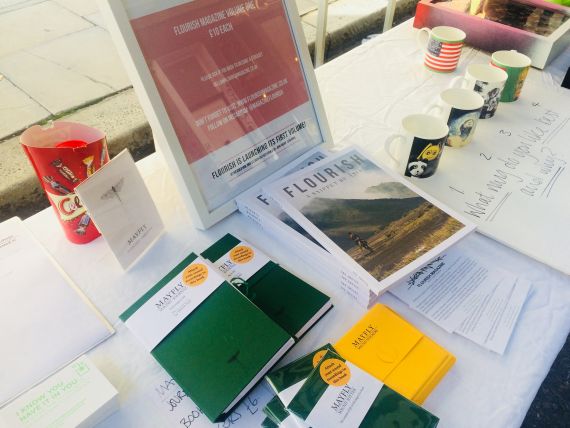 Creative people are making magazines, booklets, all forms of new products and services. The biggest challenge they have is how to get people to pay for them. Photo by Gill Wildman.

Of course it didn’t take long for the man to learn how to get around this and the actual cost — which was well-hidden then — is now very visible. Whether we knew it or not, there was always some transaction going on. For example, cheaper phones and software have been revealed to have been collecting our data, a secondary form of payment is our privacy. Even now we are so attached to the ‘free’ social media, locked into WhatsApp, Twitter (if you are still using it) or Insta, to the point that we don’t know how we could replace them. Despite the many concerns about Facebook we still haven't found a replacement. These businesses have thrived by selling our data, and in spite of what we know now, we are very much still using them.

So when it comes to music, film and digital immersive experiences, we’re not really sticking it to the man any longer, as the man learned how to extract value from us that is even more precious than money. Now sadly it is the makers, producers and musicians who are suffering. Those who have been the creative producers behind the work, have no support structures, as in direct payments, or profits they can dip into as they find their work currently cancelled. Some, for months into the future.

Even successful artists understand this challenge, now amplified by the effects of Covid 19: Joannie Lemercier: "Making artworks in the emerging field of new media arts is incredibly exciting. Yet, building an economic model around this practice is very challenging.” he goes on to point to the ongoing problem: "The economic model may be tricky, but it's not the real problem. The main issue is to find a SUSTAINABLE model, that doesn't consume resources and ideas for "single use" projects."

Finding the right business model for creative work is another challenge.

Right now creative producers and the creative economy as a whole need all of us to dip our hands into our pockets and pay them for what they do. After all, we get paid for what we do, so why shouldn’t they? Many creatives are having to rethink their businesses, and are actively repackaging their work for digital in order to reach audiences in new ways. But for this to work they need us to change our habit of expecting to enjoy their work for free and be willing to pay for what we stream/download/rent. They might also need some new platforms to allow them to take money safely and without being over-charged. In the longer term this income will allow artists and creatives to sustain a living during this period and most importantly, to be here in the future, making meaningful work that more than just entertains but contributes to our culture and helps us makes sense of the world around us.

The idea that free is okay will be hard to change. Even Elon Musk (who is not short of money) found it easy to take another designer’s work for free when he ‘used’ a unicorn mug design, telling the designer that he was giving him exposure in return.

But as we all know, when you’re out in the elements, exposure can also kill you.