Verity is a Senior Lecturer in Virtual and Extended Realities at UWE Bristol.

"Virtual reality is a technology that could actually allow you to connect on a real human level, soul-to-soul, regardless of where you are in the world."

Virtual Reality is not a new technology. When I was small, a stereoscopic viewer called a bioscope, owned by my Great Grandfather Melville Alexander in the 1890s sat on the shelf above our telly. He was a photographer in Kinross, and would take photos of nearby castles, lochs, and personalities with a camera that had two lenses, mounted 4 inches apart to take a 'right eye' and 'left eye' image. When printed out and stuck side by side on a piece of card, you could place the image in the wooden, handheld bioscope and the nose piece would prevent your eyes from converging naturally, giving the impression that the photographs were 3D. I remember a particular romantic, sepia tinted image of two women in flowing white Victorian dresses helping one another across a stream. Having just checked with my dad, I now know them to be my Great Great Uncle George's wife Jo, and her sister (who was also latterly married to George!) Christina. I would stare at these photos for hours, amazed by the way that they magically jumped into 3D for me. I tried to peer behind the women into the woodland, and wondered why the flat pictures in our own family albums didn't do the same. 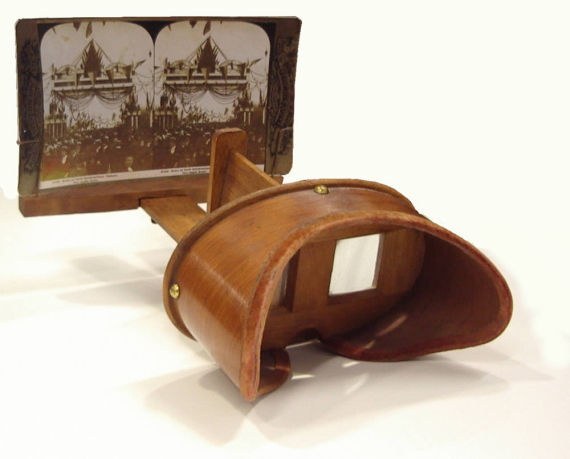 The technology gradually evolved and virtual reality headsets in one form or another have been cropping up since the 60s. There was a real push in the 90s, with Nintendo's 'Virtual Boy' leading the charge. However, despite various angsty sci-fi films suggesting that these reality usurping machines will take over our minds and bodies (see The Lawnmower Man, 1992) they never really hit the mainstream. This may have been because they were too cumbersome and expensive, or because there was not enough content to sustain enthusiasm. It may be because they were seen as 'a bit teenage boy-ish' or due to their well earned reputation for making you feel sick. Fingers somewhat burnt, the big tech companies left VR on the shelf for a decade or two, gathering virtual dust.

So what has changed with this new generation of headsets and controllers? Why should we believe the latest claims that this really does change everything? In brief, developments in mobile phone tech have meant that the processors, sensors and screens have become small enough, cheap enough, and plentiful enough to allow headsets to render complete virtual worlds. Unlike the static 3D representations of Melville's old bioscope, or the animated 3D worlds of the Virtual Boy, these new headsets allow you to traverse fully realised virtual realities.

As investment follows enthusiasm, and new hardware is being released all the the time, Virtual Reality and its similarly immersive cousins Augmented and Mixed/Merged Reality, are emerging as potent and promising new playmates for artists willing to embrace a new medium.

It is a great time to be experimenting. A rare opportunity to be a part of something that has yet to establish an establishment, and to design experiences that may delight, disturb, inspire or enrage. The exhibition and distribution models are not quite there yet, and reaching wide audiences can be tricky, but at this early stage, there are few universally accepted rules when it comes to making creative work in VR. Those that decide to take the risk, are those that will shape and disrupt how things are done in the years ahead.

If you are a creative practitioner interested in making artistic content in VR, it can be difficult to know where to start. In this short series, I will attempt to share what we have been learning here in the Studio about VR; what it’s all about, the technology here now and coming soon. It will offer a sampling of the inspiring works being made around the world, and a brief intro to the tools you will need to start experimenting.

MekaMon from Studio Residents Reach Robotics will soon be in the shops. We look back on their journey so far and invite you to come and play to shape the future of gaming...

Bringing Back the Factory

What if the Replicator from Star Trek really existed? What if, at the touch of a button, you could have whatever object you desire? Digital fabrication technologies like 3D printing and laser cutting can't do that, but they…