His research has raised many questions: Can I build synthetic organisms that evoke an emotional response in encounters with an audience in public space? Can I encourage people to think of nature as contingent with, rather than separate from, our human experience as living creatures? Can I meaningfully draw attention to the fragility of the systems which support life?

Robbie's research process has also led him to reconsider the materials he works with and explore ways to minimise the waste and environmental impact of making this type of work. As such, he's been looking at ways to incorporate various organic and recycled materials into the fabric of his sculptures, the majority of which would be biodegradable after its useful lifespan.

Robbie began with an experiment growing mushroom mycelium to use for the solid, skeletal parts in his sculptures and also a type of bacterial cellulose to use in making skins and sacks. It takes time to grow these materials but Robbie is interested to play with them and get an understanding of their properties – how strong are they? How flexible? Can they be drilled? Do they hold the shape of a mould?

Here at the Studio we are very excited about the potential of Robbie's work, so we wanted to share his latest project blog post, a short piece that documents his latest forays into the world of biological materials ...

I've been researching biological materials to use for making sculpture and robot parts, the idea is to use these organic materials in the construction of synthetic interactive organisms which will be installed in public places.

So far my experiments have been with Kombucha SCOBY leather and Oyster Mushroom mycelium, I want to use the leather to create bags, sacks and skins and the dried mycelium will be used for structural parts and bones of the robots.

The results have admittedly been a bit hit and miss so far... there's definitely room for refinement in the process so will hopefully get more consistent results for round 2. 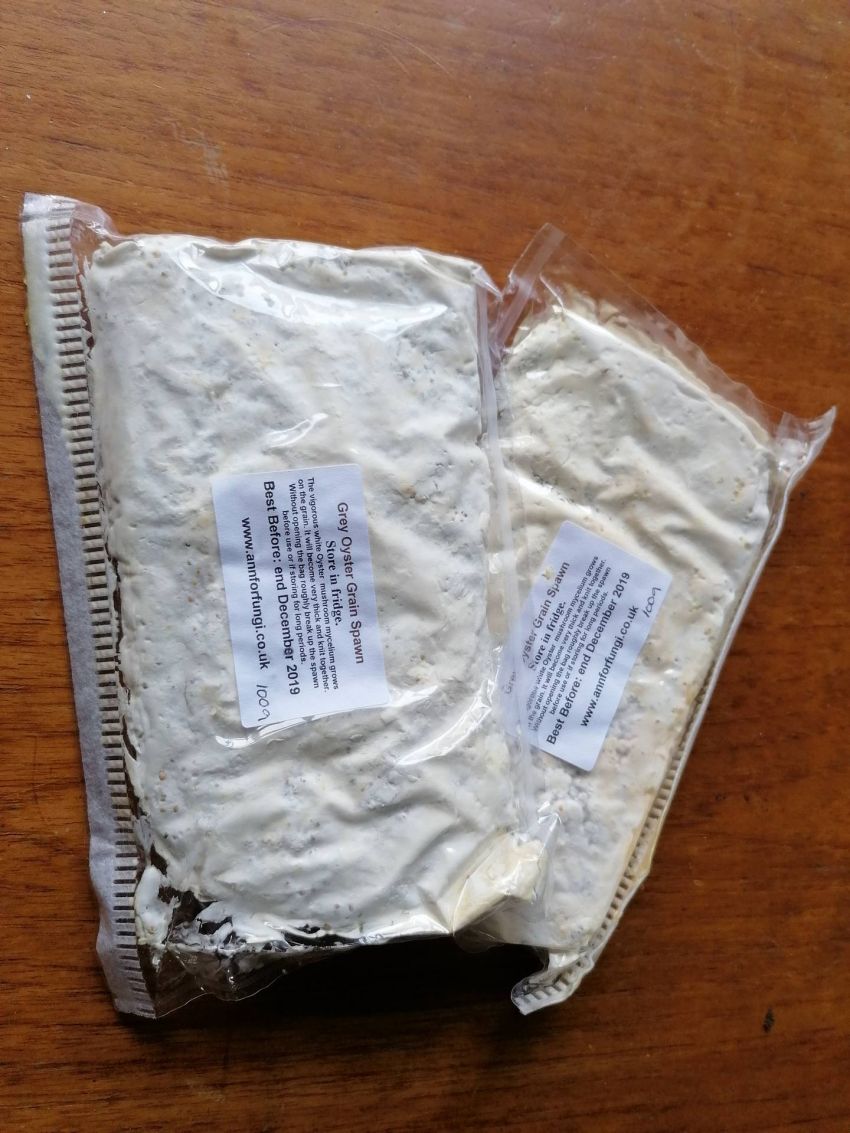 Grey Oyster Mushroom Grain Spawn (kindly given to my by Andrew Adamatzky at the Unconventional Computing Laboratory, UWE - https://uncomp.uwe.ac.uk/ ) 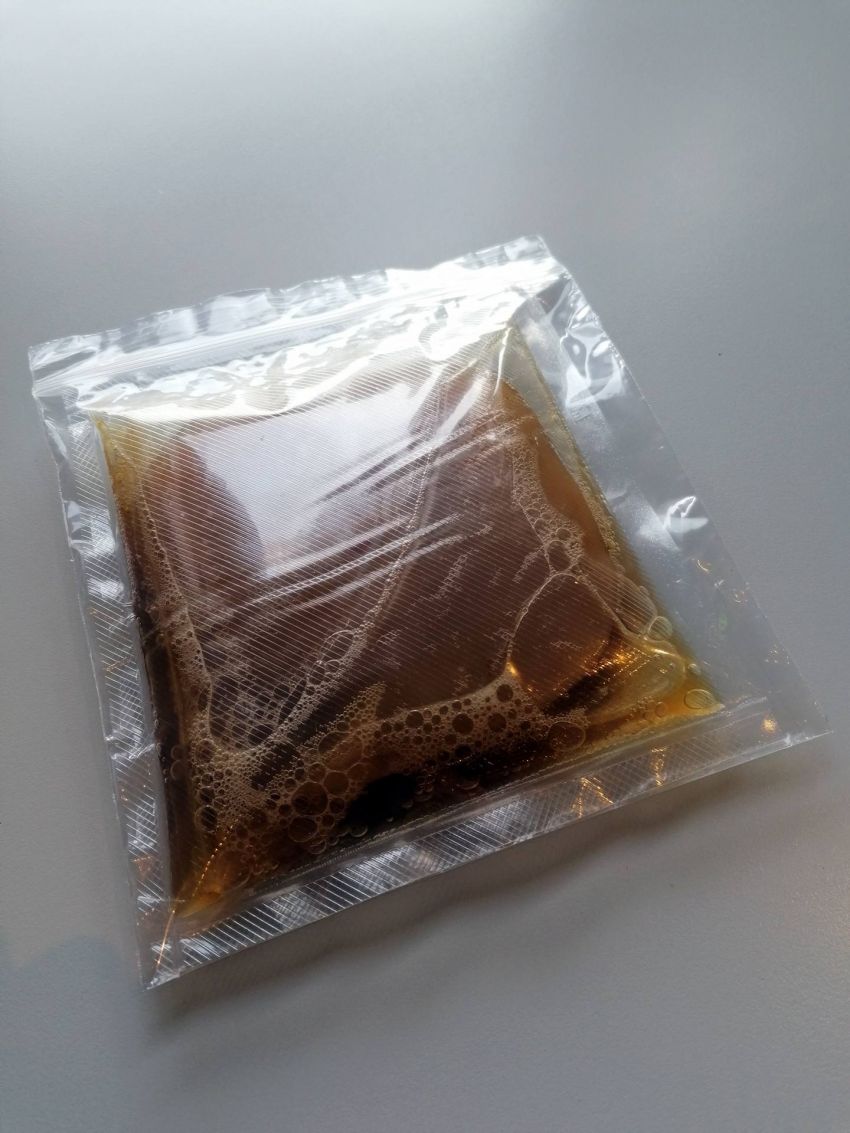 A Kombucha SCOBY (symbiotic culture of bacteria and yeast) 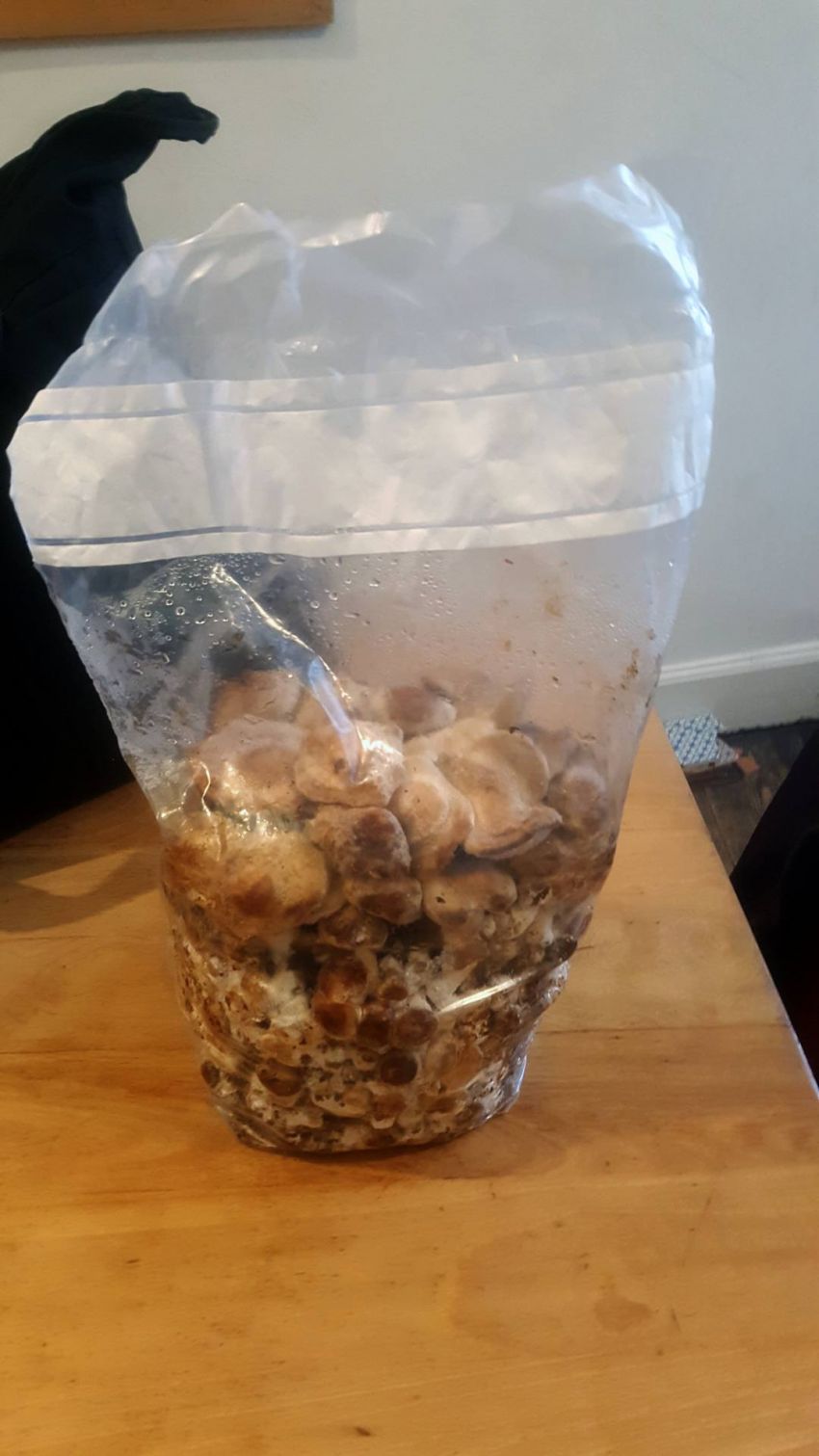 A bag of Shiitake Mushrooms that were already fruiting which was given to me by my pal Dav. 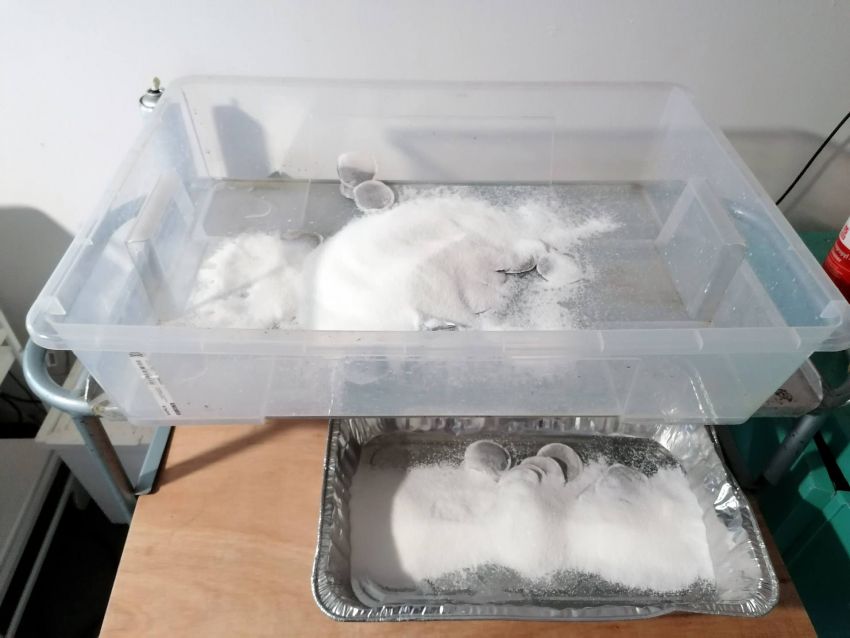 Preparing the sweet tea which the SCOBYs will colonise. 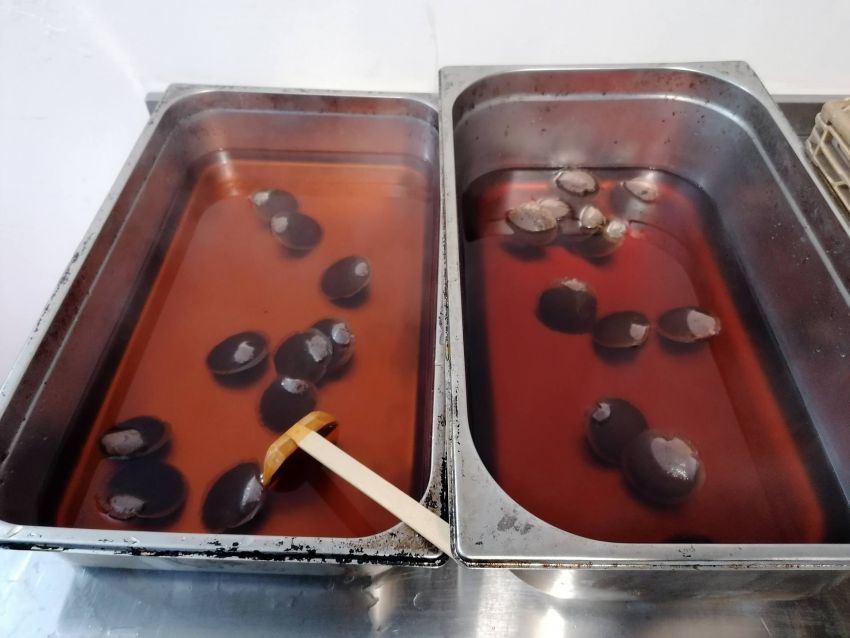 The SCOBYs will feast on the caffeine and sugar content of the tea, these trays were sterilized and covered to (hopefully) stop contamination. 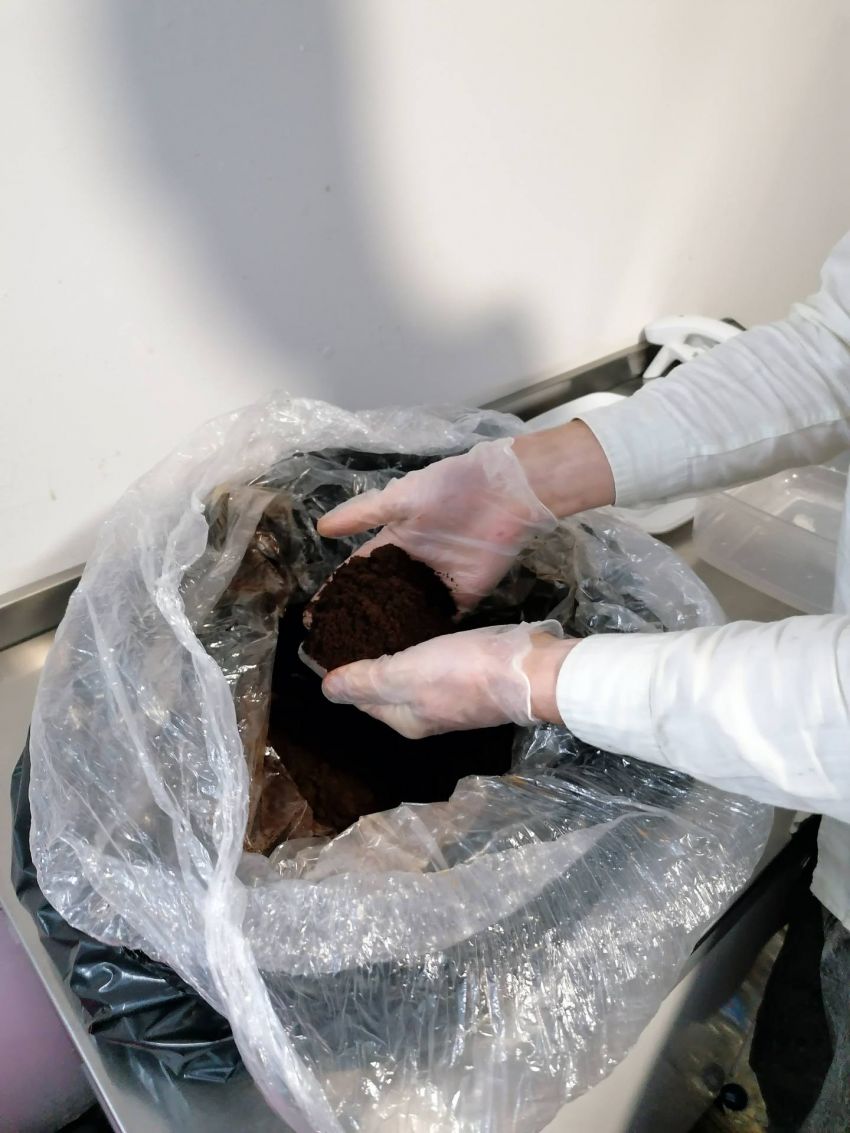 I decided to use coffee grounds as a substrate for the mycelium, these had been collected from a coffee shop the same day - the idea is that they are already pasturised by the espresso machine. They could also be easily shaped and moulded.

At the same time, another batch was prepared using pasturised Rye Grain as the substrate. 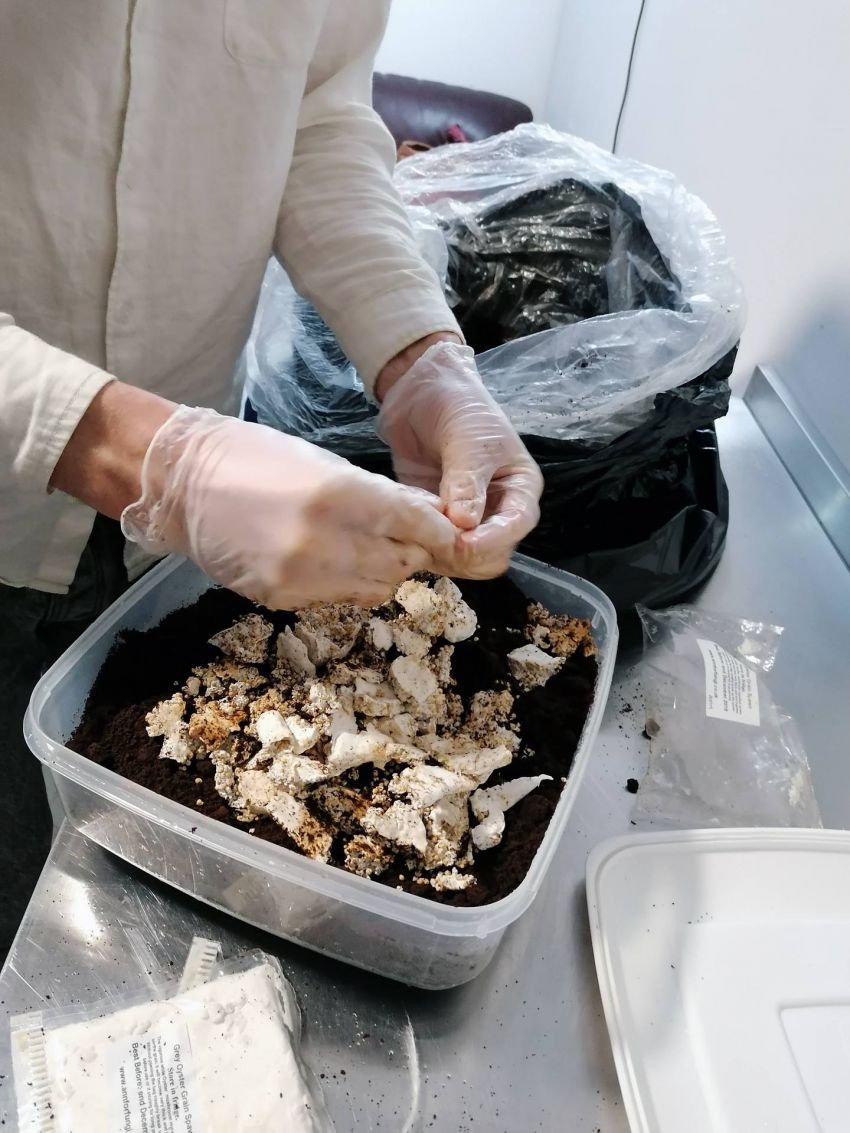 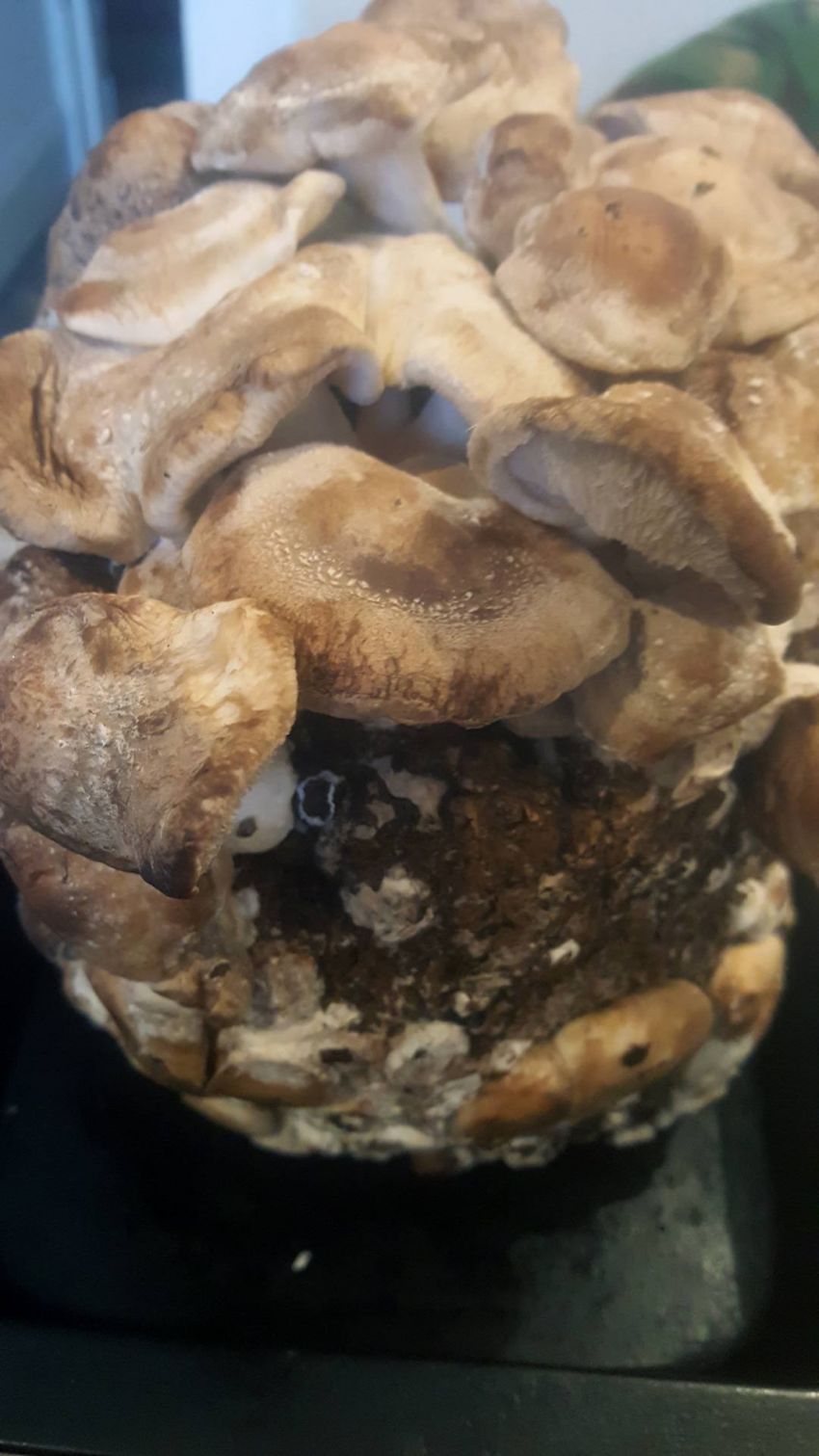 Shiitake had a couple of big flushes.

It was all going so well,

....and then came the dreaded mould 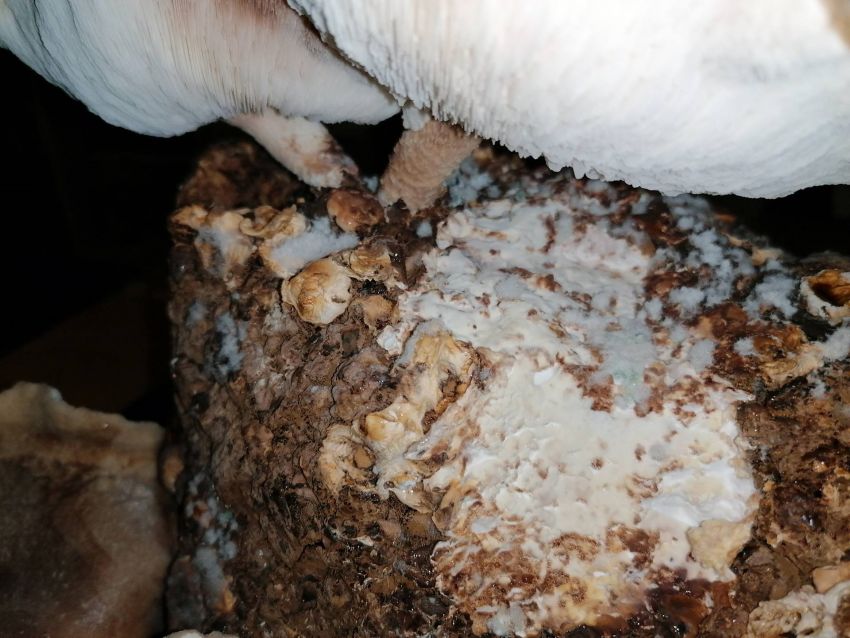 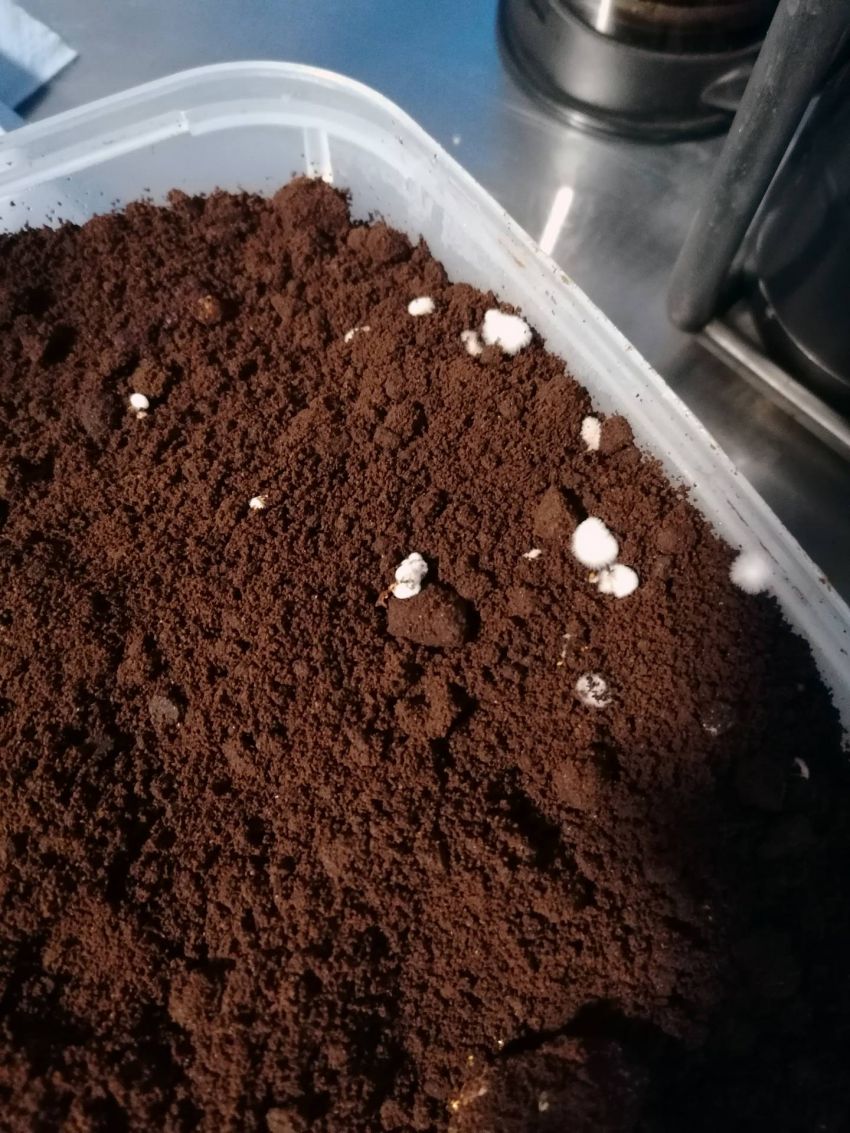 Maybe myceliuym, maybe something more sinister, the coffee was slow to colonise so I took some aside and experimented with better air exchange. 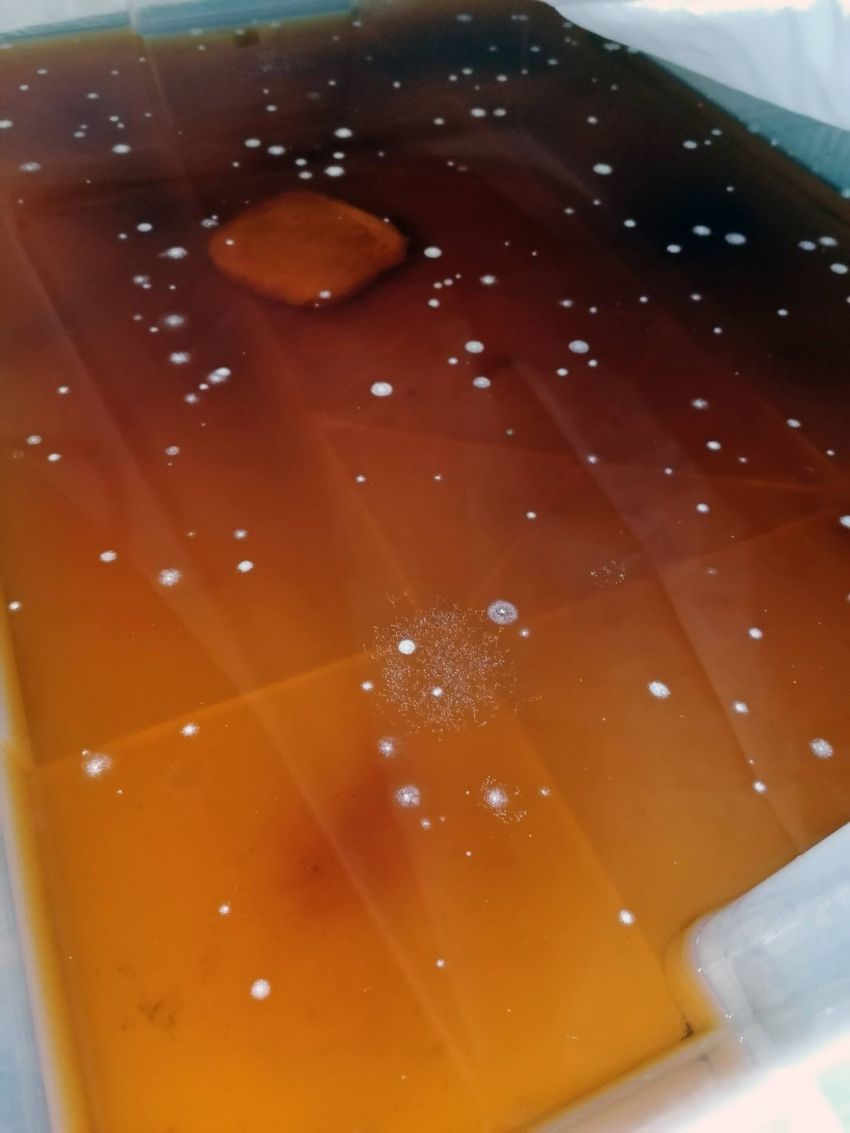 Kombucha started to get some nasty blotches (at least it's not for drinking). 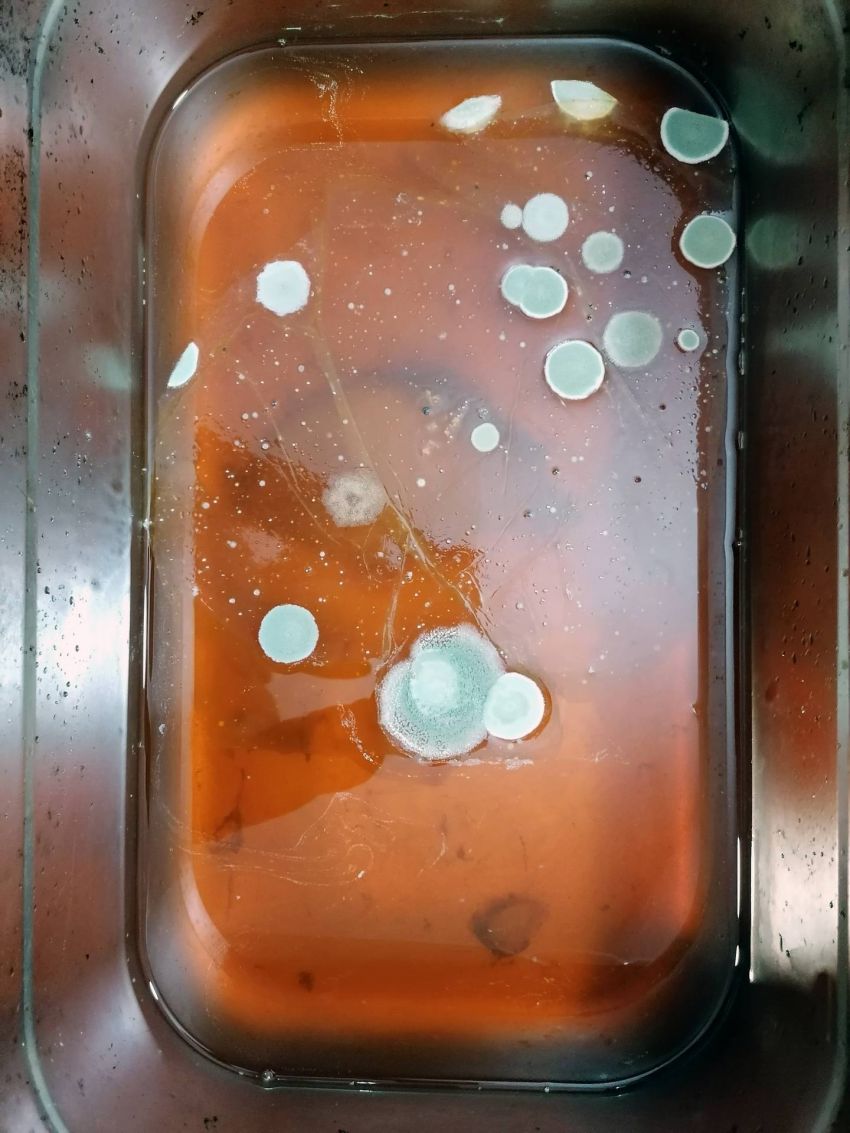 The SCOBY was slower to form in the metal trays - these 'mothers' were from another source so I'm unsure if it was just the potency of the colony or if the environment was a factor. Lots of nasty mould here. 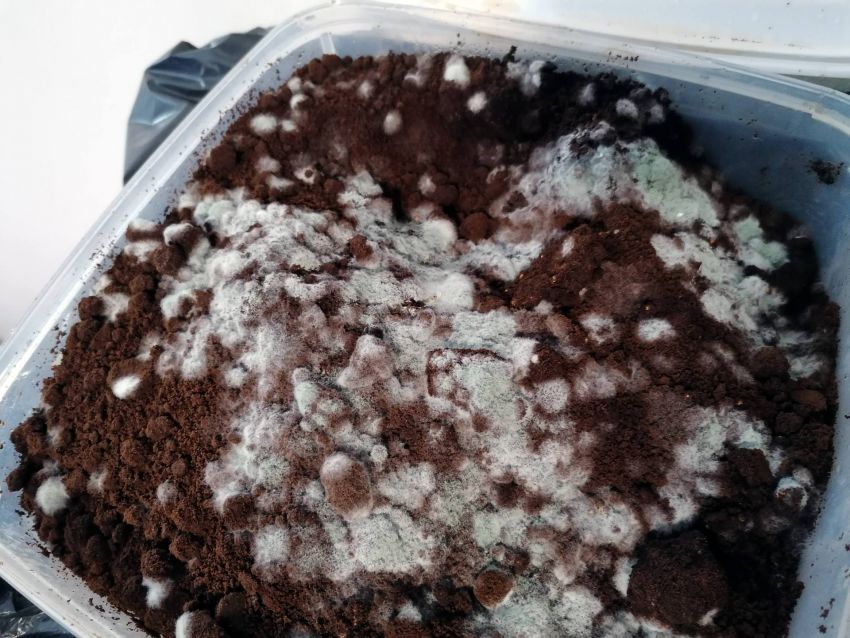 There were some good outcomes though: 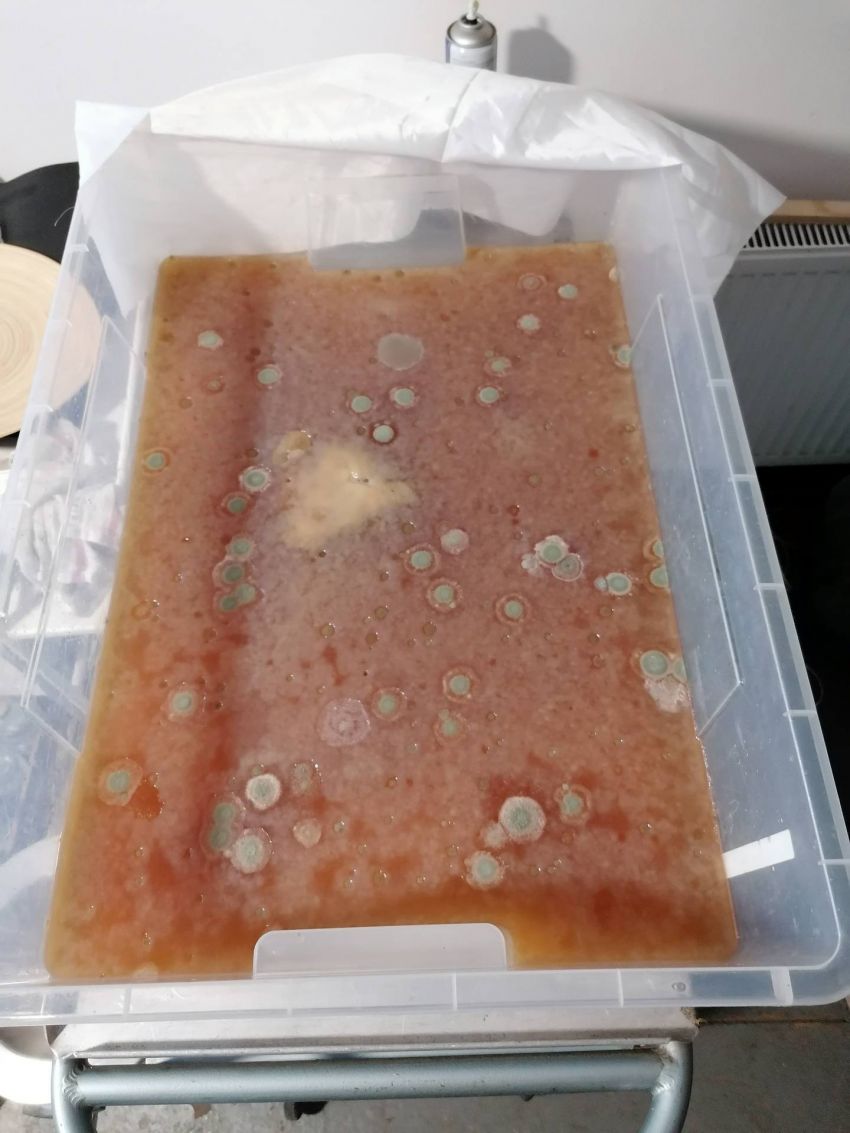 Final growth stage of the big SCOBY before I harvested it... actually grew to a decent thickness, there are clearly mould patches on top but also has discolouration attributed to trapped yeast deposits. The temperature is definitely a big factor here, the room that I was using has a fluctuating ambient temperature of 10 to 20 degrees (but usually closer to 10). 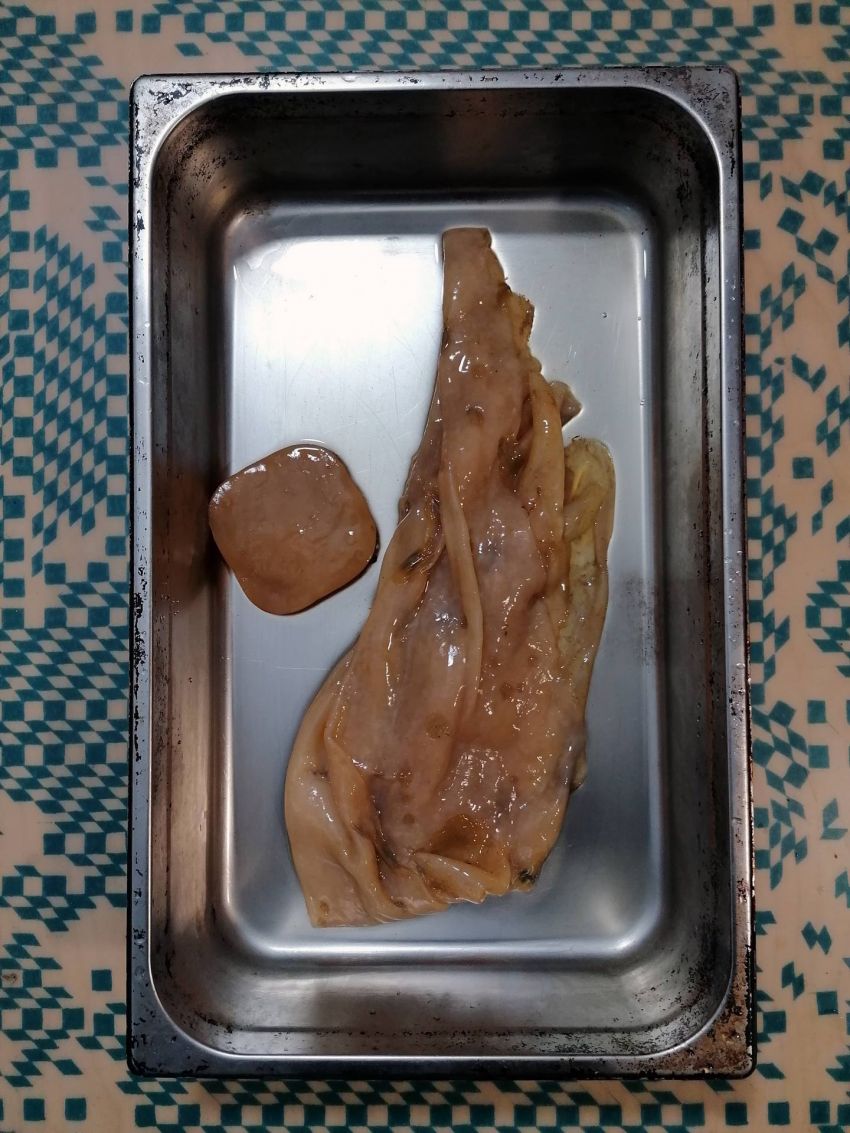 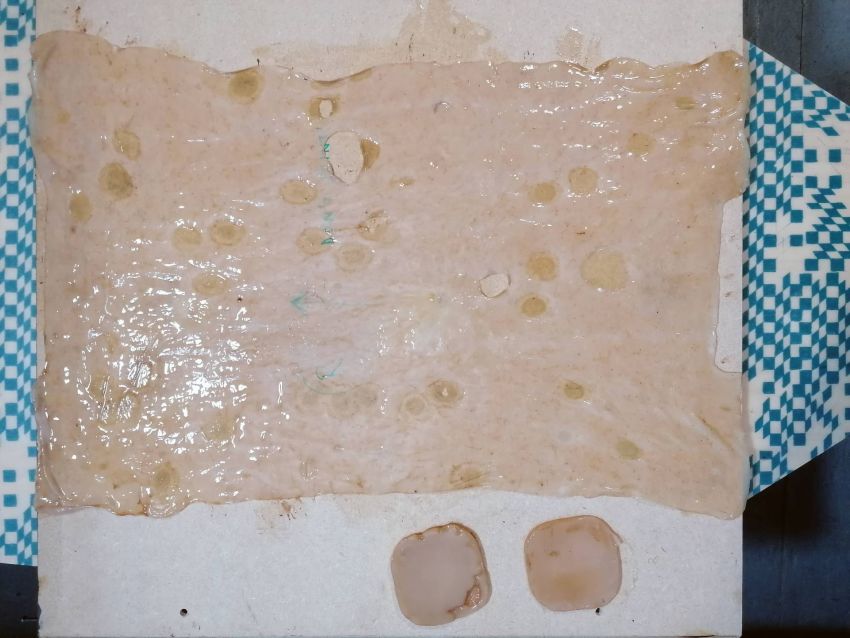 Drying the skin - the mould has left some quite interesting patternation, I'm going to experiment with drying techniques, fusing the skin, waxing and dying. Good air exchange will be critical here I think. The sheet is strong although not of a uniform thickness, if I hadn't been creating such a biohazard then I would perhaps have let this thicken further. 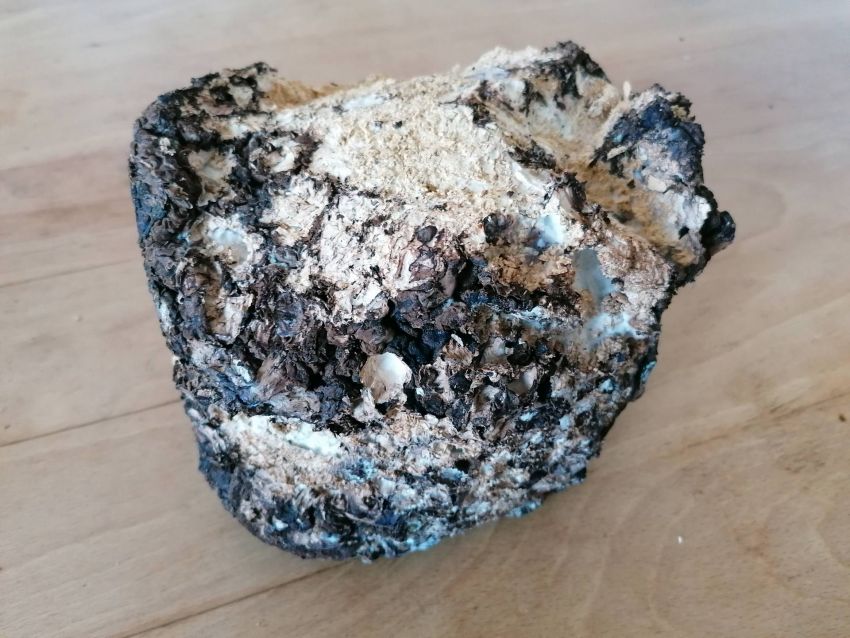 Dried Shiitake 'brick' - has similar consistency to wood though perhaps a bit fragile. I'm going to attempt to cut and carve this sample, looking at ways to dry and harden further. 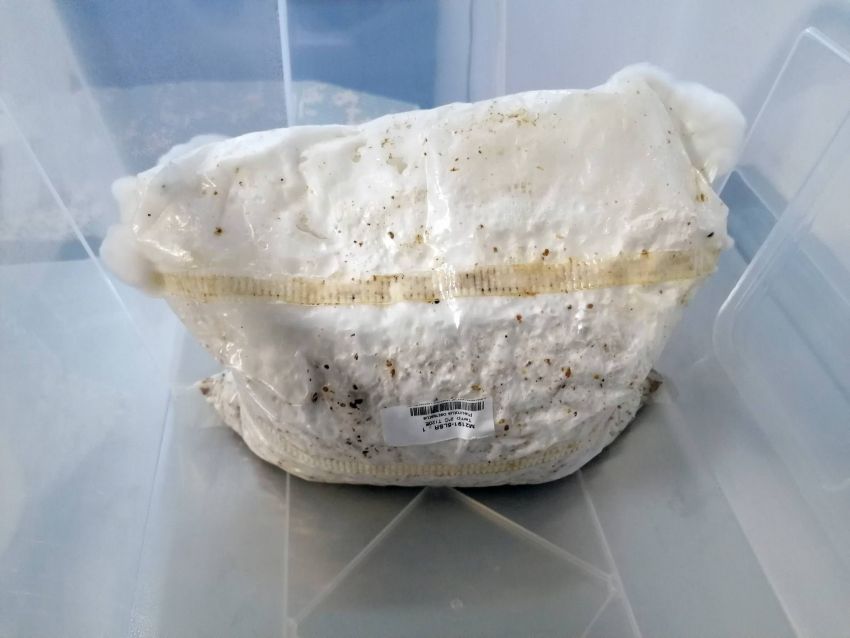 The pasturised Rye Grain worked very well and has a really strong mycelium growing. The vacuum bag was also pasturised within the pressure cooker which has kept things sterile but also allowed good air exchange, will look at using this method for the next batch.

Robbie's experiments are continuing at home during lockdown ... we will keep you posted!