The End is Near.

Vytas is an artist and designer, interested in physical, social and digital identities. Both, individual and communal. His explored themes encompass borders, national pride and identity, digital relationships and beyond.

"Somestic Media" is a series of conventional domestic IoT appliances, embodying the impact social media has on the perception of time, distance and normality.

To recap the scope of our project for those who might be hearing of it for the first time, Somestic Media takes a form of three domestic home appliances. That is, an alarm clock, a radio, and a television set. Each device extracts a specific function from a social media network. You can read more about the project's background here.

Around the time we published our first blog post, the milestones were clear:  Three smoke and mirrors prototypes that would perform well enough to convey the purpose of the project. Then suddenly David Haylock from the Pervasive Media Studio stepped in with heavy coding skills, lots of time to waste, limitless energy and mojo, making us sweat to keep up. And so good news: We are already beyond our milestones! Followed by worrying news: There is so much left to do! - Added complexity means that it becomes harder to make things presentable as a work in progress deal. Various technical nuances are stepping in the way, and sleep deprivation has kicked in forcing us to glue bits that were never supposed to be glued together. We are keeping it positive, real, and we obviously hope for the best. The coming weekend will be a nightmare, so wish us luck. Wish us peace. Bless yourselves.

The Work-In-Progress discussion we had with various people working at the Pervasive Media Studio turned out extremely helpful. Everything seemed almost too good to be true, as if our coordinator Victoria Tillotson had forced the right people to join the right groups. Whether true or not, it turned out alright for us; We find such oppression reasonable and beneficial to the cause. We received encouragements, and made ethnographic comparisons between our old-school-inspired devices and modern screen-based/voice-assistant technologies. We were urged to write more, which evokes a modest sense of embarrassment, as this rushed joke of a blogpost is trying to come together. Anyhow, the cherry on top of the cake was some healthy hating on galleries and museums, followed by cheerful swearing. Modern bohema, just the way we like it.

A Long Way Ahead. 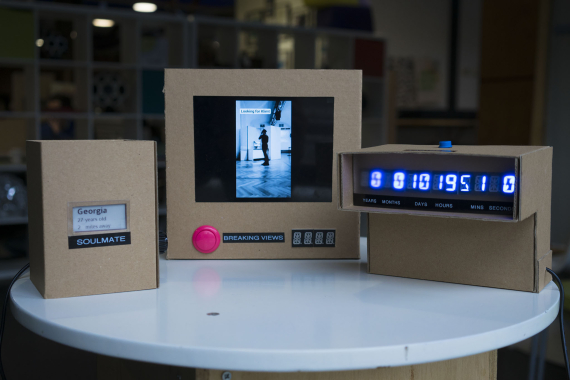 The devices are looking great, at least on screen. Jon’s designs have advanced dramatically since the first renders, as the actual technology and conceptual twists fed into the process. We want to keep the latest designs a surprise for now. Let’s just say big improvements are meant to come, and we’re quite excited to see various pieces coming together! As a treat (for those who like it open and despise blackboxing), the next blog post will cover technical backend as well as physical design decisions for each of the objects, alongside some sketches and geeky links.

We are approaching the end of a great residency, and we can’t help but think of the project’s future. Our conceptual framework looks something like this: 1) Devices are probes meant to ask questions around the use of specific social media functions and how these algorithms transform our social behaviours. 2) We want to democratise our project by making the devices accessible to anyone interested, and finally 3) we want to further extend the project’s scope to discuss, prototype and deploy alternatives for current social media frameworks, through academia, and beyond.

To address these goals we are looking for partners, that would help create a communications strategy to get the project out there. We are also looking into funding to finalise the prototypes, make them sturdier and easier to set up. Another goal is to develop an online platform, that would allow people to sign up for the devices to be deployed at their homes. The website would also allow people to share their experiences with the objects. Last but not least, we want You, the Living, to participate in our endeavour. Feel free to get in touch if you would like to host the devices in your home. That is, once they are ready.

It has been a long time since we have been so thrilled! - Can’t wait to see your faces at the final show. It’s gonna be badass.

The kickoff week allowed us to extract the essence of our project. It made us return to the roots of when Somestic Media had first been conceived, to remember that our idea was inspired by powerful personal stories.