2018 has been a busy time in the studio. We said goodbye to Verity McIntosh and Sookie Greene and hello to Will, Hannah and Natasha. We welcomed two babies and lots of new Residents. Here are our highlights.

Watershed and the Smart Internet Lab at the University of Bristol explored the potential of 5G through a series of experimental events - asking artists, researchers and creatives to produce bold new works in public space.

On Valentines Day the Pervasive Media Studio turned 10 years old. We wanted to celebrate by looking forward rather than backward, outward rather than inward and by foregrounding the work of the community of extraordinary people that make the Studio our home.

So we threw open our, sometimes hidden, doors to a public audience and invited the residents to share a birthday gift with them. I can’t remember the number of people that turned up (but I know that it was LOADS) or the overwhelming range of things that they played with, ate, watched and shared… but what does stay with me is the spirit of generosity, openness and welcome and how it shone very bright in a tough 2018. 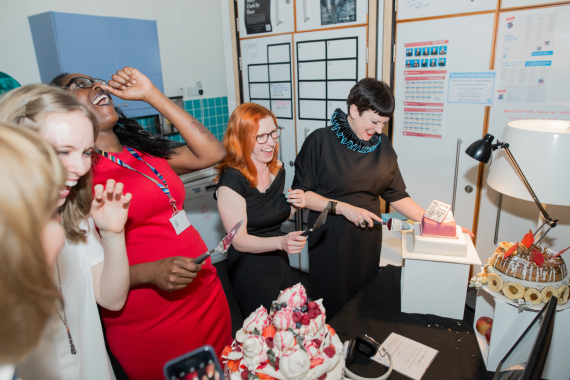 My favourite moment was the Sunday morning of Layered Realities. We nearly had to stop the show due to snow and ice. The whole organisation came together to help out and to make it happen through being in tune with each other, and it worked. It highlighted the collaborative values we all try to make integral to our work. 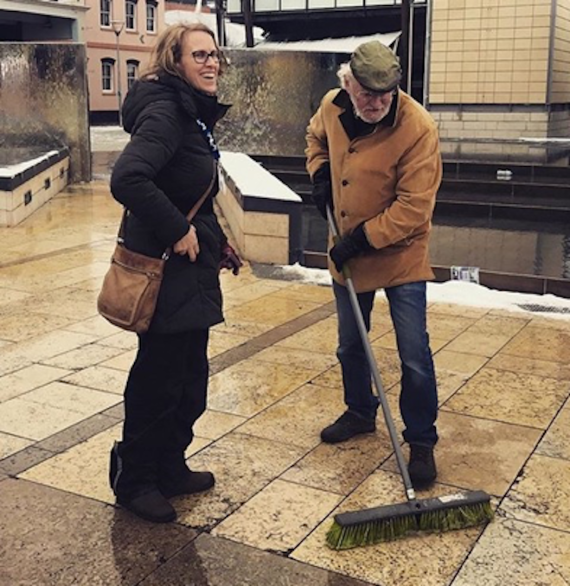 Earlier this year Playable City took artists to Tokyo for a residency that explored technology, inclusivity and play in public space. Sophie, one of the artists, created a very simple version of Japanese hopscotch, Ken Ken Pa outside the gorgeous Chiyoda Arts Centre. I remember sitting in the lovely garden and witnessing complete strangers engage in meaningful conversations about design, play and culture and the differences between the UK and Japan. I was again reminded that the simple act of creating a space for people to play in public can genuinely led to really great connections. 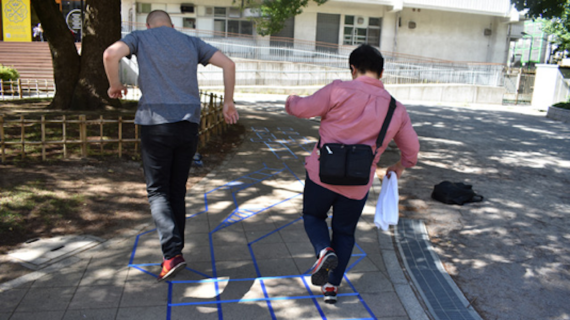 In July this year, a few of us followed a compass that led us to the spot where the Bristol New Cut meets the Avon River. Here we used our phones to tune into one of Oh Europa’s Beacons, 1 of 37 places in Europe where you can listen to love songs sung acapella, by people from across the continent.

This is a project by Pervasive Media Studio residents Action Hero. Over 6 months in 2018, they travelled over 30,000km across Europe in a motorhome, recording songs of love, hope, heartbreak, loss and desire, sung by the people they met. This ever-evolving archive is now broadcasting 24/7 from beacons placed, by them, at literal edges of the continent, but also the invisible boundaries, margins, cultural junctures and geological edgelands of Europe.

That baking hot day in July has stuck with me. It was magical. A moment to step outside of current (draining) political discourse, hear passionate voices from the corners of the continent and really connect with all the human things that we have in common.

I am so very proud that Watershed supports this project. You can find out more, download the App (containing the compass) and see the locations of beacons currently transmitting love songs at oheuropa.com 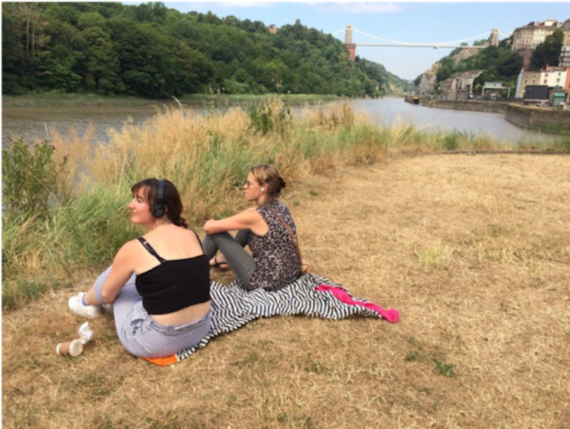 The moment that Jo Lansdowne told me the rock splitting was happening in Watershed bin store - all sorts of thoughts went through my head...

The Rock splitting was a bonkers moment where one of SWCTN Immersion Fellows decided to record the sound that the rock make when it is split. This took place during the SWCTN workshop two sharing sessions. 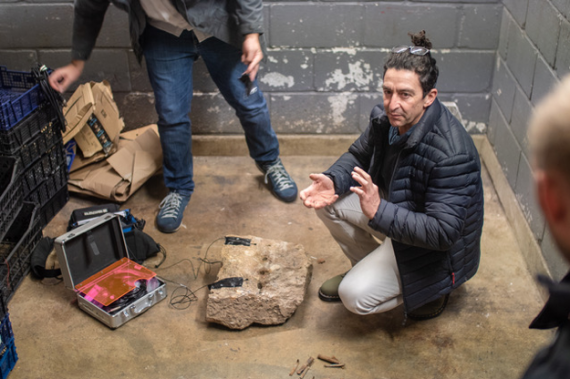 This year I got to be more involved with the residencies the studio run. David and Victoria who lead on residencies and their considered, inquisitive and thoughtful approach to working with Artists have taught me so much. Highlights include working with our 3 new Winter Residents and helping them to shape their time in the studio and seeing Jonny Cotsen's show, Louder is not always Clearer in Newport. We got so lost on the way home, we drove past this bridge about six times (But that's a secret). 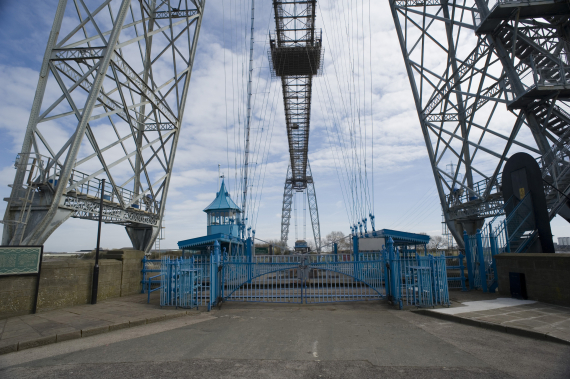 I've had so many brilliant moments since I joined the team in the summer, but my favourite was probably the second SWCTN workshop that we held in Bristol Old Vic's beautiful new spaces. There was an atmosphere of friends gathering together, all eager to share their news and fascinating thoughts, and a good few occasions where all 40ish voices in the room were laughing together. Great stuff! 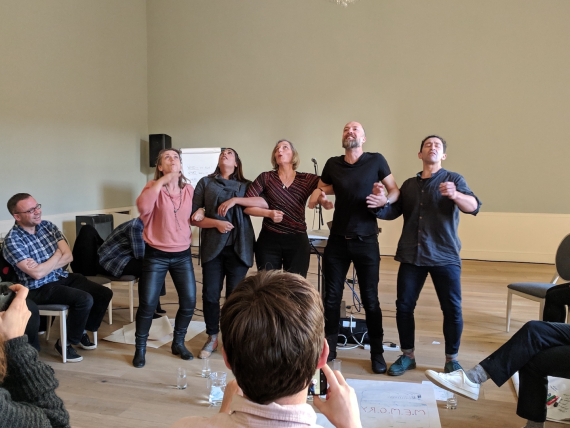 David Haylock, Watershed's Creative Technologist -There are so many! So rather than picking one here's three:
1./ Working on Action Hero’s OhEuropa project, specifically getting the iOS application onto the App Store (albeit two hours late) and seeing the approval email.

3./ Starting my BSL Level 2 qualification and using BSL in the workplace.

In a year packed full of incredible things, my favourite moment of 2018 has to be the Creative Producers International Lab in Tokyo, which took place in the autumn.

The Creative Producers cohort, along with the majority of the Advisory Group, travelled to Tokyo to take part in a four-day lab followed by a Making the City Playable Conference.

It was a fascinating experience and an exciting context in which to continue our learning together. We invited a mixture of Japanese and international speakers to share their experience of creating cultural work both in Tokyo and across different international contexts. Coming together again a year after our last event, it was amazing to see that the bond we have cultivated among the cohort was as strong as ever. The city provided a brilliant backdrop for some fascinating explorations within the group.

The passion, enthusiasm, commitment and love that these incredible Producers bring to all we do together never fails to be humbling and I am incredibly proud of all we have achieved together this year. 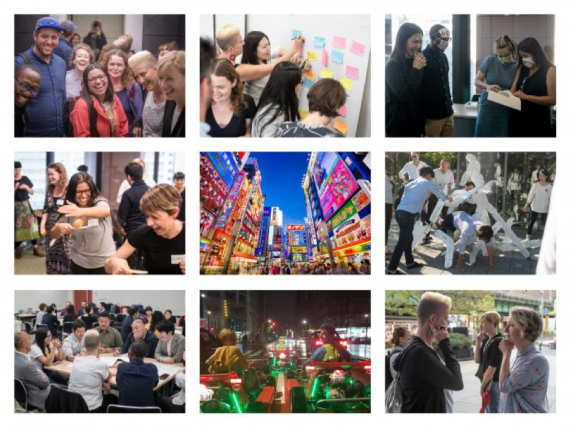 I can’t pick just 1 moment. For me, the highlight is the people that make up the community and the fact that we come together at all times not just for one specific moment. 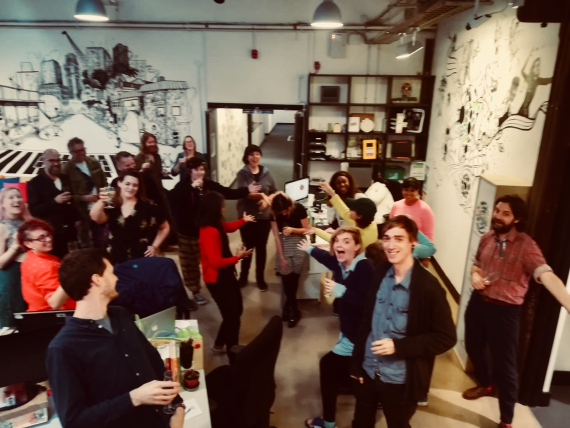 How will 5G networking technology change the lives of citizens in Bristol and beyond, as it rolls out to our mobile phones and millions of other connected devices over the next few years?