How will 5G networking technology change the lives of citizens in Bristol and beyond, as it rolls out to our mobile phones and millions of other connected devices over the next few years?

Tim Kindberg is a writer and digital creative.

Watershed and the Smart Internet Lab at the University of Bristol explored the potential of 5G through a series of experimental events - asking artists, researchers and creatives to produce bold new works in public space.

How will 5G networking technology change the lives of citizens in Bristol and beyond, as it rolls out to our mobile phones and millions of other connected devices over the next few years? Watershed and Bristol University's Smart Internet Lab posed this question through the Layered Realities showcase event, which took place on 17 & 18 March 2018 in Bristol's Millennium Square and at We the Curious. 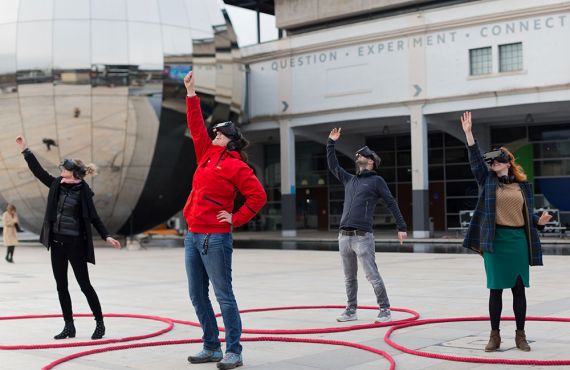 From the Light Of the Fire, Our Dancing Shadows. Photo: Paul Blakemore

In addition to spectacles and experiences that imagined the potential of 5G, we provided for reflection through a programme of talks by 5G Fellows, selected on the basis of their proposals to explore an aspect of 5G that could affect us deeply. On paper, 5G will bring an order of magnitude increase in bandwidth, lower transmission delays, and greater reliability. More devices will be connected, and the quality of the connection will increase. So far so technical. But what will that mean for how we lead our lives?

I opened the Fellowship talks with Experiences for Crowds, an exploration of how artists and developers have been creating digitally mediated experiences for crowds, starting with a large-scale video portal between New York and LA in 1980, and ending with a similar idea using mobile phones between Bristol, Kampala and Kigali in 2017. Unlike 4G, 5G can provide high bandwidth and low latency - in other words, compelling interactivity - even at festivals and other events where people gather densely. After many case studies, I treated the audience to a demo of Nth Screen: coordinating their mobile phones so that they emitted a collective, synchronised audio meditation on climate change.

"I’m looking at my phone all the time, and it’s a singular experience, it’s about me and my device, whereas this work is about your device and how that connects you to other people in a real way, in a live way."

In 5G for Social Good, ginger coons followed with an analysis of the pitfalls for privacy and (in)equality in a world permeated by many interconnected devices. Through the lens of a fictional design agency, ginger explored how 5G will increase the penetration of devices with the potential to track or exclude us in public space, and asked how to enable people to exercise power and choice despite their presence. She offered three design ideas as an exercise in critical thinking, 'Own Drone', 'Build a Burner' and 'Cartograboration', which respectively help with obfuscating our location, extending access to the socio-economically challenged, and building grassroots understandings of our public spaces.

Jake Applebee of Crack Magazine asked how 5G could affect the music sector, both in terms of interaction and business models. In his talk What is the Future of Music as a Cultural Experience, he quoted Bjork about the desirability of bringing a more direct connection between the musician and the listener -  in fantasy worlds as well as the real world. Jake considered how 5G's high bandwidth and low delays will lead to novel applications in augmented reality, virtual reality and holography, where artists can create the ideal environment for listening to their music, shows can be recreated, and live performances can be split between multiple venues and the home.

Stuart Nolan's intriguing question was how 5G will enable us to extend one of our most basic senses: touch. In Reaching out - Touch and 5G, Stuart talked of how 5G-connected devices will be able to measure our behaviours - the information we give off about ourselves, whether consciously or not - in new ways. 5G will enable that information to be transmitted near-instantaneously to others. In short, a new, machine-mediated sense of touch will become possible. Stuart took us through several exercises based on his One Thousand Mind Readers project, firstly to demonstrate how much unconscious information we give off that can be detected through physical touch, and secondly to help us imagine how this could be amplified digitally. 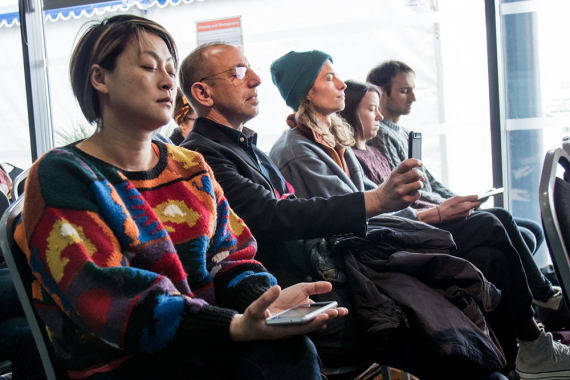 Last but not least, Dimitra Simeonidou, director of Bristol University's Smart Internet Lab, wrapped up with an outline of how her lab is researching the technologies that underlie 5G. Her lab set up the 5G testbed in Millennium Square with a multitude of partners, on which Layered Realities was based. While the showcase demonstrated 5G's potential, the technology itself is still under development and will not be rolled out for about two years. In the meantime, The West of England Combined Authority will install the 5G mobile technology at the Roman Baths in Bath, MShed museum and the We The Curious Science Centre, both in Bristol. The project will build upon the 5G network already developed by the University of Bristol, to establish experimentation capabilities for digital innovation.

"So much to consider, particularly in a world where outcomes are guided via technology, and the spaces for critical thought seem closed down. Really good contributions of positive and negative aspects of 5G. I've learnt a lot."

All technologies deserve a critical eye, whatever their potential. Our 5G Fellows provided that, and will ensure that reflection and debate continue. As one audience member put it, it is important to become engaged not only with the details of the new technology itself, but with its effect on "what being human might become."

2018 has been a busy time in the studio. We said goodbye to Verity McIntosh and Sookie Greene and hello to Will, Hannah and Natasha. We welcomed two babies and lots of new Residents. Here are our highlights.