A wee reflection and update on Meal Plans, a project which culminated in an exhibition of new works entitled The CleanMeat Revolution.

David is a sculptor who makes work that investigates our relationships with technology and the future. He particularly enjoys cooking, eating and talking about food and so culinary themes often pop up in his artwork.

Meal Plans is a research-led art project that imagines the future of food as if it were history.

I took down and packed The CleanMeat Revolution almost four months ago to the day. Something that was five months in the making was wrapped up in about 6 hours, and it strikes me once again how unnervingly quick the deinstall process can be. I see this pretty regularly with my art handler/technician hat on – a show that took three weeks to install can be in crates and on the back of a lorry within a couple of days. 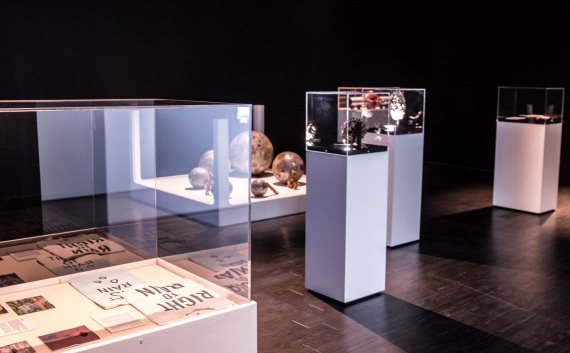 The CleanMeat Revolution exhibition at We The Curious by Shamphat Photography

I think my brain works to a similar timescale, specifically with art projects. It goes a little something like this: ideas occupy my mind and conversations for a few months, become slowly more solid over time, consume more mental space as deadlines loom, necessitate a frenetic burst towards the end, and then celebration!  Usually followed by exhaustion, a need for distance and ideally a period of reflection and evaluation.
Except I’m really quite bad at the last bit, unless someone really asks me – and I mean more than a polite how-did-the-show-go? question - I am rather vague about the successes or pitfalls of any particular body of work. I suppose I’ve got into a bad habit of moving straight onto the next thing, so when Vic asked me to write a wee reflection and update, it was a welcome challenge.

Working at the Pervasive Media Studio was a genuinely extraordinary period in my life, I saw inspiring things, had lots of brain-breaking conversations, shared in the excitement of various developing projects and met some truly wonderful people who have changed how I live life.
And if I am allowed to say this -  I am proud of the work I achieved there. Working on The CleanMeat Revolution helped me to put into solid form a number of ideas I had been playing with for a while, and in doing so confirmed a few suspicions:

1. humour can be helpful – some of the most consistent feedback from visitors and staff at We The Curious was that the mock museum labels not only enhanced the sense of narrative but prompted some wry smiles. When dealing with potentially heavy material – i.e. the future of farming, climate collapse, hunger and global inequality – it is easy to be preachy or worthy, but a well placed gag makes us laugh, and a very well placed gag makes us wonder why we laughed and points a finger directly and uncomfortably on the heart of the matter, which is usually human behaviour.

2. future – histories can work – One of the hardest things about this project was trying to describe it well in a couple of sentences. ‘it’s a sort of museum exhibition looking back at the 21st century, and with objects and things that haven’t happened yet, but in the future, where the exhibition is, they have already passed. But actually its based on things that are happening now – as in Now now – and imagining them forwards, but treating them as history.. um… yeah – like that.’
As you can see, I struggled at first. But again the feedback confirmed that considering a potential future as history helped people to make a mental leap, and think more carefully about the kind of lives they want to be living in the years to come. This made me very happy indeed.

3. trust others – One of the things I realised during this project is that I don’t have to understand everything, this is embarrassingly obvious in writing, but is something I struggle to keep in check. A natural curiosity about the world often leads me to try and understand exactly how something works when sometimes I should just trust the person who is telling me it does work. Perhaps this is not foolproof, but I can tell you that within the studio it is a pretty safe bet.
During the install there was a potentially stressful situation when a piece of software decided to stop playing ball. Now I had the extraordinary good fortune of working with Tarim on this who is an absolute gem; a gracious, generous, genuine expert. So in this particular moment, I simply had to hand everything over to Tarim – I was utterly redundant at this point in time, a position that would ordinarily smart my ego, but in my own uselessness I found a sense of freedom, because I trusted Tarim. And I had every reason to; he worked for a few hours, doing incomprehensible things with code, drank a decaff coffee and voila, the software was back on our side.

This intention to trust is something that I’ll be taking into my next project. Once again working around themes of future food-resilience, Last Ditch Attempt is a collaboration between myself and another North-East based artist, Lucien Anderson.

Key to our project is the recent flooding of the Svalbard Global Seed Vault. At 78 degrees north it “is the ultimate insurance policy for the world’s food supply…and will secure, for centuries, millions of seeds… It is the final back up”. Last year warming surface temperatures caused the permafrost to melt and water cascaded in. It was designed to run without human intervention, but now constantly monitored pumps are being installed. This monumental, permanent stronghold clearly won’t work forever - we need a new strategy.
Last Ditch Attempt is part spectacle, part speculative solution; a mobile seed library housed on a modified cargo tricycle that acts as a starting point for a seed-sharing network.

Taking inspiration from decentralised systems, we will begin with a large deposit of open pollinated seed capsules, cycle around the North East meeting horticulturalists, gardeners and novices alike, hand out seed capsules and work together to initiate a new seed-sharing network. Something like this obviously requires us to trust the people we meet, talk to and give seeds to. By its own measure, if we find ourselves trying to control this network, it has failed. We will have to be ready for all the messy disappointments that might come our way, but if there is one thing that working with Pervasive Media Studio has taught me, being open and generous is worth it.

What might we eat in the future, and how will we produce it? A brief summary of my research so far.