My winter residency has allowed me to reflect on my practice and my radio airspace project. The Studio has allowed me to fully explore the radio themes I was interested in those being scanners, pirate radio and drones.

I had several ideas which I have used my Pervasive Media Studio time to further explore, initially I was very attracted to how I could use light rays in the gallery, however I am somewhat limited to my initial proposal and funding for the Heathrow exhibition. The day I had with technologist David was really useful in terms of having a creative coder input and so wish I could have had far more time with him to explore that side of the project, as it’ s certainly something I’d like to come back to with more time and larger exhibition budget.  Giving a talk at the Watershed allowed me to share my current progress, and how my research has drawn me to the current way people scan and listen into aviation and marine radio communications using computer software and my focus is now around this activity, which also ties into another project I am working on this year 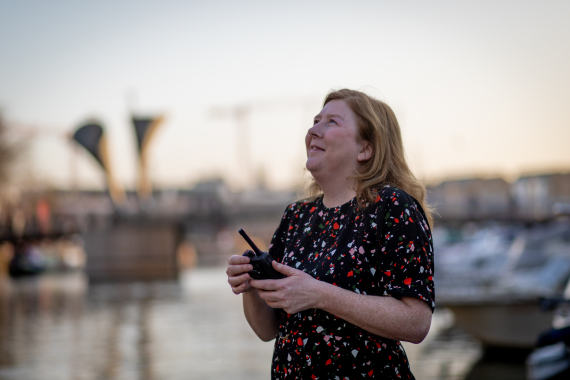 I have been commissioned with fellow artists: Ailís Ní Ríain, Carol Anne Connolly, David Stalling, Kennedy Browne and Robertina Šebjanič  to create compelling stand-alone art works for radio broadcast in Ireland and Europe. I will be artist in residence on journey in August from Galway to Hamburg on the Celtic Explorer a research vessel which uses sonar to scan the seabed and I will developing the work whilst at sea.

The project invites Irish and European listenership to rethink modern wireless imagination to reconnect with our ocean wilderness one of the last remaining unknowns. My first visit to Galway last summer took me to an important Marconi site where radio and aviation history collide in spectacular fashion. The remote site of what was once a huge and first commercial trans-atlantic station of Guglielmo Marconi.

The station was built in the remote bogside area of Derrigimlagh Ireland built directly after his first trans-atlantic broadcast from Poldhu in Cornwall to Newfoundland on 12th December 1901. Marconi received $80,000 from the Canadian Government and built a station at Glace Bay Nova Scotia and set up a permanent station at the most westerly point he could find choosing Derrigimlagh after testing various sites.

Derrigimlagh is an unforgettable place, the peat bog is flanked by the stunning Connemera Mountains known as Na Beanna Beola the Twelve Pins. There is a breathtaking 5km circular walk around the abandoned site, and wind up interactive audio hides, tracing some of the history via recorded broadcasts alongside several historioscopes, which made me want to learn more.

The station started commercial signalling between Derrigimlagh and Glace Bay on 17th October 1907.  It housed a gigantic condenser house, a power house with 6 boilers and an aerial system consisting of eight, 210 feet high wooden masts,  extended eastwards over a hill for half a km. The aerials gave off huge sparks as they carried very high voltages which could be heard across the area.

On the site there is now a cone shaped memorial a tribute to British airmen John Alcock and Arthur Whitten Brown. Who were the first pilots to fly non-stop across the Atlantic from St Johns Newfoundland in 1919, they choose to crash-landed their Vickers-Vimy biplane in Derrigimlagh Bog land thinking it was just flat ground behind the Marconi wireless station. This first transatlantic flight took them 16 hours 28 minutes. The flyers who wore electrically heated overalls, fur lined gloves and helmets and delivered another world first in communications by delivering the first transatlantic airmail in history by bringing a sealed post office mail bag with private letters with them. They recognised the Marconi site by the masts and decided to crash land into what they thought was a field but was actually bog land next to it. This was world news and can be seen as the perfect accidental, ground breaking PR radio stunt for their flight and Marconi site were now also forever linked in aviation history. News that Marconi a known master of public relations must have been overjoyed with.

The station closed in 1922 after it was attacked by Irish republican forces. Marconi sought compensation from the Irish government which was not forthcoming and the station, which at its height employed several hundred people and had its own railway line was closed shortly and contents sold for scrap.  Technology advances meant a more powerful station was built at Caernarfon in North Wales as the radio revolution moved on at a heightened pace. It was amazing to experience, how this remote bogside place once played its part of the most innovative radio technology in the world run on peat power.

The history and uses of wireless are profound and expansive, industrial, scientific and political. I am really looking forward to further engaging with radio airspace and its use at sea over the next year.

I also wish to meet Galway based performance artist and activist Margaretta D’ Arcy, an important figure in Irish culture, Irish pirate radio and womens rights. She campaigned to stop US military flights into Shannon Airport amongst many other achievements. Some of which you can read here.

I will be at the audiograft festival in Oxford on March 16th record peoples dreams acround Brexit for my ongoing dream space project which is documented on my blog which you can read here alongside my past and ongoing projects.

Also my work Transmission Spores will be on exhibition 27th of April to 11th of May  for Sound of Nature: the relation with plants and trees at Plateforme Intermedia Nantes (France).