My first days at the Watershed were a buzz of meetings and events where I spoke to many inspired artists about current work and projects. 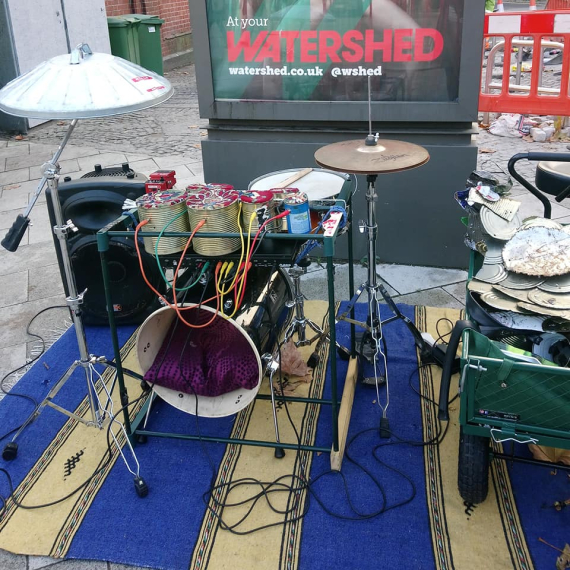 As first impressions go, I found the PMS to be a hive of activies and buzzing enthusiasm, which made it very clear to me why so many artists use the space to interact on projects, 150 artists in fact have now worked with the studio which is very impressive.

I met with Duncan Speakman, a fellow sound artist and listened to his excellent augmented audio walk, Only Expansion which mixes live binaural sound into his composed Bristol soundspace, allowing the listener to be an active participant of the walk. It’s certainly the closest I have come to being on an out of body experience, specifically as my own voice was amplified in such a way, ordering a coffee was like communicating from a different realm amazing stuff. A walk I knew well around Bristol docks, was enhanced by this sonic intervention, specifically as it pulled in the sounds of the city in such a playful and engaging way, busses roared past like goliath creatures, constructon workers became part of the drama, a feast for the ears if only Walter Ruttman and Vertov could have heard this sonic adventure, the city remixed as private performance. I took the photo here of a handmade drum kit I came across sitting in front of  a poster for the watershed, at the start of my walk, while the world vibrated around me and for the first time in my life, apart from being at a Faust gig, standing next to a road drill was music to my ears.

The experience was fantastic. It reminded me of the sonic instrument made by Kzysztof Wodiczko, a designer for Unitra – a Polsh state electronics conglomerate – who worked with The Polish Radio Experimental Studio (PRES) studio to make Osobisty/Personal Instrument (1969). A device worn on the head and hands that responded to movement to remix the city. Allowing the participant to amplify and adjust the sonic environment. The sensor on the glove turned the hand into a microphone when arms were raised this filtered the sounds allowing the wearer to conduct the city, making everyday sounds of traffic, footsteps, conversations sound like orchestra instruments.

Duncans work had a similar effect, but did not allow personal control per say, but I really enjoyed the experience especially as it cast light on what the Osobisty may have sounded like. Perhaps this is a future collaboration, gloves would have been handy too in this this case as I had to take mine off in the bitter cold to read the designated instructions.

I saw another fellow resident Salinder Bual making live music with pinapples, which is certainally novel at a pinapple jam at the Colston Hall and I suspect a world first. I also attended the PM studios WITCiH event run by London musician Bishi  with the studio at the Bristol Science Museum, now rebranded as “We are the curious” which I still can't quite fathom name wise, which afforded me a chance to see to her in action alongside some excellent artists such as Coral Manton  and  Laura Kriefman dancing in lights for a WITCiH night aptly celebrating women and tech.

I also caught a talk about virtual realty dance research project with Lisa May Thomas which afforded participants a tactile experience across environments, looks like I will have to be careful as there seem to be some great distractions at the PMS.

David Haylock and Victoria Tillotson discussed with me how best to make the most of my time R and D my latest project. I'm looking into producing a light and sound installation around airflight so our discussions were really useful and left me feeling confident and excited about the projects possible directions. I will be spending the next few weeks researching the area further and considering technical set ups. It's easy to feel at home in the studio very quickly, as an artist who usually works independently most of the time its great to have such a team around me on this residency to help with planning and ideas.