No so long ago I learned the word ‘ineffable’. It is a word to describe something that is so unspeakably beautiful, moving, or horrible that it is beyond expression.

We live in capitalism, its power can often seem inescapable - but then, so did the divine right of kings. Any human power can be resisted and changed by human beings. Resistance and change often begin in art. Ursula…

My favourite bread is called Rearsby. Although I'm immediately wondering if it's a fictional bread. Real or not real, for me it's baked just outside Leicester where I grew up. Or was baked there? I don't think it still is because I haven't seen it for a long time, but maybe that's because I made it up. It's hard and dark and heavy and nutty and best toasted with cheese on it. Jo

No so long ago I learned the word ‘ineffable’. It is a word to describe something that is so unspeakably beautiful, moving, or horrible that it is beyond expression. If something is so powerful or emotional that you can't even describe it, it’s ineffable. I understand that the naming of something can seem to reduce its potency and yet an idea without a word can be difficult to acknowledge, seek out or protect. And so, in many ways, it becomes harder for us to access.

Perhaps then it is a cruel trick of individualism that English gives us no commonly held word for what Bill calls the ‘mutual qualities of life’. Things that can only exist in their ideal form when they are experienced collectively – being a part of them both makes us more fully ourselves and the thing more fully itself. Like, justice or conversation or love or friendship – none of which (I would argue anyway) have very much meaning unless we experience them with others. Something might look like conversation; but if everyone involved doesn’t feel able to be themselves then authentic exchange is not happening and so it isn’t really conversation (or at least it isn’t a good conversation).  We sense the lack of this mutual quality of life when we want it but don’t find it, it feels like exclusion and it hurts. We also, hopefully, recognise it when we do find it. It feels something like humanity.

We believe that Watershed is at its best when it provides a container for moments of shared experience. The Equitable Futures group is going to use the Three Horizons to vision and design together, but first we have been spending some time familiarising ourselves with those mutual qualities. Asking when we have felt them, when we have felt them in our interactions with Watershed in particular and when there has been something that has got in the way of that.

Our rough plan is that once we have built this awareness we will work together to imagine a Third Horizon (the future). One of the questions for that might therefore be; what would Watershed be doing if it embodied the mutual qualities of life? From that vision we will move to the First Horizon (the status quo) to understand what we must let go of or decommission in order to get there. Finally we hope to turn to the Second Horizon (the seeds of change) to consider where to start. 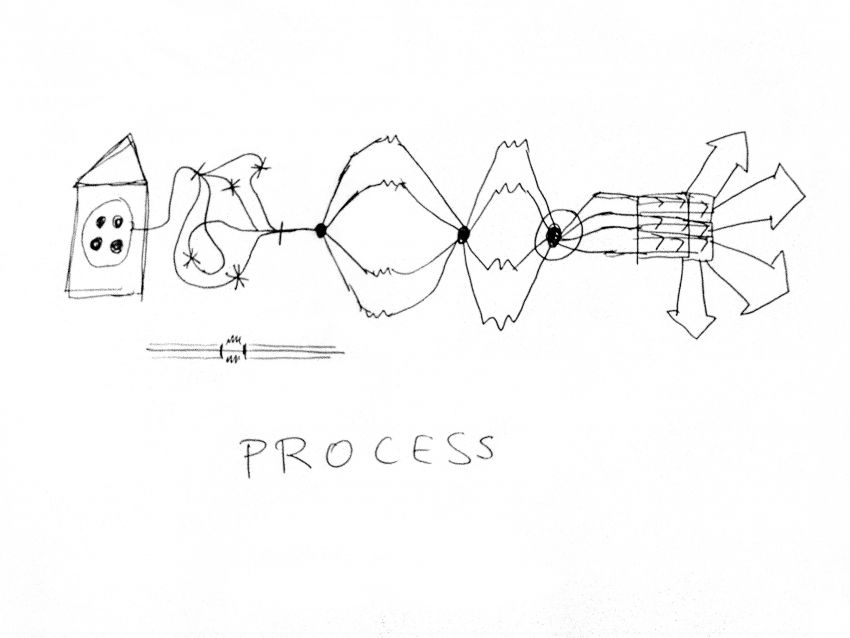 The relationship between one’s singular experience and our existence as part of a group is what Bill calls ‘the fundamental dilemma of being’ and this is really core to our understanding of common ground. To explore this and as part of our session on the mutual qualities of life we (Bill, Zahra and I) wanted participants to share some thoughts that spoke to their individual sense of themselves and to their relationship to the world around them. To unearth both commonality and difference we asked everyone to write (immediately and without stopping for 5 minutes) and then share their responses to the same prompts; tell us about your favourite bread and describe walking into your favourite building.

I am ending this post with some of those pieces of free-flow writing because they offer insight into our participants. But also because listening to them was, for me, like studying someone’s fingerprint; you become aware of the unique beauty of its pattern and therefore conscious that you must also hold such wonder.

My favourite bread is nead by the knuckles of my fist. Soft and airy, with a crust so thick. Wholemeal grains ensure a hearty sandwich. Fresh out the oven, it's firm yet kind, flexible but sturdy. I think I'm gonna make some later today. Alexie

My favourite bread is the 7 seeded sourdough from the Old Market Assembly which is it quite expensive. I like to have it the first day dipped in hummus with a piece of cheese. And then when it gets to the second day I like to toast it, either with cheese or and with a bowl of soup watching Loose Women at lunchtime or with scrambled eggs for my Saturday or Sunday breakfast listening to a podcast. This week I've broken all the rules, Loose Women isn't being screened because of the Cheltenham Races and the bakery ran out of sourdough. So I just got a plain wholemeal. I'm not sure if these 2 things are related, time will tell. Tom

My favourite bread is Sabaayad. It's a Somali Paratha and it's delicious, buttery and flaky joy and my absolute favourite thing to have in the morning with more butter and a little sugar and a cup of tea. It is the bread that Hubba Hinder Anon in in Stonebridge used to make for everyone. It's a faff to make and I'm pretty sure it was a burden for her to make it for the whole community, coz everyone was too lazy to make it. It's a super simple process but it involves a lot of patience and repetition to get the layers in. You have to be in the right frame of mind. Fozia

So my favourite bread. I just love plain old sliced white bread. It's something when you know you're loving yourself or someone loves you they cut the crusts off it for you. Coz I mean, those are going to rot in your stomach aren't they? I love it cause it's dinner or dessert. I love it, cause it's savoury or it’s sweet. I love it because it's a secret from itself - how bad it is for you and how good it is for the soul. And I love it because each part of that, the soul or the body doesn't really care to ruin the relationship by asking why. I like that you can smush it down like till it's like a soft  bit of paper. And I love that if you get it from Warburtons it literally lasts forever. I don't know why it doesn't rot. I like that is so cheap that almost every family in the UK can afford it. And then when you put chips and ketchup in it, it feels like home. I like that it's a terrible habit that may not actually make it to the next generation and in that way it's like the dodo of bread. Zahra

Okay, so my favourite building is actually my house, which feels kind of boring and I'm slightly embarrassed about saying that given lockdown and the fact that I don't drive and I've really had to spend all my time here recently. But walking into this space is just such immediate relief and joy and relaxation. I think most about the times when I've been away from home for weeks because of working in another town and then the journey back normally by train then taxi and then the excitement of getting my keys out or if I'm really lucky Tim will hear the taxi pull up and open the door for me and then stepping in through the door. And in my mind, it's always into the dry because it's usually raining outside and I step into the hall and I close the door and the sound changes. And then the feel of carpet under my feet as I take off my shoes. Tanuja

There's a design museum in Tokyo called 2121. No its not its watershed. I open the doors and say hello. I don't know what will happen today. I walk up the stairs. There's light streaming in the cafe bar. No, I'm embarrassed. I enter the museum, the surfaces are cool and grey. I'm alone. No one knows who I am and I know I'm about to see something beautiful and interesting but of course really I'm in the cafe bar and there's a busy hum of people getting ready for the day and I sit and hum with them. Clare

I have to say sorry mine took a bit of a sad turn, and also I don't actually have a favourite building. So I just went with what was my favourite place a couple of years ago. In the city where I did my PhD, there was a cinema that was a dingy basement with tiny screens and 10 small theatres. The damp blue carpets had stains. The toilets were clean enough I guess. But it was my safe space for four years. The folks there knew me well. Even though the tickets were only 5 pounds, there were many times when they upgraded me to a premium seat for free. That building, those people, served as a comfort for me when I was alone. I hid in the sights and sounds of movies, sinking into seats that probably hadn't been cleaned in years. The building, the people, were there after Prof died. They were there when Daddy died. They were there when we broke up. They were there when I decided to live. Furaha

I think my favourite building is probably the block of flats in Barton Hill that are yellow. Mostly because I think they are painted with the sun and because I unofficially grew up around them and some of my family still live there. And when you get up onto the highest floors it is exhilarating and felt powerful somehow or you feel dizzy and cling to the sides. And mostly because they feel like Guardians. I remember playing in the park and being surrounded by blocks of flats, so even when night fell, you felt like you were watched and held. Asmaa

As Equitable Futures starts using the Three Horizons model, we share a bit about Watershed’s history with it as useful context for understanding why we have returned to it now.

There is loads to do, it feels thoroughly incomplete. Which is exactly how any project thinking about an equitable future should always be.