Watershed develops cultural engagement, imagination and talent, in the belief that the route to better futures is open, disruptive and co-produced. With our audiences and participation at the heart of our organisation we produce and present original ideas and content and curate a diverse programme of talent development, cinema exhibition, events and festivals.

Watershed and our Pervasive Media Studio (a city-centre research space) occupy the first floor of a historic Grade II listed building at the entranceway to Bristol's Harbourside.

In the building you will find three cinemas, a large, light and airy Café & Bar, flexible conference and events spaces and the Pervasive Media Studio, our research space which brings together a network of over 100 artists, technologists and academics to explore the future of mobile and wireless media.

In all of our work we seek to produce open collaborations and create opportunities which bridge expertise, imaginations and boundaries to promote new ideas and enjoyable experiences.

Bristol has a growing Creative Economy and is a leading creative technologies innovation centre with the Cultural Sector operating as catalyst and connector.

"New technology, the arts and a vibrant youth culture have helped to make this one of Britain's most cutting edge cities."

The range of assets is world class but it is the spirit of open collaboration which really marks out Bristol as a unique centre for innovation at the intersection of arts, media and technology sectors.

“Bristol is unique in combining excellence in new technologies and creative content. It is this cross over which marks it out.”

Lord Sainsbury at the launch of S-Park Bristol

By playing the ‘connector’ role Watershed has developed to be a public facing cultural and creative economy hub for Bristol city region with strong networks amplified through the cultural programme. It is the open cultural approach combined with wide public engagement and a strong showcasing ethos which has enabled Watershed to leverage its arts profile to become a trusted connector for the Bristol city region.

“Watershed is a prime example of a highly connected, flexible, porous piece of cultural and creative infrastructure, of which there are too few examples. Watershed is more than just an arts cinema. It is at once a cultural centre, a business broker, a social networker, a research and innovation facility, a café/bar, and a cultural tourist attraction.”

Read more information on Watershedʼs role in the cultural and creative economy.

The story of Watershed is one of both idealism and pragmatism:

In the 1970s an Arts Centre built by enthusiasts in King Square Bristol became the first of the British Film Institute’s Regional Film Theatres. The founders ran the venue with dedication and passion, but the building was in a state of disrepair and due to a lack of funding its future was uncertain.

In the early 1980s, the City was looking to regenerate the derelict harbourside area. In partnership with the British Film Institute, JT Group, and Bristol City Council, funding was secured to expand and relocate the Arts Centre into Watershed’s current home with a new focus on media – particularly film and photography. 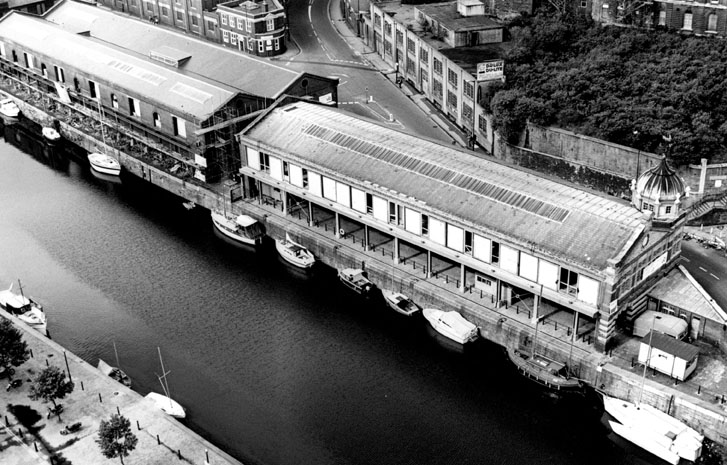 Watershed opened its doors in 1982 and declared itself to be ‘Britain’s First Media Centre’ seeking to capture and contextualise the shift in media at the point when satellite TV and Channel 4 were starting up.

Key to our continued success was a £3.5 million Capital Development investment programme (funded through Arts Council Lottery) completed in 2005 which enabled us to meet the growing demands of our audiences and partners.

Since those early days in 1982 the organisation has changed and evolved but the original sense of being at the cutting edge has remained central to our DNA.

It’s not always been easy but the fact that we are still thriving owes much to our many supporters, the people who love what we do and have created the Watershed community.

About us Based in Bristol, Watershed has three cinemas, the Pervasive Media Studio and a café & bar. As a charity we advance education, skills, appreciation and understanding of the arts with a particular focus on film, media and creative technologies.  Find out more 'Britain's First Media Centre': A History of Bristol's Watershed Cinema, 1964-1998 Read a research article examining the origins and development of Watershed from 1982 to the late '90's.  Find out more