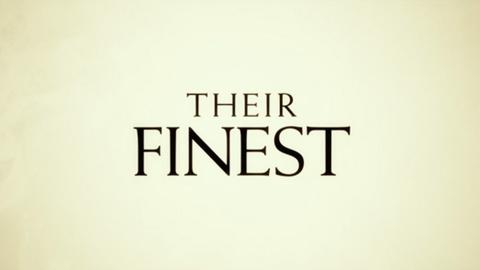 Gemma Arterton shines as Welsh wordsmith Catrin inspired by the real-life Ealing Studios' screenwriter Diana Morgan in this witty WWII charmer from Lone Scherfig (An Education). She lands a job writing the women’s dialogue for the Ministry of Information’s morale-boosting propaganda film unit on the rather condescending basis that she can produce “slop”: plausible women’s dialogue for the female characters.

She of course gets paid less than the men around her, despite being more talented than the lot of them. She comes into her own when crossing paths (and swords) with dashing producer Tom Buckley (Sam Claflin) and outrageous old thesp Ambrose Hilliard (Bill Nighy). As bombs drop all around them, Catrin discovers there's just as much drama, comedy and passion behind the camera as there is on-screen. A love letter to British filmmaking and celebration of women's contribution to the industry.

Behind The Lines – Women and WWII British Film Article Their Finest producer Stephen Woolley writes about the female-focused wartime films that make up his Girls Like Us season, and how the breakthrough had a galvanising effect on the industry as a whole.  Find out more

Girls Like Us Season World War II Britain gave fertile inspiration to emergent women writers, producers and stars, and resulted in some astonishing propaganda movies that merged stark reality with fiction and fantasy, many with a female bias.  Find out more
Cinema Rediscovered 2017 Thu 27 - Sun 30 July 2017 Join us for the second edition of Cinema Rediscovered - a chance to discover some of the finest new digital restorations, contemporary classics and film print rarities from across the globe where they were meant to be experienced - on the big screen.  Find out more