Steve McQueen's blisteringly powerful new film 12 Years A Slave has been screening here at Watershed for five days, and the audience reaction to it has been remarkable. This brilliant story of endurance, guile and hope has touched the Watershed audience (not to mention picked up the Golden Globe for Best Film) - so we thought we would write up a short summary of what's been happening here thus far.

The critical response has been tremendous - "it is a film that necessity and education demand seeing" (The New Republic), "what we have here is a blistering, brilliant, straight-up classic (Rolling Stone). It is "a must-brave experience" (Telegraph), one that "if you have any interest in cinema - or, for that matter, in art, economics, politics, drama, literature or history - then you need to watch" (Observer).

Our Cinema Curator Mark Cosgrove wrote recently that McQueen described his films as like pebbles which are thrown into a pond - it's the ripples they make that are interesting. Indeed, he chose the story of a protagonist who survives versus the story of the masses because of how it resonates and creates the ripples with us, the people who watch it:

"The reason I took this angle is I wanted that person to be everyone in the audience. Someone who can take you, the audience, in this unfortunate conveyor belt of slavery. This is a story about one of the harshest structures that's ever been created in the history of the world. It's somebody trying to survive that with their mind intact and they do."

We knew that 12 Years A Slave would provoke strong reactions, so we created several opportunities for people to share their responses online and offline, formally and informally.

We held the first of our Q&As on Sunday with Roger Griffith, Chair of Ujima Radio in St Paul's, where he shared a personal 'Context to Slavery' at the sold-out screening. The comments and questions from the audience were remarkable in their honesty, emotion and authenticity - you can watch the event below:

It was also an emotional experience for Roger, who said:

"I had the honour of hosting the first in a series of Q&As for 12 Years A Slave. As an introduction I gave a short reading from my forthcoming book 'My American Odyssey - from the Windrush to the White House'. It was a personal reflection on the transatlantic slave trade, linking America, the West Indies and Bristol with the impact that had on my life as I travelled through the deep south of America. I touched on several themes, from the TV series Roots, to visiting the monuments of past slave-owning Presidents and the experience of racism in Bristol.

"We then sat through one of the powerful films or occurrences I have experienced in Steve McQueen's excellent and, I predict, landmark film.

"I somehow gathered my thoughts to host the Q&A which proved cathartic for me to an audience of stunned faces. Each person who spoke had a personal and emotive reaction to the pain of watching their fellow human-beings suffering told so movingly and cinematically - if brutally - on screen.

"People continued to weep openly - as they had done during the film - throughout the Q&A. Some were unable to speak but still listened intently, welcoming the warmth of sharing or hearing a different perspective of the film and the issues that surround it. Like the film, no issues were side-stepped: we discussed legacies of the slave trade and Bristol's role in it, oppression and the impact of bullying, the inadequacy of the criminal justice system and the police and modern day slavery.

"We didn't just watch a film - we shared an emotional, cinematic and personal journey together. Quite frankly, cinema-going will never be the same again."

Many of you also shared your thoughts online on Twitter - some highlights over the weekend include:

Just saw 12 years a slave @wshed - it's as brilliant and as harrowing as all reviews say it is. Go watch it.

Just seen 12 Years A Slave @wshed It certainly deserves a clutch of BAFTAs and Oscars, and a lot of pondering on history.

Nothing can prepare you for how emotionally shattering it is, but 12 Years a Slave is an absolutely necessary and vital film @wshed

Paper and pen were a more appropriate choice for others, who added their thoughts to our audience comments cards, which are found on the main noticeboard near the stairs: 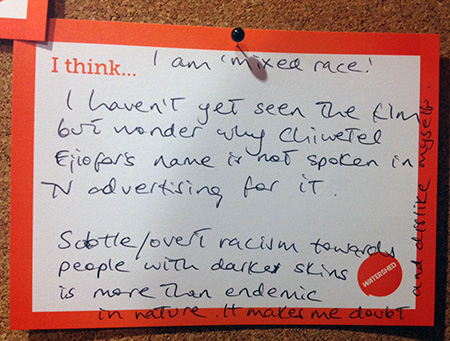 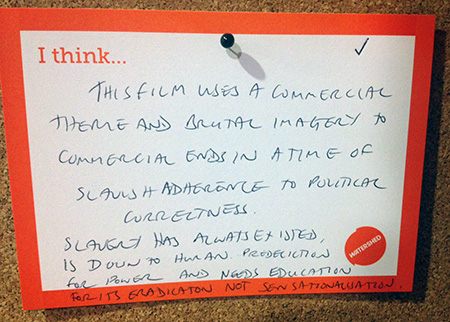 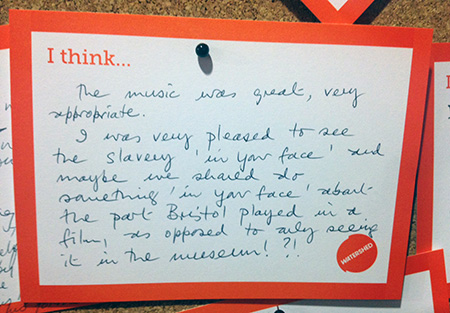 Bristol was also in the headlines over the weekend. This Observer article from Sunday looked at the areas of Bristol, including Guinea Street, Redcliffe Parade, Queen Square and Corn Street, which were financed by Britain's links to the slave trade. University of the West of England history professor Dr Madge Dresser, who is quoted in the article, will be talking more about slavery and public history at her special Q&A after the 14:00 screening of 12 Years A Slave on Sun 26 Jan.

If you haven't seen the film yet, there are at least two weeks left for you to catch it, and there are still lots of opportunities to get involved.

This Wednesday (15 Jan) sees the first of our evening Twitter chats themed around 12 Years A Slave - our Cinema Curator Mark and Roger Griffith from Ujima will be leading the discussion, and you can take part by using #12shed between 18:30-19:30.

At our next Sunday Q&A we welcome writer, historian and commentator Dr Edson Burton for his 'Slavery on Screen' talk, where he will look at past cinematic depictions of slavery, and highlight how 12 Years is different from its predecessors. Edson was also kind enough to share his personal reflections on the film in a news article, which you can read here.

For those who would like a more informal discussion, feel free to get your voice heard at one of our informal meetings in the Café/Bar, happening after the 17:30 Tuesday screenings and the 14:20 Saturday screenings.

The Oscar® nominations are out on Thursday. After the Golden Globe win, it's a safe bet that 12 Years A Slave will be the frontrunner for the Best Picture prize, but whatever film wins on the night seems almost redundant - the fact that this incredible true story can finally be shared with audiences around the world is the real achievement here.

Qezz gives us some tips on staying sane during lockdown

Rife Magazine's Qezz gives tips to those who thrive around other people for staying sane during lockdown. More