Wednesday’s forthcoming Afrofuturism screening is Black Sci Fi (18:00hrs) - the simply titled 1992 documentary – which takes a closer look into a specific time in the history of black science fiction in literature, film and TV and features interviews with key figures from across these artforms. We are delighted that Cheryl Morgan critic, editor, publisher and Ujima Radio presenter has kindly written this piece which takes a look at the rise, prominence and importance of black authors in sci fi, and their position today. Many thanks to Cheryl for this great insight and for also including some great reading recommedations to help all of us interested in exploring this world further. Enjoy!

Back in the early days of American science fiction the genre had a distinctly frontier narrative. Man might have settled all of the USA, but beyond that were the planets and the stars: colonies beyond end. Gene Roddenberry persuaded Hollywood to let him send a black woman and a Japanese man in search of the Final Frontier, but the majority of the crew of the Enterprise were various shades of white. Their enemies, the Klingons, had much darker skins.

Away from the big money of Hollywood, it was easier for writers to create different visions. Many black writers have achieved significant success writing science fiction. Mostly their themes are similar to those of white writers, though their work is often informed by the understanding that, in the traditional SF narrative, they often count as aliens.

Proudly gay as well black, Samuel R. Delany is proof that science fiction embraced diversity as far back as the 1970s. His many novels address issues of race, sexuality and gender identity far more effectively than those of most of his white contemporaries. He is the only Person of Colour to have been elected a Grand Master of the Science Fiction & Fantasy Writers of America, which puts him on a par with the likes of Clarke, Asimov, Le Guin and Aldiss. Delany novels to try include Dhalgren, Triton and Stars in My Pocket Like Grains of Sand.

Octavia Butler was another pioneer of black SF. She was a contemporary of Delany, but being female took longer to earn the critical acclaim she deserved. In 1995 she was awards the prestigious MacArthur Genius Grant, a mainstream art prize.
Butler novels to try include Parable of the Sower and Parable of the Talents which should appeal to modern fans of dystopian literature.

Another early pioneer of black SF is Steven Barnes  who has written a number of collaborations with SF legend, Larry Niven, as well as his own works. His best known novel is Lion's Blood, which postulates an alternate history in which Islam is the dominant world religion and white people are commonly enslaved. His wife, Tananarive Due, is also a science fiction writer, and the couple have written several books together.

More recently a number of Caribbean authors have published science fiction. At Ujima Radio we take a special interest in them and have interviewed the leading figures. Nalo Hopkinson (Jamaica) writes mainly fantasy, but her Midnight Robber imagines a future in which Caribbean people have their own colony planet. Nalo is notable for being unafraid to let her characters speak in Caribbean dialects.

Karen Lord (Barbados) won a host of prizes with her debut novel, Redemption in Indigo, which is primarily fantasy. Her second novel, The Best of all Possible Worlds, is social science fiction in the tradition of Ursula Le Guin.

Stephanie Saulter (Jamaica) is part way through a series called ®Evolution which uses themes of genetic engineering to examine social issues in near-future London. The first two novels, Gemsigns and Binary, are available.

Rhonda Garcia (Trinidad) is the newest kid on the Caribbean block. Her debut novel, Lex Talionis, is a fast-paced space opera.

People of African descent are found in other Commonwealth countries. A good example is Canada's Minister Faust, who is a well-known radio presenter as well as a writer.

Authors with a close connection to Africa are starting to emerge. Chief amongst them is Nnedi Okorafor whose parents are Nigerian. Much of Nnedi's work is inspired by that country, and she has won the prestigious Wole Soyinka Prize for her children's fantasy, Zahrah the Windseeker. Her latest novel, Lagoon, imagines what might happen if alien invaders, instead of touching down in New York or London, chose to descend upon Lagos.

Ramez Naam was born in Egypt but now has a successful career as a futurist in the USA. His novels, Nexus and Crux, deal with the development of drugs that can give humans enhanced mental abilities. Egypt also has a thriving science fiction tradition in Arabic. One novel, Utopia by Ahmed Khaled Towfik, has been translated into English. It tells of a near future Egypt in which the rich have retreated into walled enclaves guarded by foreign mercenaries.

The science fiction genre often expands to include fantasy, if only because authors can't resist including elements of both in their work. While fantasy by black authors doesn't exactly imagine a black future, it does place black characters front and centre in a form of fiction too often dominated by whitewashed visions of the past. Leading black fantasy authors include N.K. Jemisin and David Anthony Durham, both African-American, and Sofia Samatar who is of recent Somali descent.

Publishers and bookstores tend to keep books for teenagers in a separate category to adult fiction, but they include a huge amount of SF, some of which definitely classes as Afrofuturist. Britain's Children's Laureate, Malorie Blackman, has written Noughts & Crosses and its sequels, which deal directly with issues of race. Another fine novel is Alaya Dawn Johnson's The Summer Prince, a tale of love, political intrigue and inter-generational conflict in a high tech city in future Brazil. 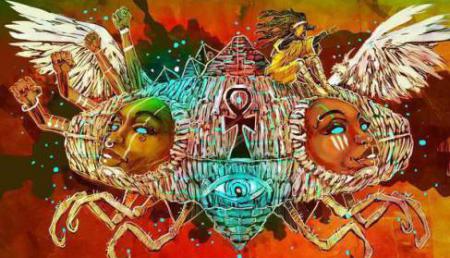 Science fiction has always had a strong tradition of short fiction, and a good way to find up-and-coming writers is in anthologies. Look out for books that call themselves Post-Colonial as well as Afrofuturist. Some examples are Afro SF (Ivor Hartmann), Mothership: Tales from Afrofuturism and Beyond (Bill Campbell & Edward Austin Hall), We See A Different Frontier (Fabio Fernandes & Djibril Al-Ayad), Dark Matter (Sheree Thomas), Whispers from the Cotton Tree Root (Nalo Hopkinson), Mojo: Conjure Stories (Nalo Hopkinson) and So Long Been Dreaming (Nalo Hopkinson & Uppinder Mehan).

Thanks in part to the association with Post-Colonial literature, the label Afrofuturism is often extended to all non-white writers. Two fine examples are Aliette de Bodard (French-Vietnamese) and Samit Basu (Indian).

Black Sci-Fi + Short screens on Wed 15 Oct at 18:00 and will be introduced by Afrofuturist author Ytasha Womack.

By buying the Rife book from Watershed you are directly supporting Rife’s work - buy at Box Office or online now. More