MekaMon from Studio Residents Reach Robotics will soon be in the shops. We look back on their journey so far and invite you to come and play to shape the future of gaming...

Most people come into the Pervasive Media Studio with a set of questions that they don't know the answer to. The Studio is a place for experimentation, exploration and diversion and we wouldn't have it any other way. Silas Adekunle however, has broken that mould in a way that we are very excited about - he has made, and launched, the specific product that he started talking to us about over four years ago.

That is not to say that nothing has changed during his time in the Studio, or that it hasn't been incredibly hard work. In 2013 when I first met Silas, still an undergraduate at UWE Bristol, I'm pretty sure that he described what he was making as 'robot Pokémon'. 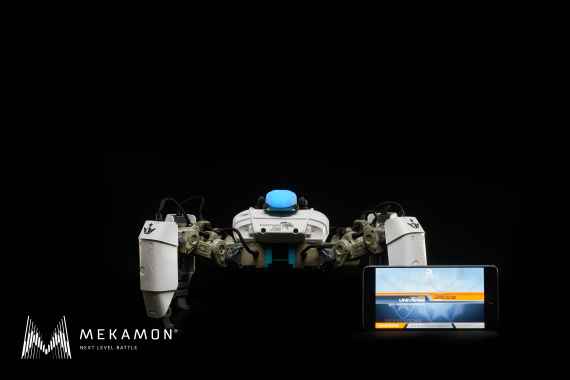 MekaMon are actually multi-functional, connected battlebots with augmented reality capabilities that are a dream come true for anyone who loves games, robots, and robot games. Sharpen your skills in single player mode and fight hostile aliens, play arcade games or challenge another bot to warfare. Their physical presence is very impressive, they scuttle around the floor and respond to attack with creepy life like movements.

This is the result of extreme dedication and ambition from Silas and the company he founded, Reach Robotics. In 2015 they were selected for the first Qualcomm Robotics Accelerator in San Diego, USA. They made rapid progress and many connections with potential investors. Over the course of the following year they were able to raise significant venture capital funding (some from as far afield as Singapore).

This international reach is supported by its home grown roots. Reach Robotics are a brilliant example of how the Bristol ecosystem can work when it is at its best. Their primary home has been at the extraordinary Bristol Robotics Lab and is now next door at Future Space (as their team continues to grow), they have been supported by Hewlett Packard, The Prince's Trust, SETsquared and the Bristol Games Hub. Each of these have contributed something different and I think working with Silas has helped us all to understand our unique offer to developing companies.

As residents of the Pervasive Media Studio and as participants in REACT (a collaboration between UWE Bristol, Watershed, and the Universities of Bath, Bristol, Cardiff and Exeter, which was one of four Knowledge Exchange Hubs for the Creative Economy funded by the AHRC) we have worked with the team to think about the character, storytelling and game design aspects of the product. Through collaborating with academics Seth Giddings and Esther MacCallum-Stewart , the team were able to develop the world around MekaMon to engage players more deeply, and hopefully for longer. By being part of the Studio community more generally they gained insight about playfulness and the importance of trying things out with your audience.

Which is why we are so delighted that Reach Robotics are here at Watershed next week for the final play testing stage before launching later this year. They would love to invite you to play with MekaMon at one of six sessions where you’ll get to battle with the robot, ask questions of the team, and they’ll pick your brains to help refine the final product. You don’t need to have any experience with gaming or robots at all, we’ll show you how to play.

Come fight it out on these dates:

There will be specific sessions for families and teenagers, and everyone is welcome. Everyone who plays will be entered into a draw to win their very own MekaMon (worth around £250) so you can continue the fun at home.

You can sign up here to attend and be part of this Bristol story.