Shorrock Developments Ltd in Blackburn Lancs were the first UK company to sell airband radio, costing about £36 pounds about £700 today. These radios were designed so people could listen into radio flight communications. Shorrock radios used germanium transistors which often developed a fault over time called the tin whisker effect, which caused a reaction inside the can and caused small conductive tracks to form and short the transistor junction, making component fail and hard to fix. I have a fantastic old school radio that uses germanium, that is still working and many vintage scanners still work today.  Germanium, is currently experiencing a renaissance as a semiconductor material, attracting interest in the silicon tech industry. It’s perceived as a potential candidate to use well beyond the end of silicon, so its Interesting as ever to see how this part of radio radio history may still part of our digital future, so let’s get back to scanners.

Scanning air frequencies is a world-wide hobby with aviation enthusiats and has a long and mostly undocumented history. Which I am starting to address here.

I found a great photo which I have shared on my personal blog with other related pics, it shows one such group  (Liverpool Echo Jan 12 1967) :"The busy midnight scene at Liverpool Airport, with a Trident from Amsterdam in the centre. It was a bumper occasion for these members of the Merseyside Society of Aviation Enthusiasts"  Clearly one of the men is holding a large radio receiver and a not very portable one at that.

Heathrow aviation society is 52 years old and in recent years its volunteers have been enlisted to help combat terrorism. Plane-spotters can now apply for identity cards and a code of conduct encouraging them to report anything suspicious. Scotland Yard backs the scheme, introduced by aviation enthusiasts' club LAAS International. The BBC reported “Aviation enthusiasts are watching the activities of the airport every day and their legitimate interest can only be to our advantage".

Owning a scanner is not illegal, however listening in is, although it seems rare to be prosecuted for it in the UK and it hasn’t stopped an industry growing up around it or the many now online groups who share advice and support.

Abroad there have been serious legal ramifications for the hobby in November 2001, fourteen aircraft spotters mostly British apart from two Dutch, were arrested at an open day at a Green air base in Kalamata. They were charged with espionage and faced 20-year prison sentences if found guilty. After six weeks in prison they were released and the charges reduced to the charge of illegal information collection. At the trial in April 2002 they were stunned to be found guilty, with eight of the group sentenced to three years, the rest for one year. They appealed and were acquitted a year later.

Digital encryption of services and the ability to use sites which map out planes flights does mean there is a lot less to listen to which means the hobby is in decline.The internet is now a bit of a grave yard for past activity, its full of discussion boards, tips and videos of how to use them and they were certainly popular with the older generation. Scanners enthusiasts have always managed to keep a low profile. A quick search and you can find tons of related guides and directories, as its legal to own a scanners in the UK but not legal to listen to it. Which meant it’s really been impossible for anyone to enforce and stop people doing it in personal spaces.

Some may recall the artist Scanner, who took his name from the police device,  he made music from telephone calls which could be picked up from a police scanner,  these days only some of the very old cordless phones can still be picked up.

Scanners pick up parts of the radio spectrum reserved for other uses outside of conventional radio, shipping, CB etc however all of the key emergency services have now moved to digital and are encrypted but it seems there are still signals to pick up across the spectrum with modern day devices: marine, aircraftbut and other local uses perhaps less exciting to those looking for some drama.

Aviation uses AM radio frequencies rather than FM as it allows more than one signal to come through and doesn’t block so distress signals can be heard even if pilots are on the same frequency.

I found a US radio hack to turn your FM radio in to a scanner so I had a go trying to make a few old sets into scanners and enlisted Dan at Tinkersonic to lend a hand. It worked in terms of moving the radio off the dial and on to the higher frequencies but sadly didn't pick up anything to listen to in the wilds of Kent, but I want to try again with a better radio in a better location. Anyhow here are some of the photos I took of the radios hacked open and modified, which looked great just didn’t sound very exciting. 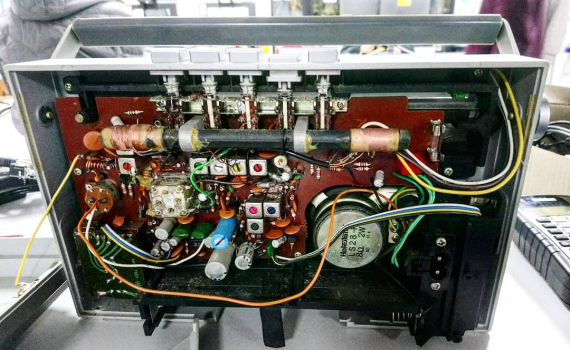 I also discovered a man, who has just started his own radio spy museum in his shed in Dover and has put me contact with experts who currently work in the radio communications industry, they work for ICOM who sell some serious kit and know loads about radio tech and agree the golden age of the radio scanning craze is over and they sell them, amongst other large scale radio telecommunications devices for air land and sea which are still very much in demand.

I want my installation work to highlight how much radio activity still happens across the spectrum in the Heathrow area, past and present and so my next port of call on the blog will look at drones and how radio is used to disable them.