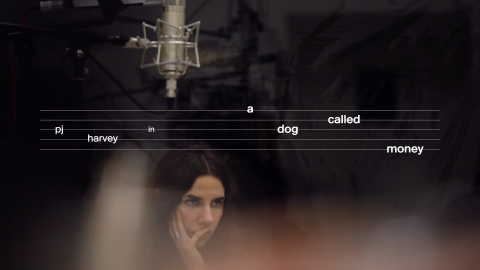 A uniquely intimate journey through the inspiration, writing and recording of PJ Harvey’s new record which was influenced by her travels with award-winning war photographer and filmmaker Seamus Murphy.

Seeking first-hand experience of the countries she wanted to visit, Harvey and Murphy hatched a plan that would see Harvey accompany Murphy on some of his worldwide reporting trips, joining him in Afghanistan, Kosovo and Washington DC. Whilst Murphy collected images, Harvey gathered impressions, sounds, voices and words which would become poems, songs - then an album (The Hope Six Demolition Project). The outcome was an unprecedented art experiment in Somerset House, London in a specially constructed room behind one-way glass, where the public and cameras were invited to watch the five week process as a live sound-sculpture.

A Dog Called Money not only captures the immediacy of Harvey and Murphy's encounters with the people and places they visited, but shows the humanity at the heart of their work and its special metamorphosis into recorded music, and, ultimately, cinema.

Director Seamus Murphy joins us for a Q&A after the Thu 7 Nov screening.