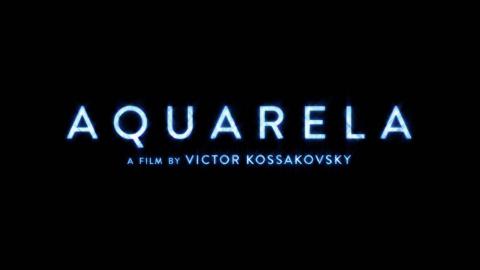 From epic waves to shattering ice lakes, filmmaker Victor Kossakovsky dives into the magnificent and terrifying beauty of water in this ravishing visual feast of a documentary.

Tides rise and fall. Rain erupts from our skies. Mountains of ice move and break apart as if they had a life of their own. Scoping the precarious frozen waters of Russia’s Lake Baikal, to Miami in the throes of Hurricane Irma, to Venezuela’s mighty Angel Falls, Aquarela takes us on a deeply cinematic journey around the aquatic world in the ultimate immersive experience. Through technological ingenuity and crazy human bravado, Kossakovsky has captured water's many personalities in startling clarity. Unspooling without voice-over or on-screen descriptions, H2O is this film's main character – allowing us to immerse ourselves in her awesome implacable beauty.

Capturing its rapid, crystalline fluidity of movement at a rare 96 seconds per frame, Aquarela is a sense-pumelling ride that will delight, frighten, and provoke. Described as "the most metal documentary about water you will ever see" (we love the music from the appropriately named classical/metal band Apocalyptica), this is a visceral wake-up call that humans are no match for the sheer force and capricious will of Earth’s most precious element.