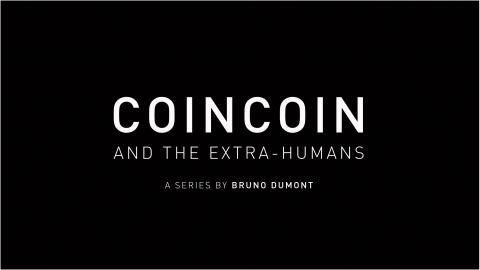 French director Bruno Dumont (Hors Satan), once better known for his weighty tales of spiritual suffering, made an unexpected foray into deadpan comedy in 2015 with the slapstick police procedural Li’l Quinquin. This apocalyptically farcical follow-up, once again featuring Bernard Pruvost as the highly memorable police captain, is another absurd and macabre adventure featuring aliens, refugees and madcap cops that centres around an investigation into some seriously whiffy business.

In a seaside no-wheres-ville in Northern France we find young kid Li’l Quinquin is all grown up - a surly, horny teen who now goes by the nickname CoinCoin. Hanging out on the Côte D’Opale, he attends meetings of the Nationalist Party with his childhood friend Fatso, but finds his old love, Eve, has abandoned him for Corinne. Meanwhile on the outskirts of the town a strange magma (which might either be a cow pat or something extra-terrestrial) has mysteriously appeared, and the inhabitants of this sleepy backwater have suddenly started behaving very weirdly. So it falls to two men - our beloved heroes Captain Van Der Weyden (Pruvost) and his loyal assistant Carpentier (Philippe Jore) - to investigate and make sense of this and all manner of other strange goings on. Their conclusion? “It’s the apocalypse. The end of the world” and they quickly begin to suspect an alien attack. The Extra-Human invasion has begun…

A police investigation like few others, Pruvost’s performance as Van Der Weyden once again binds everything together (his captivating collection of physical ailments and bodily tics feels like a combination of Jack Sparrow, Inspector Clouseau, and Charlie Chaplin). Coincoin also once again shows off the comedic if not necessarily the lighter side of its director, adding up in the end to another alternately (and sometimes simultaneously) hilarious and unsettling whole.

Followed by a Q&A with director Bruno Dumont

Preview: Coincoin and the Extra Humans Parts 3 & 4 Film
Please note: This was screened in Jan 2020 Bruno Dumont's apocalyptically farcical follow-up to his 2015 deadpan comedy Li’l Quinquin is another absurd and macabre adventure featuring aliens, refugees and madcap cops centred around an investigation into some seriously whiffy business.  Find out more