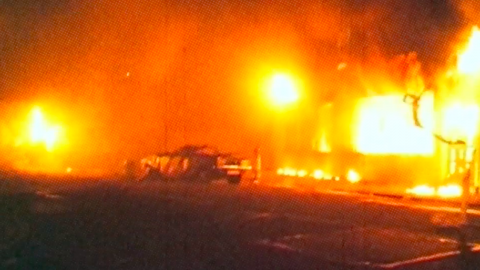 Join creative collective CARGO Movement for a short film screening and panel discussion on the legacy of the Transatlantic Slave Trade in Bristol.

On Sun 7 June Bristol's connection to the Slave Trade became international news - but its legacy has been shaping the lives of Bristolians for centuries. During this livestreamed event, CARGO Movement will share their short film UPRISING, and a trailer for the upcoming short film 1791, before a panel discussion hosted by CARGO writer, Executive Producer and Pervasive Media Studio resident Lawrence Hoo.

The discussion will look back at the St Pauls uprising of 1980 and discuss the Black Lives Matter movement in 2020 before the panellists share their thoughts on what the future may hold. The special guests include:

Vyleen Maximen
Featured in the film, Vyleen is a St Pauls resident who was a young expectant mother at the time of the 1980 uprising

Clive Smith
Featured in the film, founder of AS IT IS TV and St Pauls resident at the time of the 1980 uprising

CARGO Movement is a creative collective developing digital heritage resources for schools and the broader public. These include films, immersive exhibition design and the “CARGO Classroom” education tools. Its founders have long been dedicated to broadening Bristol’s understanding of its History in relation to the Transatlantic Slave Trade and its living legacy.

CARGO is a producer of films and interactive online content of exceptional quality, which evocatively celebrate the resilience and visionary leadership of black individuals who catalysed change and moved society forward. CARGO puts forward those missing narratives from our past and inspires the public to visualise a future full of pride and possibility. Watershed is one of CARGO Movement's partner organisatons.

This event is part of the Bristol Arts Channel

Watershed stands in solidarity with Black Lives Matter News We are FOR equality and ANTI-racist. The global events of the last few weeks, the injustices faced by Black people in the UK and the clear demands for change in Bristol on the weekend of 7 June, speak powerfully to the need to make real commitments.  Find out more