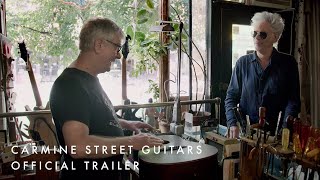 At the heart of Greenwich Village, New York, amidst the newly developed luxury restaurants and boutique clothing stores, sits Carmine Street Guitars; a sacred destination for the world’s most notorious guitar players and musicians.

In the humble woodworks of Carmine Street Guitars, owner Rick Kelly and his apprentice Cindy Hulej, build custom handcrafted guitars out of reclaimed wood from old hotels, bars, churches and other local buildings. During a time in which we are learning to appreciate the value of independent, locally-owned stores, Ron Mann’s documentary is a strong nod to the resilience against growing gentrification and to the gradual embrace and support of shop-owners who dedicate their time and craft to the community.

Featuring a cast of prominent musicians and artists, and some virtuoso performances, the film captures five days in the life of one shop that remains resilient to the all-too-quickly vanishing way of life.