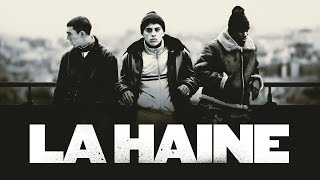 Simmering hostility and prejudices boil over in Mathieu Kassovitz’s provocative and compelling portrait of a Parisian housing project.

Set in the aftermath of a riot, three friends – Vinz (Vincent Cassell), Hubert (Hubert Koundè) and Saïd (Saïd Taghmaoui) – trapped by their economic, ethnic and community circumstances, navigate the escalating urban discontent. But, with tensions still high and the threat of violence ever-present, the trio drift towards an increasingly dangerous destiny.