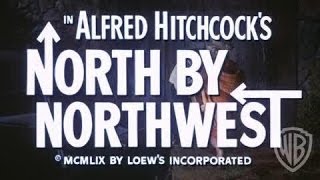 The master of suspense Alfred Hitchcock is at his most playful and entertaining in this gloriously colourful cascade of thrills, spills and mistaken identity. Roger Thornhill (Cary Grant), an innocent man, is mistaken for a wanted fugitive and pursued across North America by a foreign spies trying to kill him, as well as the police who suspect of him of murder. The epic chase leads him deeper into the world of espionage and into the arms of the glamorous Eve Kendall (Eva Marie Saint).

Hitchcock always had a store of visual ideas - a chase across the Presidential heads of Mount Rushmore here, a scene where the hero is stranded in the middle of nowhere, there. It took a partnership with scriptwriter Ernest Lehman to join the plot dots to craft the cinematic ride that became North by Northwest.

Grant is on charming suave form rising to the playfulness of Hitch’s vision as the wrong man befuddled and bemused by the circumstances he find himself in - his double takes match the best of any comedy actor. However it is the whole Hitchcock package from Saul Bass’s striking opening graphics and Bernard Herrmann’s driving score to murder in the UN building and that last perilous chase over Mount Rushmore all shot in the high resolution colour of VistaVision that make North by Northwest an enjoyably thrilling cinematic experience.

Join our friends at the Cary Comes Home festival when it returns from Fri 20 - Sun 22 Nov. Find out more at www.carycomeshome.co.uk