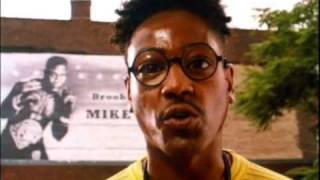 One of the defining works of American independent cinema, Spike Lee’s incendiary look at race relations in America circa 1989 remains a pulsating homage to life on New York's streets and maybe the best film ever made about race in America.

In the predominantly black neighbourhood block of Bedford-Stuyvesant, Brooklyn on the hottest day of the summer, Mookie (Spike Lee) delivers pizzas for Sal (Danny Aiello), an Italian-American who runs a restaurant with his sons, one of whom, Pino (John Tuturro), refuses to curb his racist slurs. Hostility builds when pizzeria regular Buggin’ Out confronts Sal about the photos of only white men on his wall. And as Radio Raheem provides a blasting soundtrack from the boom-box he carries at all times, friction intensifies, the mercury rises and tensions are about to reach melting point.

A joyful, tumultuous masterpiece, Do The Right Thing was, and remains, a true one off. A glorious, adrenal 120-minute cluster bomb of ideas and provocations, Lee’s astounding debut established him as a young filmmaker with no apparent fear of failure, his stylistic swagger and sprawling narrative flawlessly and hypnotically capturing the crazy realities of urban life.