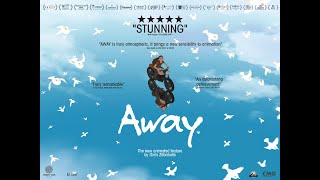 After a mysterious crash landing, a young boy travels across an exotic island on a motorcycle, trying to escape a dark spirit and return home.

Along the way he makes a series of connections with different animals and reﬂects on the possible ways he ended up on the island. Part dream, part reality, Away explores our common, universal need to ﬁnd a connection.

Written, produced, directed, scored, and animated entirely by award winning Latvian filmmaker Gints Zilbalodis, Away was beautifully crafted over three and a half years and developed from a previous short Zilbalodis had been working on. The story, told without dialogue over a series of breathtaking backgrounds, is equally inspired by reality, dreams, and waking fantasies.