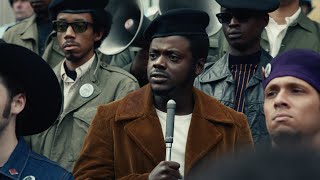 The real-life story of Fred Hampton, the gifted civil rights leader who rose through the Black Panther party to became chairman of the Chicago chapter, is often missing from history. And even lesser known is the role that petty criminal and FBI informant William O’Neal played in his downfall.

Shaka King, in his big-screen directorial debut, tells both their stories with complexity and careful precision, in this fast-paced and hard-hitting drama, fused together with gripping editing and stunning cinematography. At the centre of it all, pulsing through the film is a trilogy of exceptional and electrifying performances from Daniel Kaluuya (who won the Golden Globe, BAFTA and Oscar® for Best Supporting Actor for his portrayal of Fred Hampton), LaKeith Stanfield as William O’Neal and Dominique Fishback in a heart-breaking turn as Hampton’s partner Deborah Johnson.

Simultaneously a taut crime thriller, a visceral emotional drama and an immersive piece of important American history, Judas and the Black Messiah is one of the most compelling and essential films you will see this year.