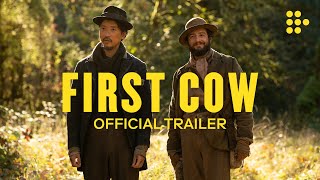 Award-winning director Kelly Reichardt (Meek’s Cutoff, Wendy and Lucy) returns with the intensely pleasurable First Cow, a gripping and glorious story of friendship and petty crime on the harsh frontier of the Pacific Northwest.

In 1820s Oregon, a taciturn loner (John Magaro) and skilled cook travels west to Oregon Territory, where he meets a Chinese immigrant (Orion Lee) also seeking his fortune. Soon the two team up on a dangerous scheme to steal milk from the wealthy landowner’s (Toby Jones) prized Jersey cow – the first, and only, in the territory – to create delicious fried cakes for sale at the market.

With this simple premise, Reichardt paints an authentic portrait of harsh frontier life in the early nineteenth century, depicting the immense, unsettling quietude of rural America and interrogating the very foundations on which the country was built.

Combining sumptuous cinematography with a gently melancholic tale of pilfered dairy, sweet cakes and old-fashioned camaraderie, First Cow is the celebrated magnum opus of one of cinema’s most vital independent filmmakers.