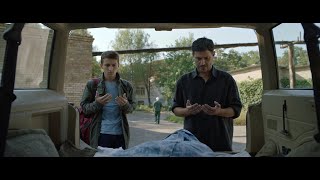 When Mustafa’s (Akhtem Seitablayev) oldest son is tragically killed in the war between Russia and Ukraine he decides to take the boy’s body to his native land: Crimea. Together, he and his younger son Alim (Remzi Bilyalov) set out on a journey that will profoundly mark their relationship.

There is a tension between the pair as city life has exacerbated the generational gap between Mustafa and Alim. However, one of the things that still unites them is their shared language of Crimean Tatar. As they face many obstacles on their journey home, including the rapid decomposition of the body they are transporting, Alim struggles to accept his father's determination to uphold tradition at all costs.

Visually striking, this is a rare insight into the lives and traditions of Crimean Tatars, and a beautiful telling of the dynamics and complexities of the father and son relationship.