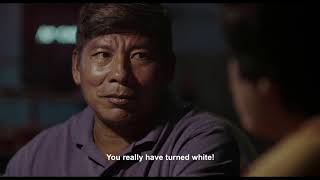 Filmmaker Maya Da-Rin’s debut feature is a mesmerising tale that explores desire, tenderness, and the friction between two worlds – the industrialised, metallic, cold city and the lush, tranquil Amazon rainforest.

Justino, a member of the indigenous Desana people, works as a security guard at the chaotic cargo port in Manaus. Since the death of his wife, his main company is his youngest daughter, Vanessa whom he lives with on the outskirts of town. A nurse at a health clinic, Vanessa is accepted to study medicine in Brasilia and so will leave soon.

Confronted with the oppression of the city, where he has never quite fitted in, and the longing for his native village from which he left twenty years before, Justino finds himself condemned to an existence without place. As the days go by, he is overcome by a strong fever. During the day, Justino fights to stay awake for his work whilst at night, some kind of dark, amorphous mysterious creature follows his footsteps. The Fever turns Justino's slices of reality into a waking dream, a realm between states of consciousness—reflecting the way that Justino feels increasingly caught between two conflicting worlds.