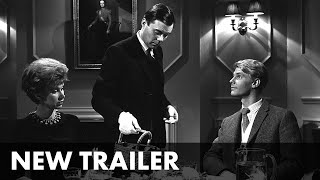 A sinister manservant begins a series of psychological games in an attempt to gain superiority over his wealthy upper-class employer in this psychological class war drama, now gloriously restored, from Joseph Losey and Harold Pinter.

Dirk Bogarde stars in one of his finest roles as Hugo, the manservant hired by young, wealthy Tony (James Fox) to keep his household in order. Things begin to dramatically change, however, as Hugo slowly, and clinically, starts to take control of Tony's life: financially, mentally and physically.

With BAFTA-winning cinematography from Douglas Slocombe, The Servant is a thrilling and intense masterpiece of British cinema and exploration of class that is not to be missed.