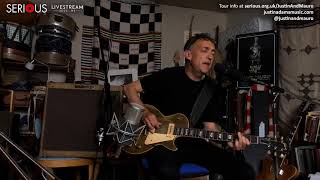 Join us in the Café & Bar for a live set of guitar and gimbri courtesy of guitar maestro Justin Adams and Moroccan Gnawa master Mohamed Errebbaa.

From Adams’ work with Jah Wobble’s Invaders of the Heart to collaborations with Robert Plant, Tinariwen, Rachid Taha, and Juldeh Camara, his connection with the trance music of North Africa has always been an integral part of his sound. This new project sees him team up with Errebbaa, who began performing with traditional Sufi brotherhoods in Rabat, Morocco at the age of 10, and received the title of Maalem, (master of the Gnawa tradition) at the age of 28. They will be joined on drums by Dave Smith, long term collaborator with Adams, who also leads his own outfit ‘ Fofoulah, mixing Senegalese polyrhythm with Jazz fire and Electronica and Moroccan percussionist, Idriss Yamdah completes the line-up, a Gnawa adept from Agadir.

Their live set will harness the deep trance power of the Gnawa repertoire and showcase new material, bringing elements of desert blues and heavy groove to lift the spirits.

Afrika Eye Season Afrika Eye is back, after a year of not being able to connect with our audiences, we have a live programme across the city exploring global issues with Africa as the focus.  Find out more