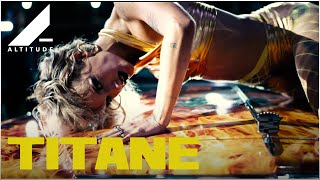 Agathe Rousselle makes a ferocious debut as a killer on the run, in director Julia Ducournau’s electrifying Palme d’Or-winning techno-chiller.

Unnerving newcomer Agathe Rousselle stars as Alexia, a young woman who has a titanium plate fitted into her head after a car accident as a child, and consequently develops an unusual connection to cars. As an adult she makes her living dancing at car shows until a violent altercation with a fan sends her on a bizarre, unpredictable journey (for both Alexia and us).

Gender fluidity, familial subversion, techno-sexual delirium and full-on violence make Titane (French for titanium) extreme-dream cinema at its very best… it’s a film with drive like no other.

Conversations About Cinema: Thought in Action 2022 Article Starting with Titane, we continue our partnership with UWE Philosophy and Politics on a series of screenings and discussions that brings together a multi-disciplinary team of philosophers, political theorists, and cinema curators to explore some of the most exciting and challenging ideas in contemporary cinema. Francesco Tava, Associate Professor in Philosophy at UWE, Emma Brännlund, Senior Lecturer in Politics and International Relations, and Miguel Prado Casanova, Senior Lecturer in Philosophy, write more about the first film in the new season.  Find out more