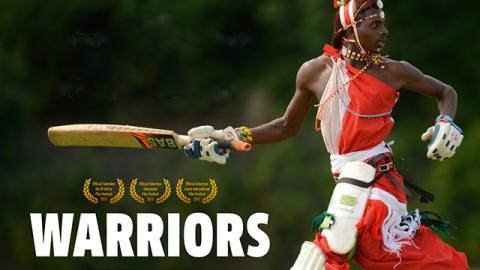 Warriors is a documentary following a group of young Maasai who, in a remote region of Kenya, have remarkably formed a cricket team. They relate the sport to their traditional hunting techniques – the ball is the spear, the bat is the shield – and their flowing red robes in full flight are an awesome sight. The film follows the team as they pursue their dream of reaching England, the home of cricket, and test themselves in the amateur Last Man Stands World Championship.

But there is a darker heart to the story. The Maasai are male dominated, women have few rights – even to their own bodies – and girls as young as six have suffered Female Genital Mutilation and early marriages. Traditional practices such as these have also contributed to the spread of HIV/AIDS, and now many believe the future of the Maasai is under serious threat. The Warriors cricket team are using their new-found unity on the field as an inspiration to those off it, attempting to educate and give young people a sense of belonging, support and hope.

However, they face resistance from the elders of their community – well-respected and wise men who hold all Maasai traditional practices dear and carry great influence. They fear losing any of their traditions will herald the end of the Maasai. Can cricket really bring change to the region?

Followed by a Q&A with director Barney Douglas and Integrate Bristol's Liza Zimmerman.

This event is presented in partnership with Integrate Bristol with promotional support from Afrika Eye.