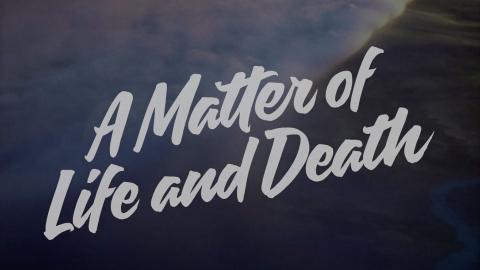 In the hands of the peerless Powell and Pressburger love does indeed become a matter of life and death in this audacious, inventive and mischievous romantic masterpiece, perfect for the festive in-between period.

Intended as part of a soft propaganda campaign to strengthen relationships between Britain and America during WWII A Matter of Life and Death sets up the ideals of both to be argued for in that highest of courts: heaven! Both countries are embodied in the central characters of Peter D Carter (David Niven), an English bomber pilot en route back from a bombing mission over Europe with a pranged kite, no parachute and certain death, who charms the heart of June (Kim Hunter) an American radio operator who has the last conversation with Peter before his plane goes down.

Miraculously Peter survives, meets June in the flesh, and they fall hopelessly in love. However, in the afterlife Peter was supposed to die and remains unaccounted for, something which simply doesn’t happen - thus instigating a struggle between life, love and death, and a celestial court case which will determine Peter’s fate. Will love conquer all? Playfully moving between a richly coloured real life and a dourly regimented black-and-white afterlife this is a pinnacle of British filmmaking with stunning cinematography, fantastical set pieces, lyrical writing and passionate performances.