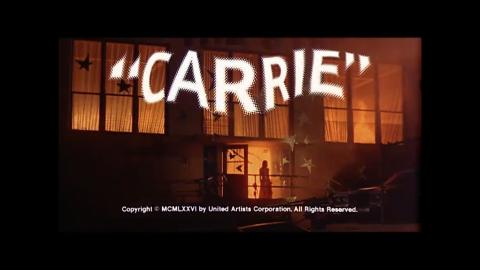 It’s a teenage tragedy, very beautiful, and also a love story. It’s this mixture of sensitivities that I really like in De Palma’s films. He is one of the most genius filmmakers alive.

Sissy Spacek is heartbreaking as the telekinetic Cinderella who turns her school prom into a bloody massacre in Brian De Palma’s horror classic.

De Palma's adaptation of Stephen King's debut novel sees Carrie, a shy, withdrawn teenager discover she has paranormal powers, which she uses to protect herself from her abusive mother and classmates. When a friendly student invites her to the prom, she is determined to enjoy herself and is amazed when she is crowned queen of the ball - but joy turns to fury when her tormentors play a cruel prank.

An unforgettable package of pop psychology and psychic phenomena, De Palma’s innovative visual techniques, combined with his fascination with themes such as guilt and sexuality mean Carrie remains a transfixing experience.

Blood + Homage: The Cinematic Obsessions of Yann Gonzalez Season A master of homage with a killer eye for detail, to mark the release of Knife + Heart, our Sunday Brunches in July are a nod toward some of visionary French director Yann Gonzalez key influences – a cinematic trip across the varied landscapes of trash and exploitation cinema, the experimental and underground to the European art house.  Find out more