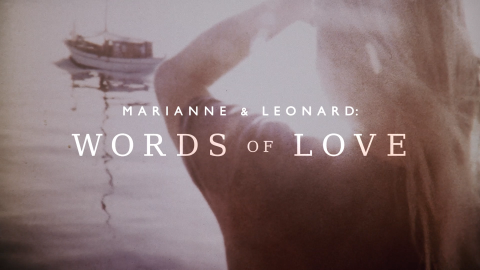 Veteran documentarian Nick Broomfield’s (Kurt and Courtney, Whitney: Can I Be Me?) latest tells the beautiful yet tragic love story between musician Leonard Cohen and his Norwegian muse Marianne Ihlen.

Leonard Cohen met Marianne Ihlen amongst the bohemian community of foreign artists, writers, and musicians on the Greek island of Hydra in the early 1960s. Here, the young Leonard struggled with his dreams of becoming a writer, and Marianne, alone with her young son, was trying to get over a failed marriage. It was the beginning of a mythical love story – a tumultuous but close relationship, which evolved when Leonard became a successful musician, yet followed them for the rest of their lives, leading to immortal songs such as 'So Long, Marianne' and 'Bird on a Wire',

Through old film clips and interviews, Broomfield exposes the beautiful and quintessentially romantic story right up to the last, heartbreaking line, when they both left us just a few months apart in 2016. Broomfield's film also draws a picture of the fascinating Cohen, with that deep voice that could sing its way into your heart, but who nonetheless met his match in the inspirational power that Marianne possessed.