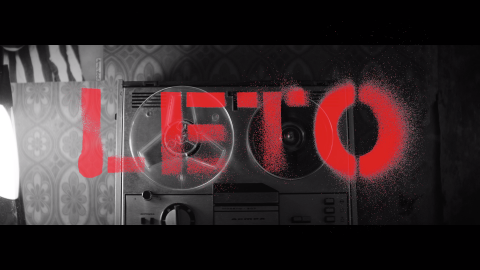 Based on the true story of popular Soviet band Kino, Kirill Serebennikov’s vivid, playful evocation of the Russian underground music scene just before Perestroika, revolves around the musical rivalry between rocker Mike (Roma Zver) and newcomer Viktor (Teo Yoo), who clash over politics, influences and the affections of Mike’s wife Natasha.

It’s summer in the early eighties in Leningrad (now St. Petersburg) and the underground music scene is boiling. Rock devotees await the latest imported albums and bootleg recordings from the west, eagerly consuming forbidden music by the Beatles, Dylan, the Velvet Underground, Bowie and the Doors, alongside new wave masters like the Sex Pistols, the Clash and Blondie. Amidst all this covert cultural fervour, Mike (Roman Bilyk), a singer with a wildly popular band, lives with his girlfriend Natasha (Irina Starshenbaum), and their baby in a cramped shared apartment. But their relationship is complicated by the arrival of Viktor (Tee Yoo), who has a band of his own and is eager to make a name for himself…

Rock n’ roll has always been an act of rebellion but never more so than in the Russia of the 1980s. As the political repression of the USSR was entering its final decade, pre-Perestroika kids had to work hard to hear rock ’n’ roll. An exhilarating exploration of freedom under restraint, Serebennikov’s film (finished whilst the director himself was under house arrest) captures the sheer thrill of being young and making music in a time and place when it really matters.

Please note: LETO contains a sequence of flashing lights which might affect customers who are susceptible to photosensitive epilepsy.

Presented in partnership with Mubi.