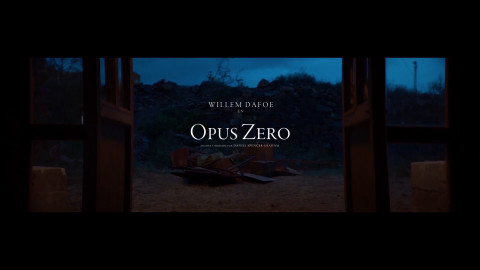 In director Daniel Graham’s debut film, Willem Dafoe stars as an American composer looking for answers to an artistic puzzle in a remote Mexican village following the death of his father.

Paul (Dafoe) is a composer whose life’s work has been dedicated to the completion of an unfinished symphony from the early 20th century by the little-known Alexander Grondahl. When Paul’s estranged father dies, he travels to a remote Mexican village to settle his affairs where he discovers a photograph of a young woman – a friend of his father - whom he becomes determined to find. As Paul continues his search, Daniel (Andrés Almeida), who is part of a three-person film crew, arrives in town looking to complete a documentary, piecing together seemingly unconnected vignettes of village life, unaware that a miracle is about to be gifted to them when their paths cross.

Featuring excellent performances (especially from Defoe) Opus Zero charms with its spiritual yearning and its blackly comic elements that mix with the mystical. A small but powerful film that meditates on ideas of culture, philosophy and the nature of death with both subtlety and ambiguity.

Our Time Please note: This was screened in Aug 2019 A couple’s relationship begins to crumble when the husband can’t control his jealousy in Mexican director Carlos Reygadas’ heartfelt exploration of marriage and intimacy, which features Reygadas himself and his wife Natalia López in the lead roles.  Find out more The Chambermaid Please note: This was screened in Aug 2019 Former actor Lila Alivé's striking, highly acclaimed debut feature follows the behind-closed-doors life of the kind, conscientious Eve (Gabriela Cartol), who works long hours as a maid in a luxury hotel in Mexico City.  Find out more