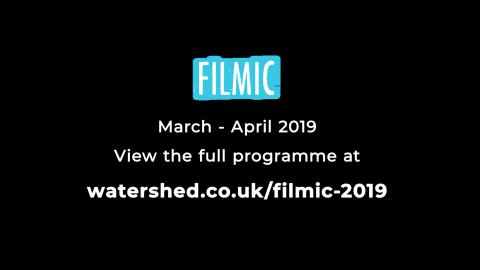 Bristol’s annual film-meets-music celebration returns through March and April for a mix of screenings, concerts, special events and after-shows across the city, programmed collaboratively by Watershed, Colston Hall and St George’s, Bristol.

Join us throughout March and April for all this and more as we seek out and celebrate the creative connections across film and music.

Previous Events in this programme

We Need to Talk About Kevin

classified 15 The Scores of Jonny Greenwood and Thom Yorke
Read More
Please note: This was screened in March 2019
Film
Jonny Greenwood mixed blues and pop numbers with his muted score for Lynne Ramsay’s exquisite adaptation of Lionel Shriver's bestselling novel about a mother left shattered in the wake of her teenage son’s tragic act of rebellion.
Read more We Need to Talk About Kevin

classified 15 The Scores of Jonny Greenwood and Thom Yorke
Read More
Please note: This was screened in March 2019
Film
Following their collaborations on There Will Be Blood and The Master, Jonny Greenwood penned a lighter-hearted, more free-wheeling soundtrack for Paul Thomas Anderson’s wild adaptation of Thomas Pynchon’s cult novel - a groovy, funny mystery set in 1970 drug-fuelled Los Angeles, during the dying days of free love.
Read more Inherent Vice

classified 15
Read More
Please note: This was screened in March 2019
Film
Glenn Close gives a truly masterful performance as a woman who has spent forty years sacrificing her own talent, dreams and ambitions to support those of her husband - until long-kept secrets are threatened to be exposed...
Read more The Wife + introduction with composer Jocelyn Pook

You Were Never Really Here

classified 12A
Read More
Please note: This was screened in April 2019
Film
The key attributes of minimalism, its reliance on repetition, its mesmerising transcendent qualities and innovative use of technology are explored in this two part BBC documentary, as musician Charles Hazlewood seeks out four great American minimalist composers who rebooted classical music in the 20th century.
Read more Tones, Drones and Arpeggios

How to Steal a Million

Posted on Tue 12 Feb 2019
Article
Filmic, Bristol's annual film-meets-music series, returns in March and April for it's eighth edition with concerts, films, talks and events celebrating the creative connections across film and music. Filmic co-founder and producer Phil Johnson looks back at the history of the series, and introduces some highlights from the current programme.
Read more “ Filmic 19 Preview ”