On Saturday night monsters will be among us for a double bill of cult classics from legendary Japanese sci-fi director Ishiro Honda: in Mantago: Fungus of Terror, scientists fall prey to mutated mushroom creatures, while in King Kong vs Godzilla, the two mighty monsters duke it out to see who will rule Mount Fuji. Presented in their English-dubbed versions using glorious 35mm in full super widescreen TohoScope and followed by an After Party in the Café/Bar, this is a triple monster experience (with limited free Asahi beer!) not to be missed!

To get you in the monster mood, writer and commentator on Japanese film and popular culture August Ragone has kindly shared his programme notes, expanded from the ones he produced for the 50th Anniversary Godzilla Film Festival in San Francisco, where he talks about the bizarre and occasionally unfortunate genesis of King Kong vs Godzilla, including much in-fighting, monster suits, and wrestling choreography...

(You can read more about Matango: Fungus of Terror, the other film in the double bill, in this news post)

One of the most misunderstood and maligned films in the Godzilla series; King Kong vs Godzilla had a most bizarre and unfortunate genesis. But, that's Hollywood for you... In the late 1950s, visual effects master Willis O'Brien (King Kong) found no luck in pitching his latest idea, "King Kong vs. Frankenstein", to studios, but it did catch the attention of former Universal producer John Beck. Beck took on the project, but also found it tough going until he came to Toho Studios, who were interested in a return vehicle for Godzilla (and another spectacle for their 30th Anniversary roster, which included Hiroshi Inagaki's Chushingura).

Beck was able to convince Toho to foot the entire licensing fees for King Kong, which amounted to 80 million yen (approximately $250,000 USD in 1962; adjusted to current inflation, approximately $1.8 million USD), which was three times the cost of the average Toho production at the time - this hefty price tag allowed Toho the rights to the character for five years. Almost immediately, the studio execs began slashing the film's budget, and one of the first things cut were Producer Tomoyuki Tanaka's plans to shoot the Farou Island scenes on location in Sri Lanka (instead, they shot the scenes on Oshima Island, 62 miles offshore from Tokyo).

Keeping the budget restrictions in mind, director Ishiro Honda, visual effects director Eiji Tsuburaya, and scenarist Shinichi Sekizawa envisioned an entertainment picture along the lines of Mothra (1961), and screenwriting began in earnest. Cast in the lead was popular actor and comedian, Tadao Takashima (Emperor Meiji and the Russo-Japanese War, 1957), the father of actors Masanobu (Godzilla vs. Biollante, 1989) and Masahiro (Godzilla vs. Destroyah, 1995). He was paired with Yu Fujiki (Samura II: Dulet at Ichijoji Temple, 1955), another comic genius, who was the unbilled "Eiko Maru" radio operator in the original Godzilla - Honda would cast them together again in Atragon (1963).

Actresses Mie Hama (The Merciless Trap, 1961) and Akiko Wakabayashi (Akiko, 1961) became superstars in their own right, and shared the distinction of becoming "Bond Girls" in You Only Live Twice (1967). Wakabayashi gave up acting when she was married in 1968, while Hama pressed on, and is still active today. Rodan's star, Kenji Sahara, plays Hama's inventor boyfriend in a supporting role. Mr. Tako, the greedy Advertising executive, was played by Ichiro Arishima (Young Blood Is Burning, 1947), a physical comedian who was beloved by audiences as the "Japanese Chaplin", and was featured in over a hundred popular films and television shows.

The infamous Kong suit was not up to the par of what Toho's effects department could accomplish, especially in light of the rather effective Abominable Snowman in Honda's Half Human (1955), due to the budget cutbacks imposed because of the high fees in securing the rights to the character. Even so, two suits were constructed, as well as several puppets - apparently, Tsuburaya wanted this incarnation of Kong to appear comical. On the other hand, Godzilla appears more powerful than before, and established the "classic" look of the 1960s.

While the miniature sets were as elaborate as ever, with mountains and rivers, Tsuburaya chose to shoot much the action at normal speed, which doesn't always allow these characters the illusion of mass and size. Tsuburaya also permitted suit actors Haruo Nakajima and Shoichi Hirose to freely choreograph their fight scenes, and they chose Pro Wrestling, which was extremely popular in Japan at the time, and actually came up with some memorable - if outrageous - fight tactics. Still, Honda's version is fast, furious, and entertaining as all get-out, and was never intended to be taken as seriously the original Godzilla. Sekizawa wrote a satire on the rise of rampant commercialization in Japan, also reflected in Yazuo Masumura's Giants and Toys (1958), which is not apparent in Beck's version, and is neutered beyond reproach. 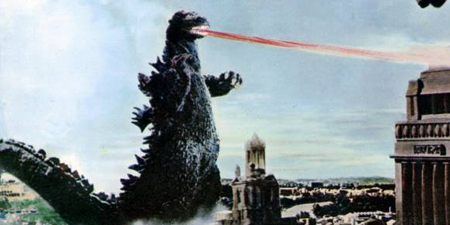 The unintentionally laughable scenes for the US version were amateurishly shot by the unremarkable actor-turned-director Thomas "Tom" Montgomery (The Many Loves of Dobie Gillis, 1961), and were cut haphazardly into Honda's, thus eliminating wonderful sequences from the original, to make room for Michael Keith (The Man and the Challenge, 1960) as the smug "UN Reporter Eric Carter", Harry Holcombe (Kisses for My President, 1964) as clueless "Dr. Arnold Johnson", and James Yagi (Bridge to the Sun, 1961) as the lost "UN Reporter Yutaka Omura".

All save for Akira Ifukube's Farou Island music, the maestro's thunderous stereo score was jettisoned whole by Beck - only to be replaced by jarring Universal library cues because they sounded less "Oriental" (culled from Creature From the Black Lagoon and Frankenstein Meets the Wolf Man). Apparently, Beck (who produced this version for $15,000 and pre-sold it to Universal-International for $200,000) never understood the film, and didn't seem to catch on that it was done as a satire. This was somewhat typical of the mishandling of these films in the early years, and why they are so misunderstood outside of Japan.

Ironically, King Kong vs. Godzilla became the highest ticket-selling film of the entire Godzilla series in Japan (11.2 million tickets), while the US version broke summer box office records for Universal-International the following year. For stealing his idea, O'Brien filed a suit against Beck, but couldn't afford to keep a lawyer to follow through, and passed away before the film was released in the States. In the final outcome, it seems that John Beck was perhaps the most terrible monster of all.

Rife's Parys reflects on the importance of female unity

As Michelle Obama once said, ‘there is no limit to what we, as women, can accomplish.’ Parys reflects on female unity and her influences growing up. More

Aggie takes her camera on a walk around some of the places in Bristol she appreciates most. More