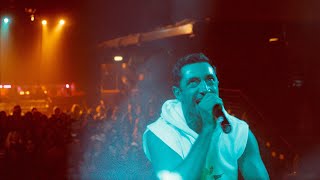 Bassam Tariq’s visceral directorial debut, co-written with Riz Ahmed, finds a British-Pakistani rapper’s life spiralling out of control when, on the cusp of success, he succumbs to a debilitating illness.

Although his cutting lyrics speak provocatively about identity politics, it is not until Zed (Riz Ahmed) returns home after two years on tour that he is called by his real name: Zaheer. But it is the vulnerability of illness and his decreasing mobility that brings both focus and fragmentation – memories and hallucinations merge to the beat of Qawwali music and are haunted by fervent apparitions of a masked figure – conjuring the unspoken spectre of Partition, which looms large in his father’s unspoken words. Further bruising Zed’s ego is his nemesis – RPG, a young rapper whose face tattoos and crass lyrics bewilder him.

Both a paean to the importance of cultural heritage and a sharply observed reflection on muscle memory, the richness of Tariq’s achievement lies in the details of this heady mosaic.

The Eyes Have it Article by Tara Judah We caught up with writer-director Bassam Tariq to find out all about the Evil Eye and shadow conflict in Mogul Mowgli.  Find out more