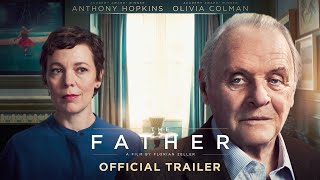 Anthony Hopkins delivers an Oscar®-winning performance with his powerful portrayal of a man dealing with the onset of dementia in Florian Zeller’s screen adaptation of his award-winning play.

Anthony (Hopkins) is 81 years old. He lives alone in his London flat and refuses all the nurses his daughter Anne (Olivia Colman) tries to impose upon him. But the necessity of organising care is becoming more and more pressing, as she’s decided to move to Paris with a man she’s just met.

If that’s the case, though, who’s the stranger in Anthony’s living room, claiming he’s been married to Anne for years? Why does he say that this is the supposed married couple’s home, and not his? There is something going on; the world is no longer logical – are they trying to make him seem crazy? Are they trying to rob him of his flat? And where is Lucy, his other daughter?

Zeller’s brutal, fractured film explores the agonising trajectory of dementia from the sufferer’s point of view, as reality dissembles, crumbles, and finally becomes something that can’t be trusted; whilst also telling the story of Anne, grappling with the painful question of what to do with her father.