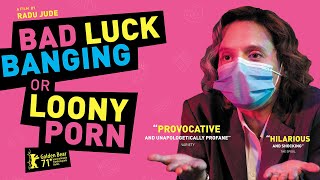 "One of European cinema's most unclassifiable auteurs has delivered the bitter pill we deserve." Indiewire

A respected schoolteacher finds her career and reputation under threat when her personal sex tape is leaked on the internet in Radu Jade’s bold and uncompromising Berlinale Golden Bear-winning satire.

The leaked sex tape that teacher Emi (Katia Pascariu) has made with her husband results in demands for her resignation from her prestigious Bucharest school, but she refuses to surrender, facing her detractors head on at an absurdist parents’ tribunal that becomes an exercise in misogyny and racism.

A darkly comic, grandiose cinematic vision of modern life as unforgettable as its title and its explicit opening sequence (the sex is real and graphic), this is a funny and incendiary commentary on hypocrisy and prejudice in our societies.