Calling all young changemakers and film enthusiasts for a morning of award-winning animated films on the climate emergency, followed by an animation workshop.

Join us as we follow a stork in its colourful migration across the world and explore reintroducing nature to both cities. We will also hear from the Waves of Change young filmmakers, Waves of Change is a project helping young people tell their story about the impact of climate change on communities in Cornwall.

Waves of Change will also run a stop motion animation workshop after the screening, where you can try out exploring climate change through animation before taking your project home to continue the experiments!

This short film programme and family workshop is suitable for children aged 8-14. All children must be accompanied by an adult.

The short films in the programme include:

This event is supported by the Arts and Humanities Research Council (AHRC, part of UKRI) as part of their Research in Film Awards (RIFA) Climate Screenings 2022. The films shown as part of these screenings were shortlisted for the RIFA Best Climate Emergency Film of the Year category 2020/2021 and showcase cutting-edge climate research in the arts and humanities. Free screenings and film events will also take place across Cardiff and Glasgow in April. 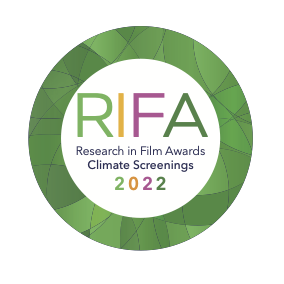 Green Screen: Climate Emergency Films of the Year Season Join us for at Green Screen, a day of free short film programmes, plus a panel discussion and a family workshop all of which celebrates filmmakers and their work to explore cutting edge climate research.  Find out more